Top 11 things to see and do in Zadar

Zadar has been among the best Mediterranean cities for centuries. Here are 11 things to see and do in the city! Also, you can easily explore these in one day and in that order, so let’s get started!

1. Feel the city’s heartbeat at the People’s Square

One of the liveliest places in the city, the People’s square is very popular among the locals. Apparently, it has been so for centuries as this place is the center of the public life here since the Middle Ages! 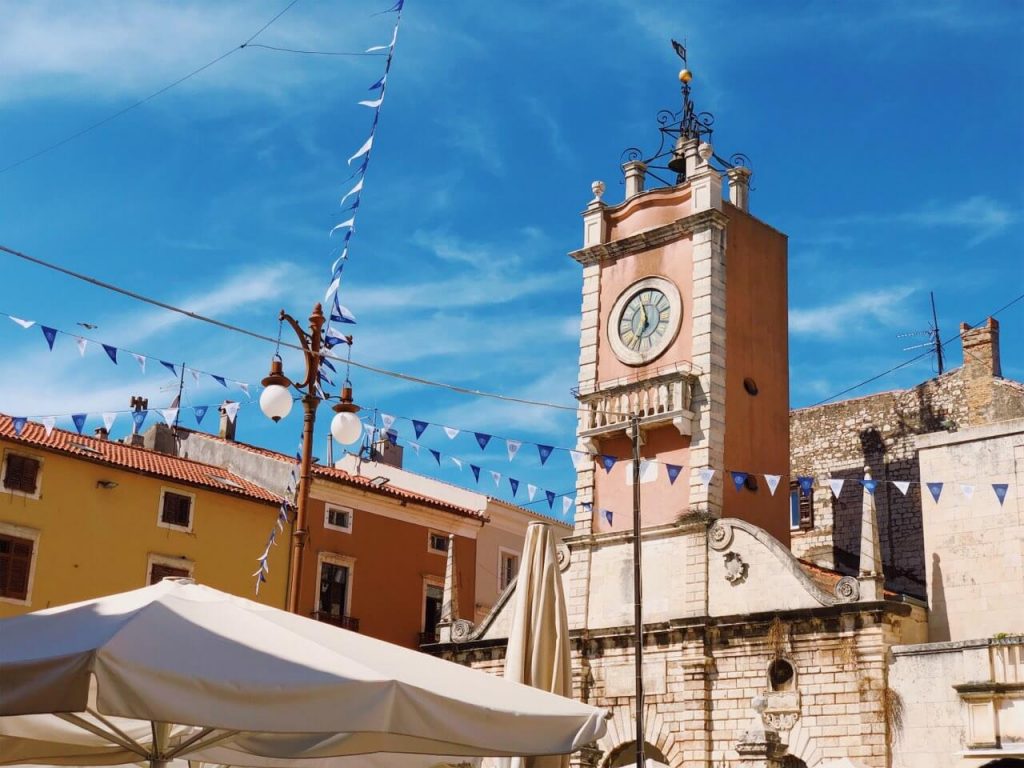 The square is surrounded by the City Guard building with its clock tower, the church of St. Lawrence from the 11th century, the City Loggia and the City hall! Furthermore, some of the coolest café bars in town are here. It is usually difficult to chat in a normal voice around this charming square in Zadar, because of all the other chatting (and loud) people around! 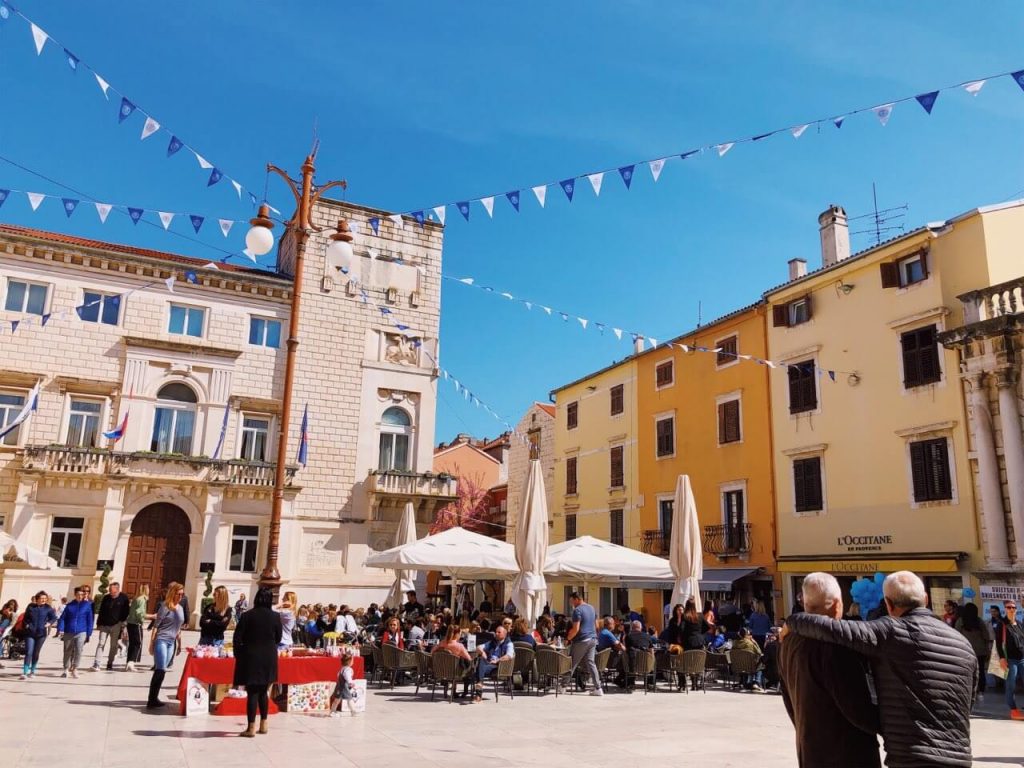 People’s Square on a Saturday

The Roman forum stands here for as long as 17 centuries. Impressive, isn’t it? It consists of ruins of ancient altars, columns, temples and houses. The place is an open museum and you can take a walk here any time of the day.

Despite its age, the forum is very vibrant and full of life, as the whole tourist campaign for Croatia rightly suggests! There is music, children climbing the ruins and people talking loudly at the cafes nearby. 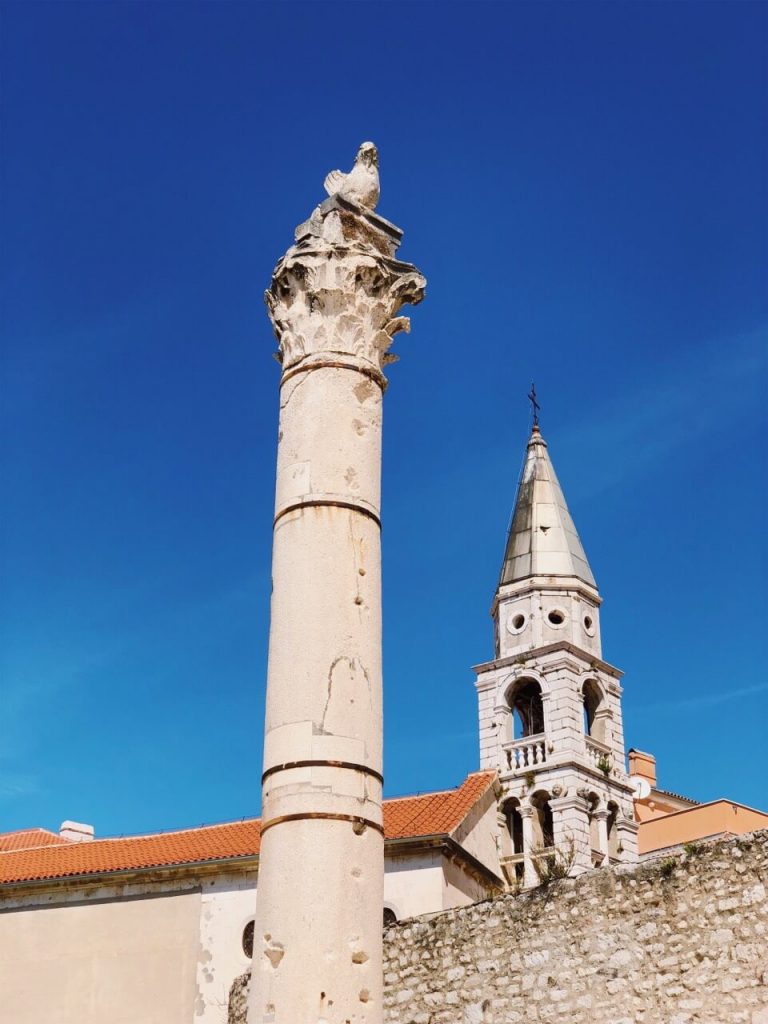 Take a special look at the single Roman column at the center of the ruins. This one was used for a popular practice in the Middle Ages – publicly humiliating criminals in front of Zadar’s residents.

The circular church of Saint Donatus was built in the 9th century and is the largest known Pre-Romanesque structure in Croatia. Its distinct round shape is actually typical of the period.

Today it is no longer serving as a church, but as a museum. The space inside is also used for concerts due to the building’s unique acoustics. Musical evenings in St Donatus is a music festival held annually since 1960 in the church of St. Donatus. The 59th edition of the fest starts on July 9th 2019 and will last for a month. 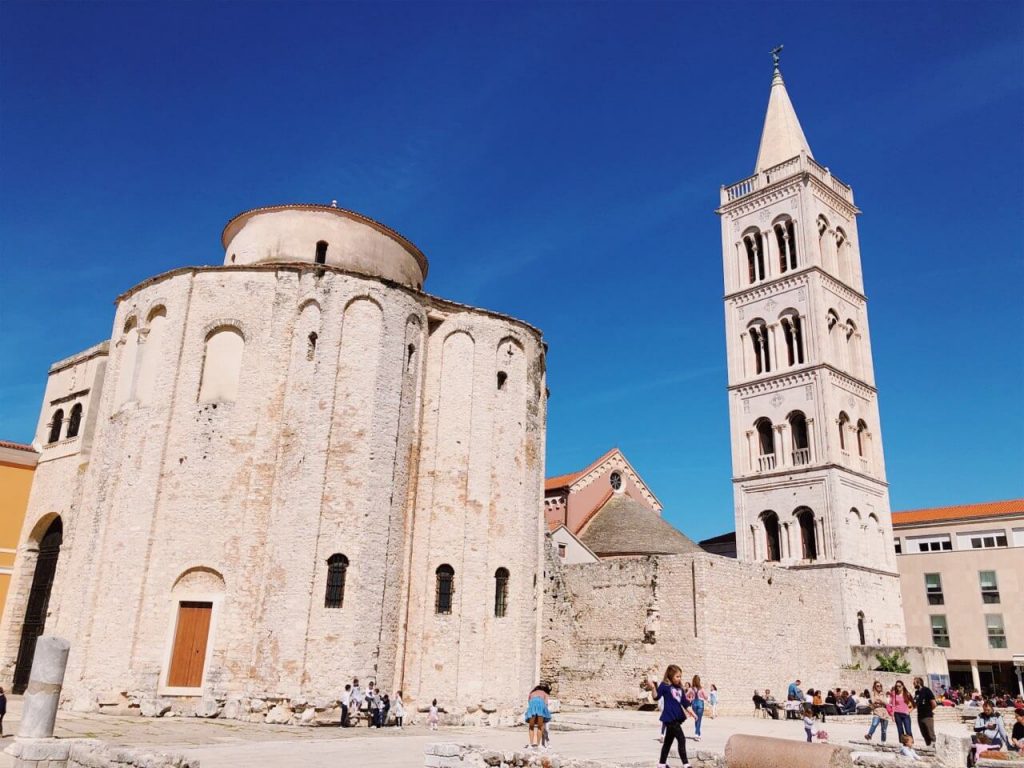 St. Donatus church is one of symbols of Zadar

St. Anastasia, also known as Zadar Cathedral, is the biggest cathedral in Dalmatia. It was built at several stages between 12th and 14th century, while its oldest parts are an even earlier Christian church. 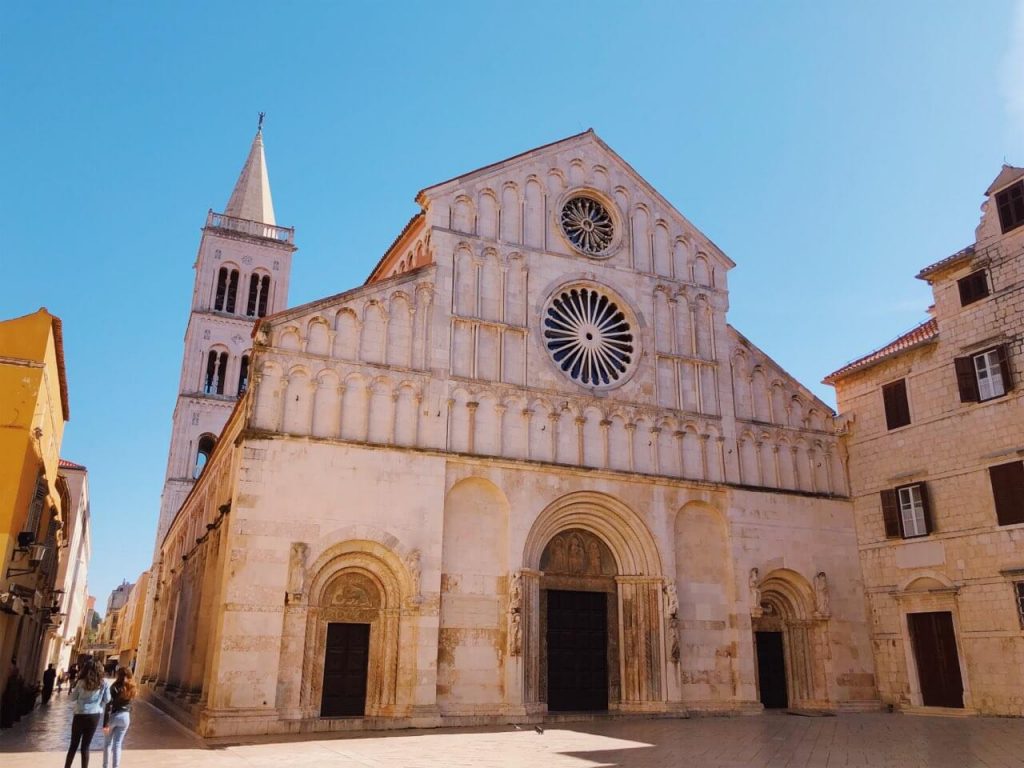 The entrance of St. Anastasia, also known as Zadar cathedral

One of the landmarks of Zadar, the bell tower of St. Anastasia, is right next to the St. Donatus church and it often wrongly assumed to be part of that church.

If you climb the 180 steps to the top, you’ll see Zadar at 360 degrees. We skipped this one last time in Zadar, as we were with baby Anna. 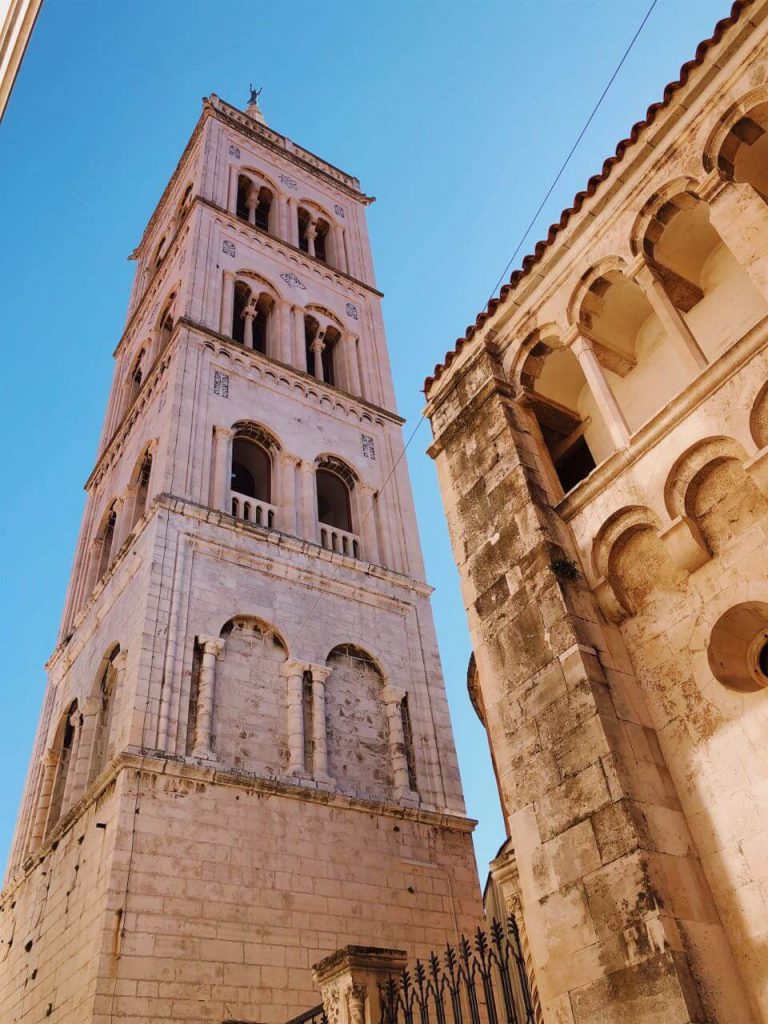 The view from the bell tower is awesome!

5. Get to know the old town of Zadar

Wandering around the streets of the old town is an attraction on its own, as it happens with many other Mediterranean cities. Take your time to enjoy the charming narrow stone-paved streets.

Plus, there is always something happening in Zadar, especially in the old town, so be sure to check out Zadar Tourist Board site for the upcoming events. 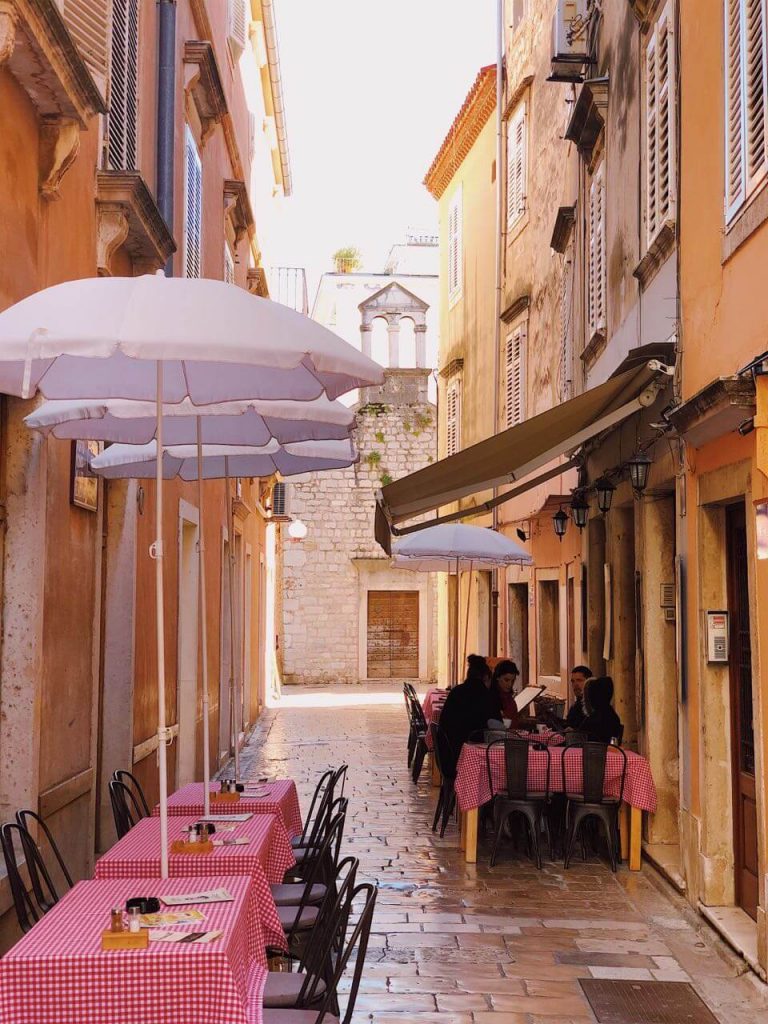 How charming, don’t you think?

6. Have a drink at the Five Wells square

The Five Wells square is a fine example of what the Venetian rule brought to Zadar in terms of both architecture and progress! The five wells that gave the name to the place are still here today, but no longer in use. They used to be an essential source of water in the Middle Ages.

These days the square is a popular spot for going out at night and meet people. 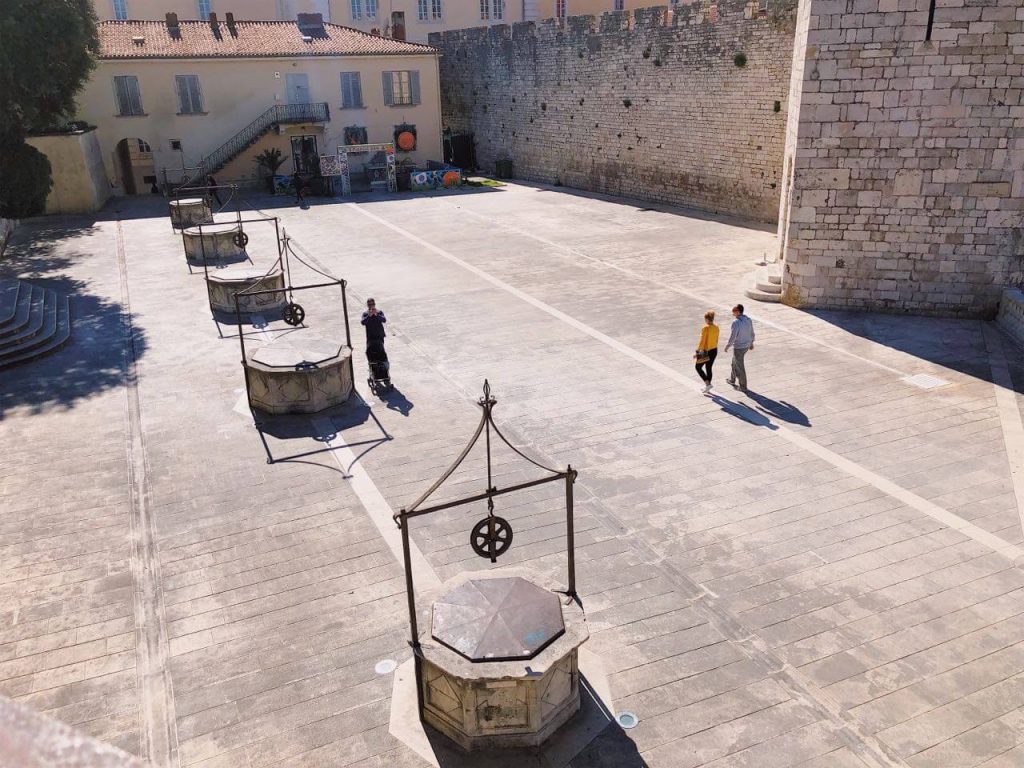 The Five Wells square in the spring of 2019 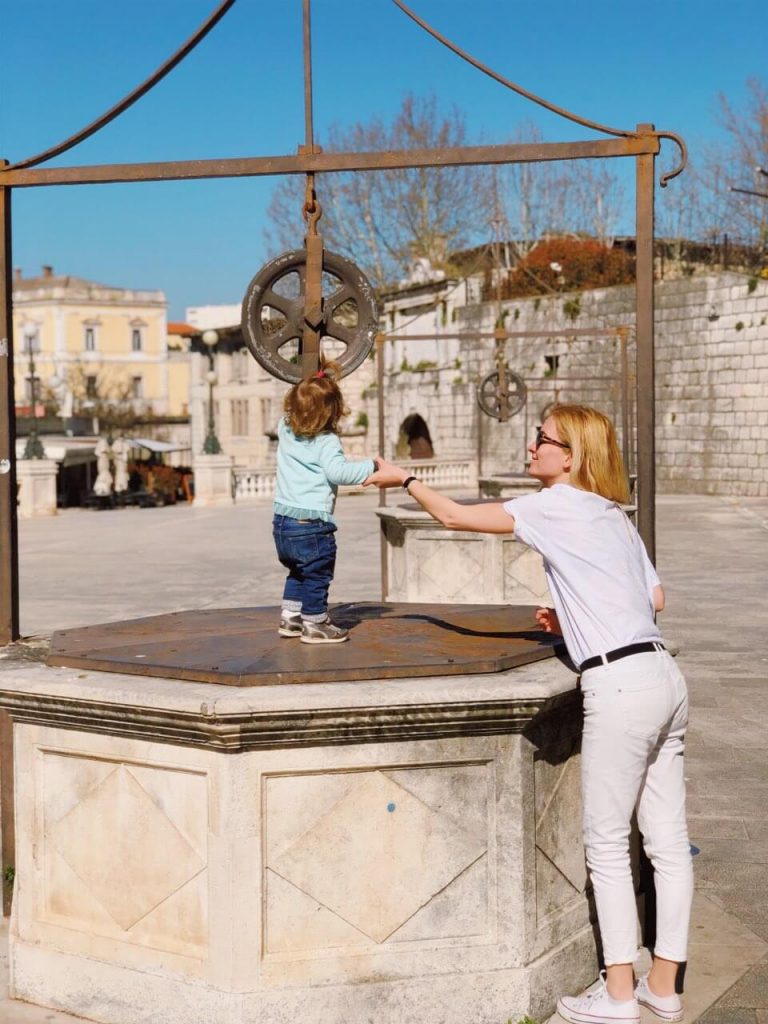 Queen Jelena Madije Park was founded back in 1829 and is the oldest public park in Croatia. Located next to the Five Wells Square, the park provides an excellent view to the Land Gate of Zadar (#8 on this list) and the sea.

Walking around, you’ll definitely feel that the place is old school as the parks of today are designed somewhat different. The park is a lovely spot to take a break from the old town and relax. There is also a café right above the Five Wells Square. 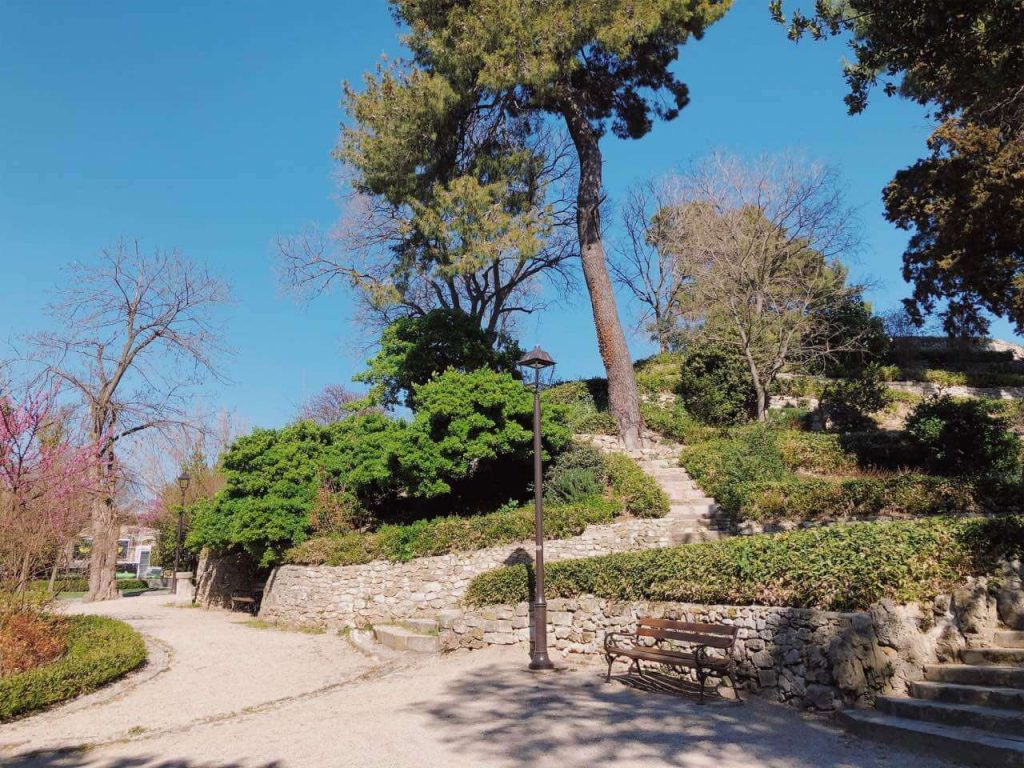 Great to have a park in the city center!

8. Appreciate the city walls and gates

Being a medieval city-fortress, Zadar is surrounded by spectacular city walls and gates. There are several historic gates that will lead you to the old town of Zadar. The largest and most impressive of them is the Land Gate. Built in 1543 by the Venetians to protect the city from the Ottomans, this beautiful monument reminds of a triumphal arch with its four columns and three entrances.

The Land Gate is decorated with a statue of the city’s patron saint – St. Chrysogone, as well as a winged lion that symbolizes Venice. 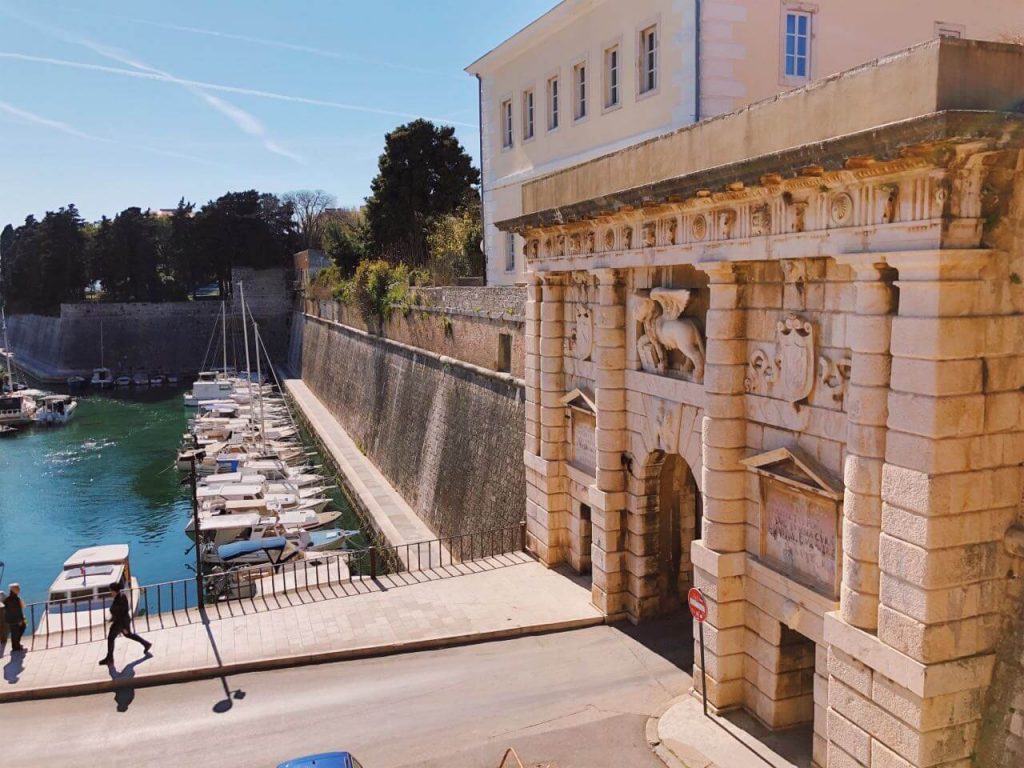 The Land Gate seen from the Queen Jelena Madije Park 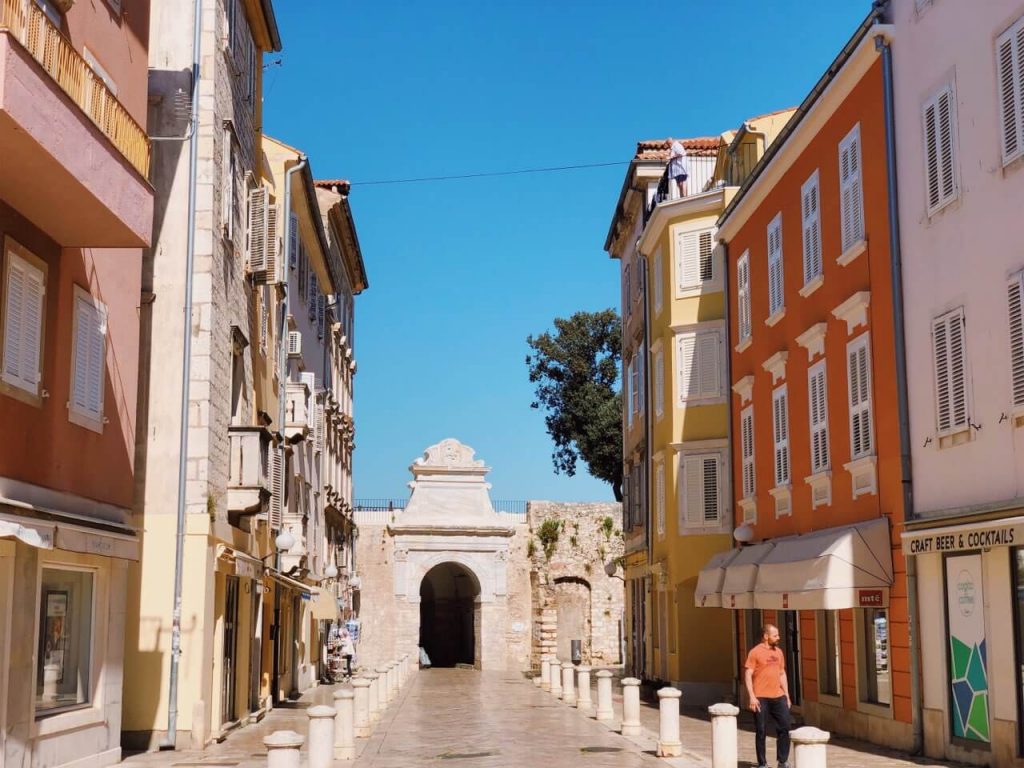 The Sea Gate, also known as St. Chrysogonus’ Gate, because of the church with the same name located nearby

9. Take a walk at the seaside and check out the University of Zadar

Take a walk along the seaside heading to the Sea Organ to enjoy this part of the city, which is ideal for lazy walks. 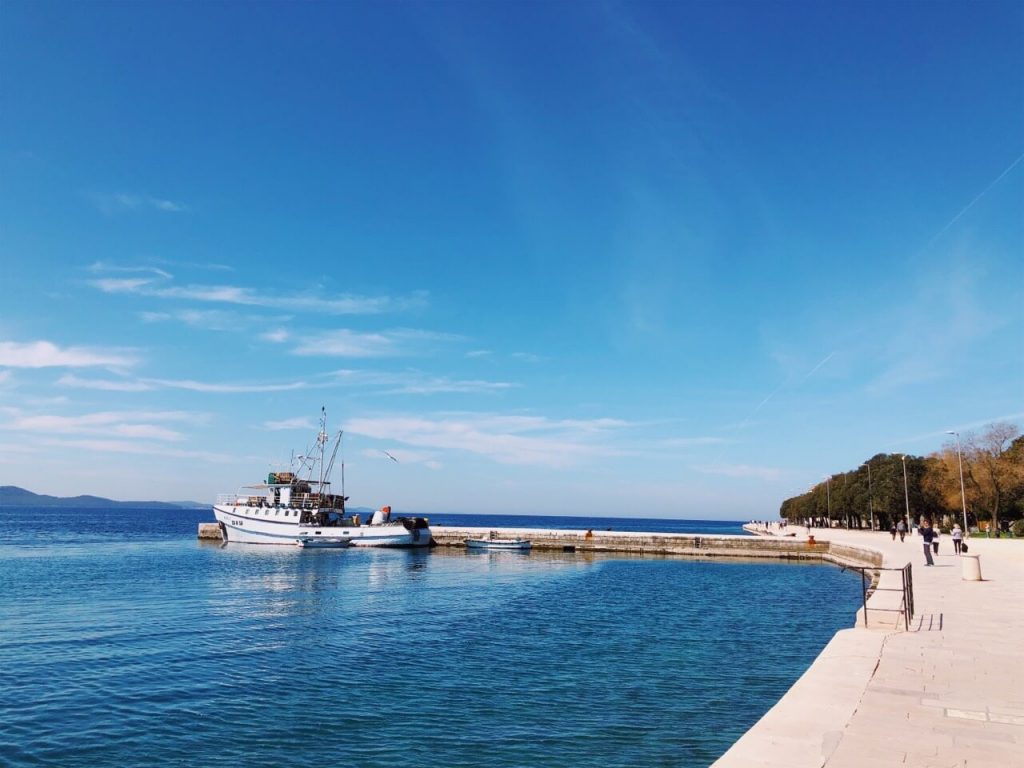 A lovely place to take a walk

Your walk should start at the University of Zadar, which is next to the Five Wells square. This is the oldest university in Croatia and one of the oldest in Europe. Founded in 1396, it is an institution popular with the locals and a place where many young Croatian people want to study. 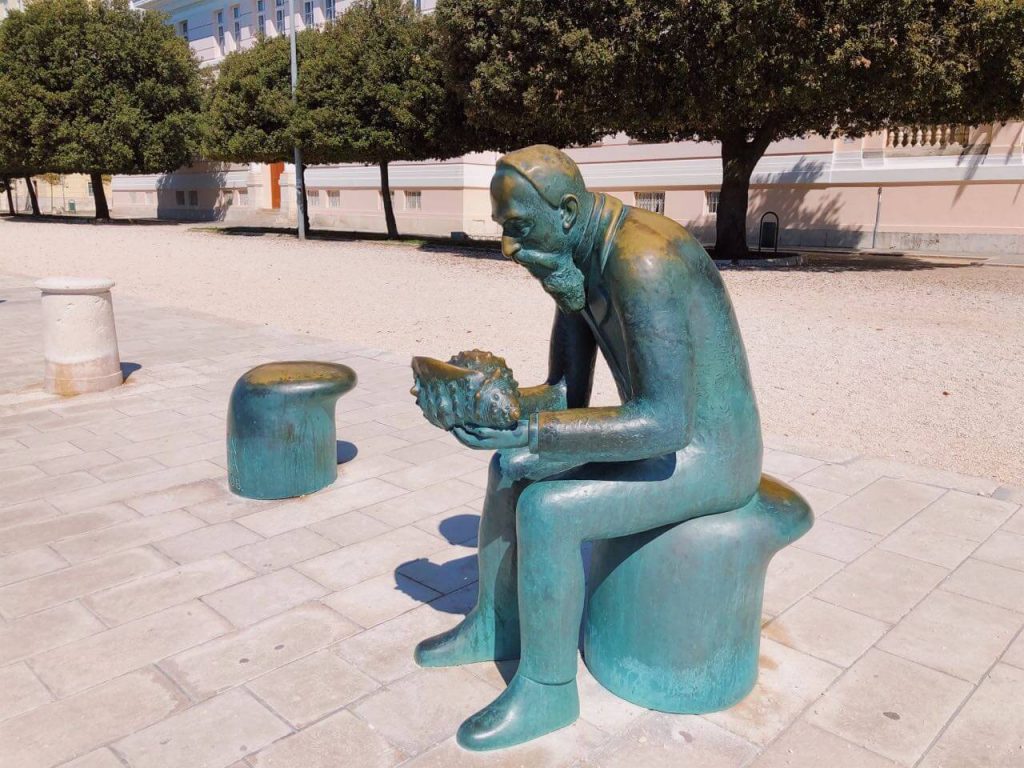 The statue of Špiro Brusina, a Croatian explorer and scientist, is in front of the university

The first time I saw the University of Zadar, I thought it would be a great idea to apply for another master’s degree here! Yep, I liked the place so much. There is no museum there, but it is just a cool place to see from outside when being around. 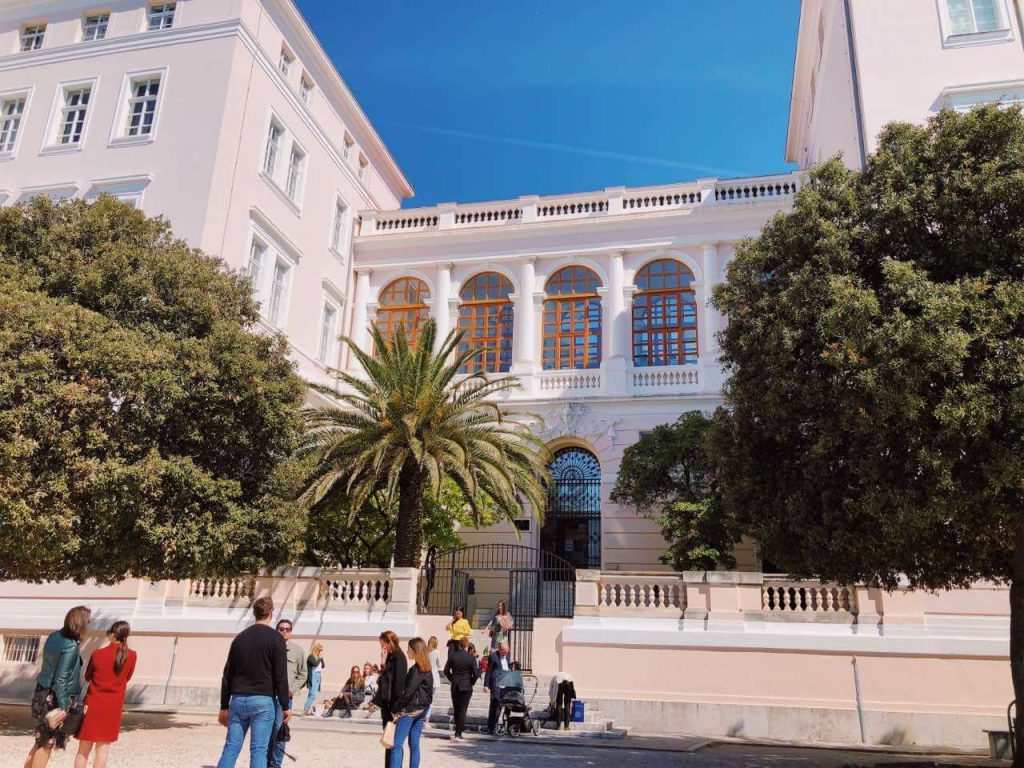 Love the palm at the entrance!

10. Listen to the Sea organ

Zadar has two unique monuments, located and connected to each other. The sea organ makes similar to whale sounds when the waves reach the tubes installed underwater at the coast. Naturally, the sea organ is more vocal when the sea is stormier.

Listening to the music of the sea is pretty nice. Locals and tourists equally love to hang around and sit in the area, enjoying the atmosphere and the sunsets, while listening to the one-of-a-kind sea music. 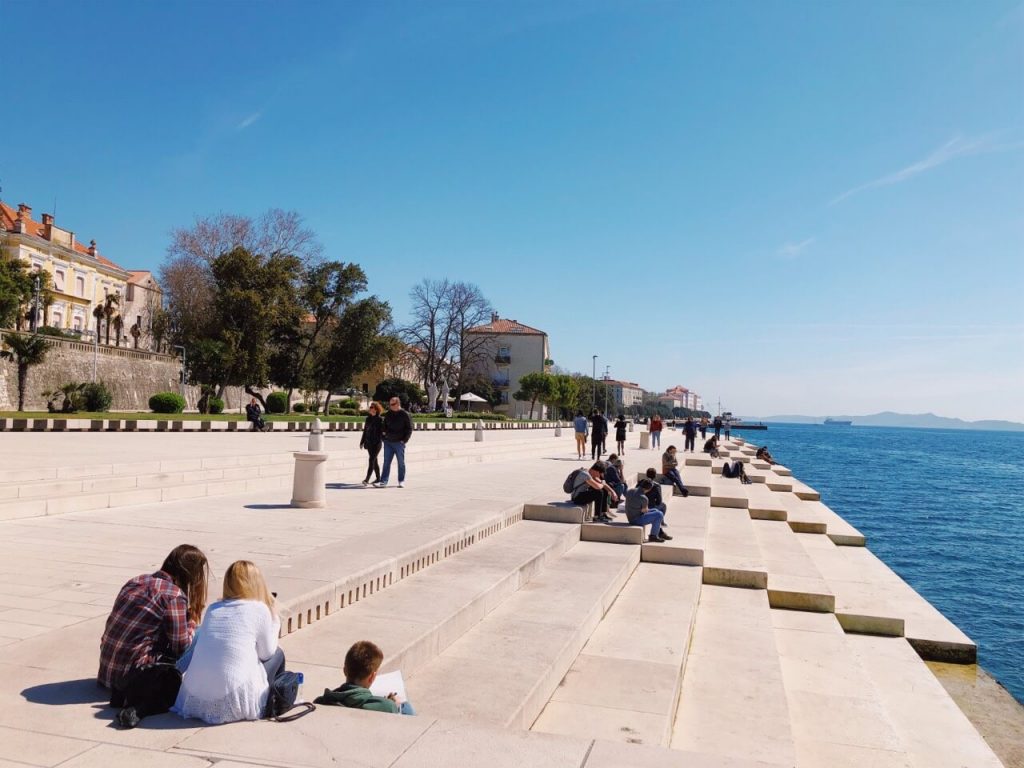 11. Enjoy a sunset at the Monument to the Sun

The Monument to the Sun is a 22 meters long disc that collects the sun’s rays and creates a very cool light show at dark. The idea is to have these lights in tune with the sounds coming from the sea organ.

This one of a kind solar-powered monument celebrates the sun and the unforgettable sunsets that you’ll see in Zadar. Alfred Hitchcock said that Zadar’s sunsets are more beautiful than those in California. And yes, sunset time is probably the best time to be around.

The Monument to the Sun at daylight

Moreover, one couldn’t help but feel like Michael Jackson walking on a shiny dance floor! 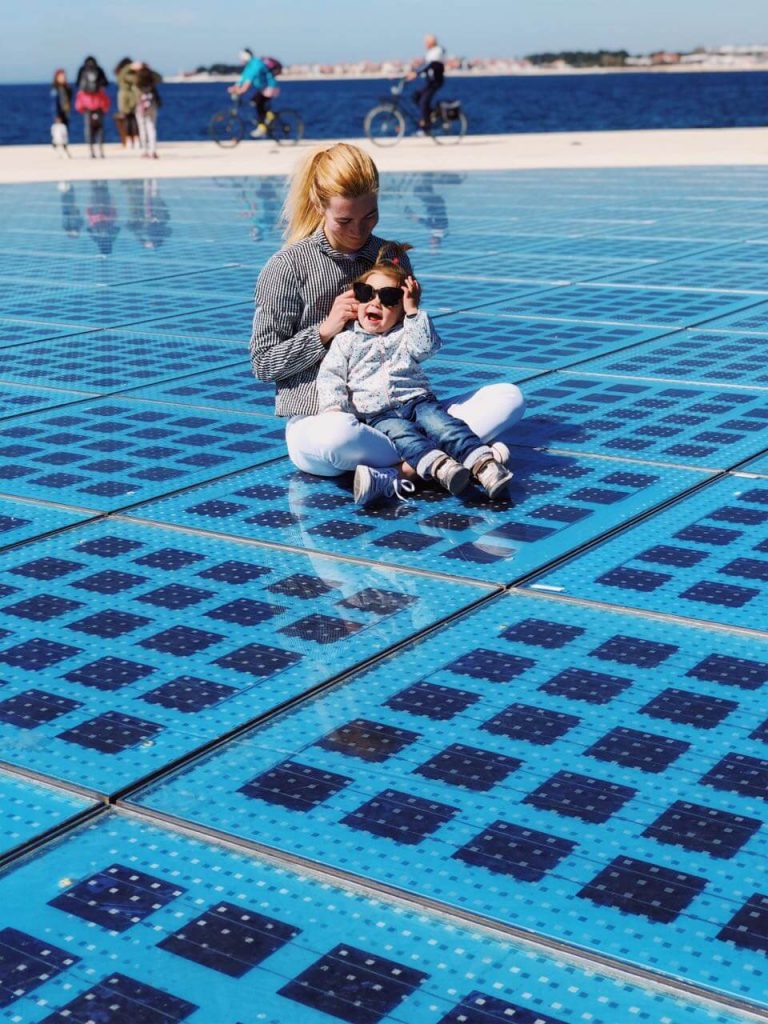 Anna and I playing around.

Finally, I have to admit that Zadar and the region offer much more! Consider spending at least a week around to get to know and enjoy the place! Also, read all the details about my recent trip to Zadar!