Rovinj between Croatia and Italy

Rovinj is a small coastal city on the north Adriatic Sea in Istria, Croatia. The population is about 15,000 inhabitants, plus lots of tourists in the summer. Rovinj is its Croatian name and Rovigno is its Italian name – both are correct as both languages are official languages of the city.

Rovinj has been part of Yugoslavia and then Croatia only after World War II. Before that Rovinj was an Italian city between 1918 and 1947, an Austrian city between 1797 and 1918, and Italian again dating back to 13th century.

Being so close to Italy and a really important city governed by the Republic of Venice for centuries, its Italian heritage is an integral part of the city. Visitors may wonder whether they are in Croatia or Italy as the landscape reminds of Italy.

What to do in Rovinj

You should do only one thing in Rovinj and that is enjoy it! Experience the city walking on the streets, wandering around the harbor, eating the amazing food, choosing ice-cream and swimming on the rocky beaches.

Rovinj is a gorgeous Mediterranean city with a charming old town area that is quite big. You’ll notice the Mediterranean architecture and style everywhere. The buildings are old and well preserved. They are also very colorful and ideal for photos (to the Instagrammers out there).

On the top of the old town you’ll see the cathedral of Saint Euphemia. Climbing up is not hard even with a baby stroller and the walk is just beautiful! You go up along the sea and enjoy the view. When getting into the church I thought: Wow, this is perfect for a wedding!

The beautiful cathedral of Saint Euphemia in Rovinj

There is a café-bar at the top, right below the cathedral. You can climb to Saint Euphemia from one side and then get back to the city from the other. This way you’ll see more of the charming narrow streets of Rovinj.

Besides walking in the city, you can visit the nearest island called Sveta Katarina (Saint Catherine). There are rent-a-boats, taxi boats and excursions to the island. Due to our busy schedule in Rovinj, attending the Weekend Media Festival, we were not able to check it out. Still, I am sure it is a nice place to visit and get on a boat for a while. Should be a lot of fun if you’re traveling with kids.

Where to stay in Rovinj

There are all kind of accommodation options in Rovinj. You can book a room or an apartment in the old town or close nearby. Also, several big hotel resorts are located just outside the city.

I would definitely recommend staying and sleeping in the old town because it is the most interesting and charming part of Rovinj. There aren’t that many hotels in that area, or at least I haven’t noticed a lot. Still, all booking sites offer plenty of apartments and accommodation for every budget. 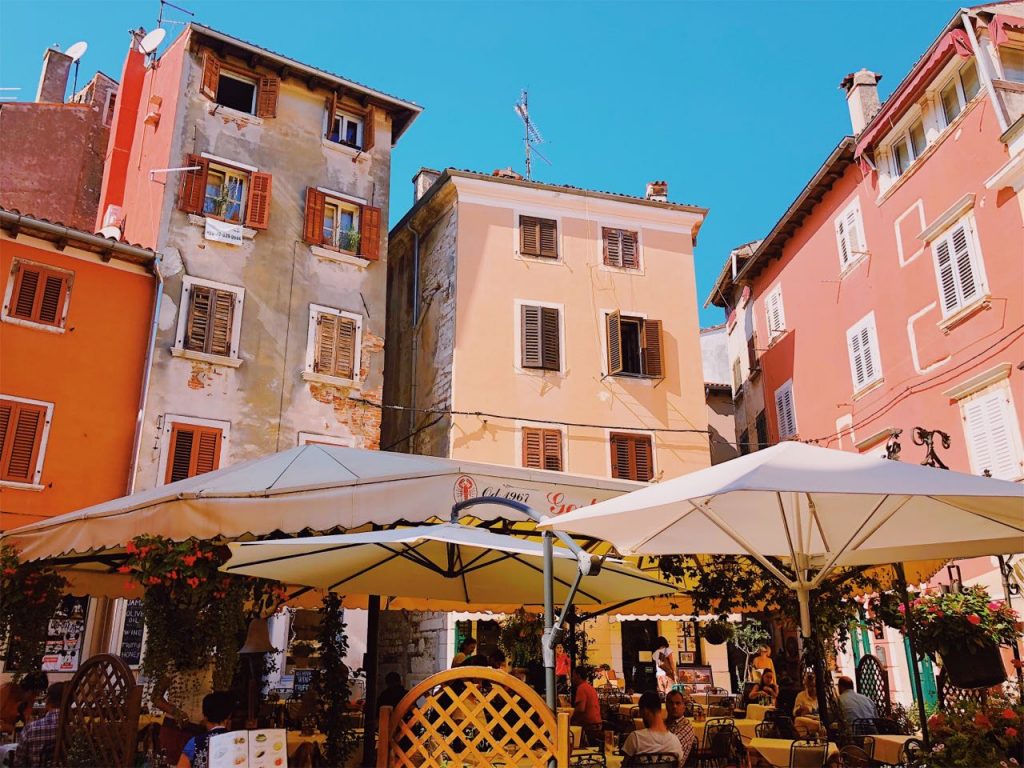 Restaurants in the old town of Rovinj. Many houses like these on the pic offer accommodation

Traveling with a baby and a grandma this time, we booked a two-bedroom apartment in the old town. However, when we got there it turned out that due to some misunderstanding at the agency our apartment is not ready. They brought us to another apartment in the same area, which wasn’t ready either. Naturally, this was not ok and they needed some time to fix it.

We were vocal about the whole thing, especially because it was passed baby Anna’s bedtime at this point. At the end they said they would not charge us at all due to the inconvenience. This was a fine consolation, but Anna got excited from the whole experience. She was not able to fall asleep until three hours after her bed time. But well, these things happen on the road. 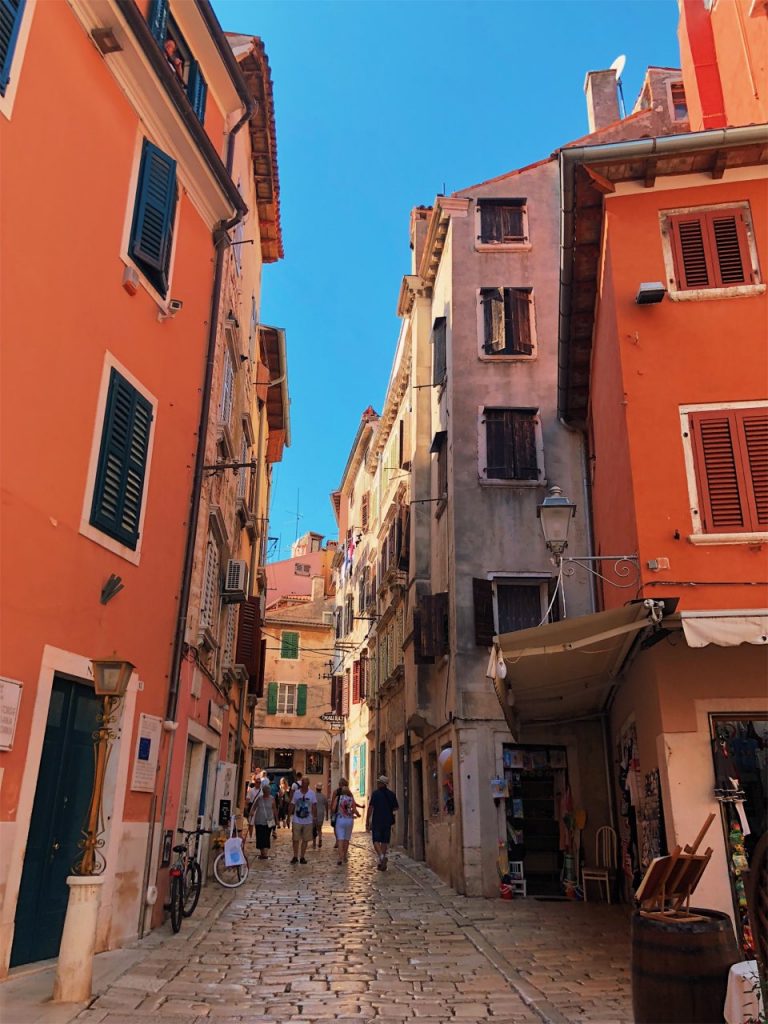 Typical street in the old town of Rovinj

Parking in the city center is really difficult. There aren’t any free options. Maybe there are in the more remote parts of Rovinj. We were looking for a spot to leave our car for 30 minutes when we decided to split. Then my husband was left alone on the mission to find a parking place. He needed another 20 minutes to find a place, which was 15 minutes away on foot from our apartment.

The prices are not that scary and there are daily cards that one can purchase. One day costs HRK 80 or around EUR 10 as of September, 2018.

Parking in Rovinj can be difficult for both cars and boats

Rovinj is really close to Italy and Slovenia, so you can add it to your vacation if you’re staying nearby. It’s good to know that Venice is just two hours away on a ferry, which sounds great to me. Also, there are ferries going both ways every day. Taking the ferry, enjoying the wide blue sea, then get off to walk on the streets of either Venice or Rovinj… What more could one ask for, right?

Another really cool city nearby is Pula. Located just 30 kilometers or 18.6 miles away, the nearest airport to Rovinj is in Pula. I had never been to Pula before, so we decided to spend a day there, before we start our adventure in Rovinj. Check out my blog post about Pula for more details.

If you have more time and would love to explore, the beautiful cities of Opatija and Rijeka are also close enough. Both are located just 100 kilometers or 62 miles away. Moreover, there is an airport in Rijeka as well.

A fountain at Rovinj’s city center

When to visit Rovinj

Rovinj is a popular tourist destination throughout the summer. July and August are the most preferred months to visit. If you want to avoid the big crowds and have nice weather as well, you can come in June or September.

September is my personal favorite for vacations in Croatia in general. Most of the time the weather is fantastic! July and August can be too hot, while September offers the opportunity to stay on the beach the whole day.

Visiting Rovinj at the end of September was a great treat for my family. The temperature was around 30° Celsius or 86° Fahrenheit. I was surprised to see that many tourists actually, so the high season must be really busy.

Rovinj at sunset in September, 2018

I already mentioned that parking is the city center is hard, so keep that in mind.

Staying in the old town is very romantic, but not the most child-friendly option. Keep in mind a few things, which are valid for all similar areas in Croatia and across the Mediterranean region:

No elevators in the buildings.

No parking options nearby.

All these make it difficult traveling with babies and small children. It is best if you can communicate to the place you want to book and know in advance what’s the situation. 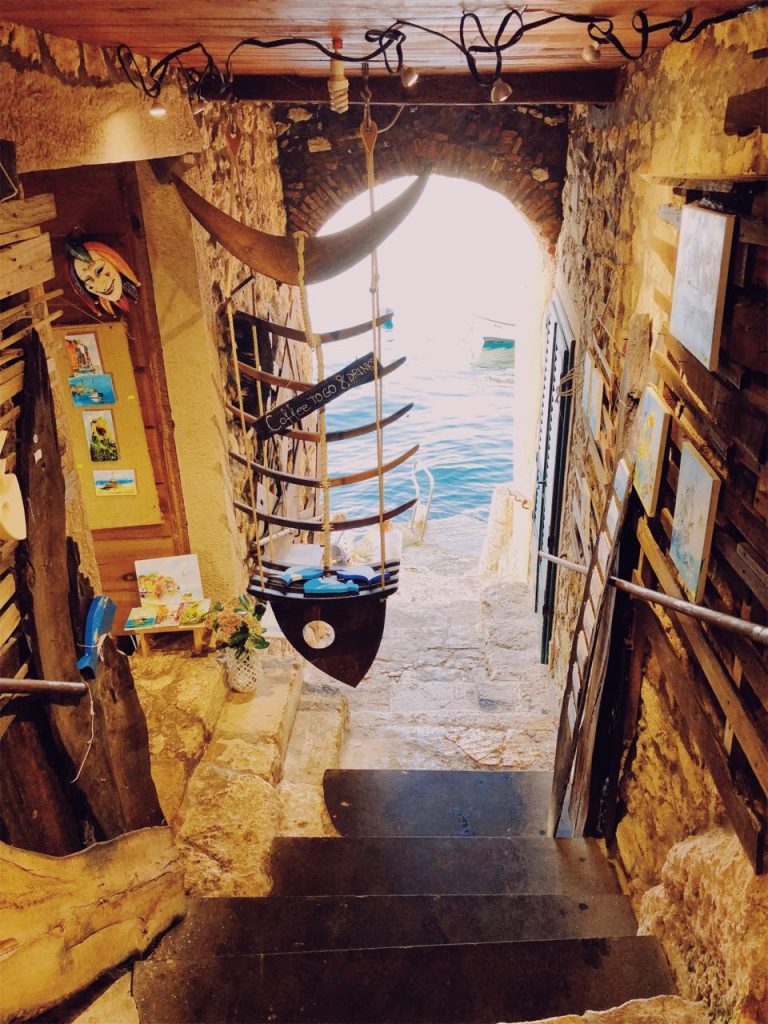 A lovely image from the old town of Rovinj

It’s up to you to decide if staying in the city center is worth the effort. My family decided it is the best option for us as we didn’t want to get in the car every day. Most probably you are all used to handling the baby stroller and all the baby equipment, as we are, and you won’t mind it. After all, it is a big plus to be at the heart of the city right away.

The beaches in Rovinj’s center are rocky and pebble beaches. Most of them are not suitable for small children as the water gets very deep from the start. If you want to spend more time on the beach, it is better to choose a location right outside Rovinj and check in advance how are the beaches around.

A beach in the center of Rovinj

Finally, I want to tell you about the event which was one of the reasons we went to Rovinj in September, 2018.

Weekend Media Festival is the largest regional communication festival, visited by thousands of experts, lecturers, panelists and all who want to know more about the future of media and digital technologies. The eleventh edition was held between the 20th and 23rd of September. The event always takes place in Rovinj.

The entrance of Weekend Media Festival in Rovinj

Having a regular job in the media and communications sector, I had my eye on the Weekend Media festival for several years now. I wanted to check it out, but the time was never appropriate for different reasons. Plus, Rovinj is 430 kilometers or 267 miles away from Sibenik, where we reside in Croatia, and that is a long drive.

Spending the summer of 2018 in Croatia and being there until the end of September, my husband and I (mostly I) decided it was about time we go to 🙂

One of the stages at Weekend Media Festival

We went to several lectures and workshops during the day program, but were not able to enjoy the parties at night as they started at around 11:00PM. This would not go well with our parents’ lifestyle. Talking to other participants in the event, I can tell that the parties are really good. Hope to go next time.

All of the panels we visited were well organized and interesting. I also got the chance to meet the manager of the Croatian football team, Zlatko Dalic, which was really cool. He was a participant in one of the panels which I visited. 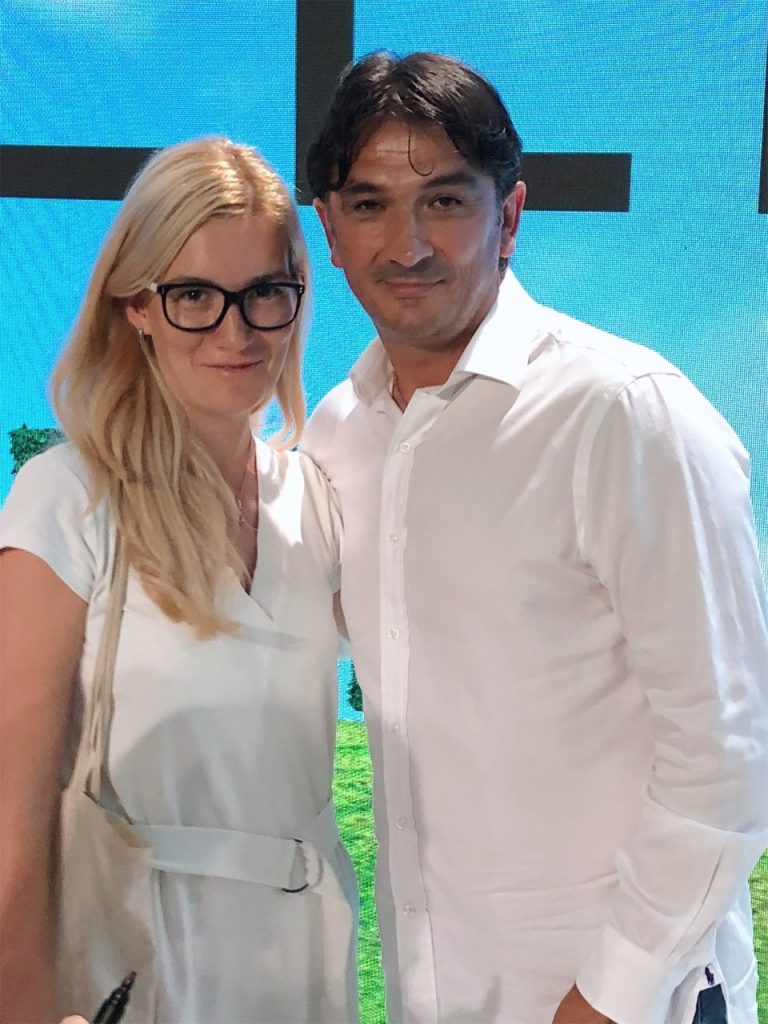 Well, this post got way longer than expected! This only shows that there is a lot to be said about Rovinj. Let me know if I missed anything or if you need additional info.