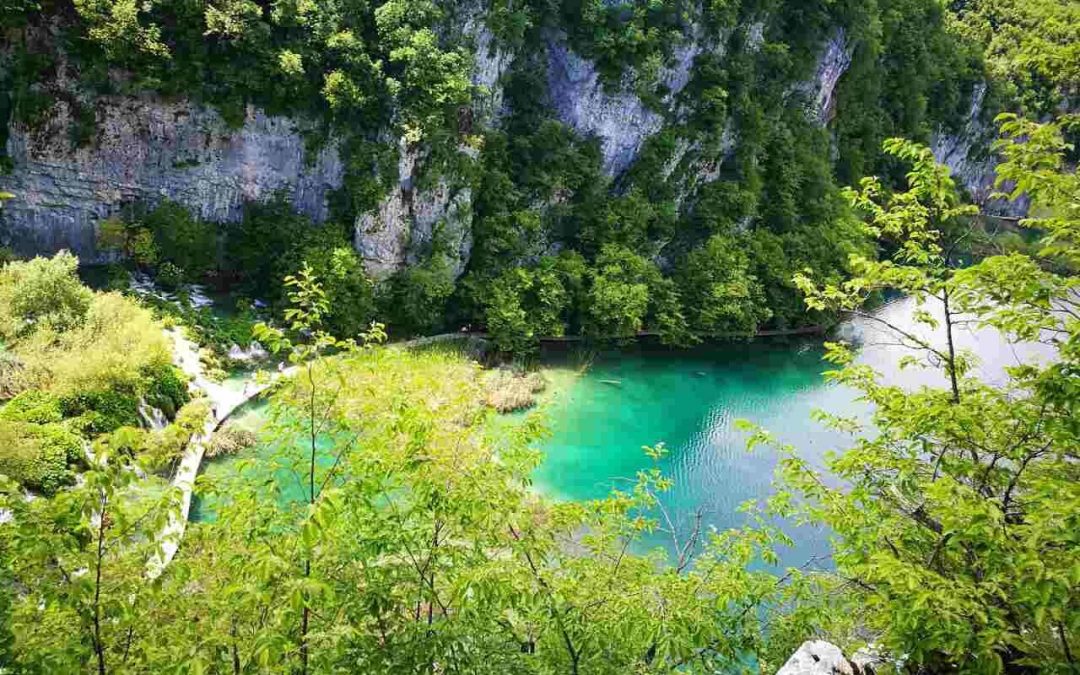 Plitvice Lakes National Park (Nacionalni park Plitvička jezera) is the largest national park in Croatia and an absolute must-see for nature lovers. It is located close to the capital Zagreb.

Plitvice Lakes was proclaimed the first national park in Croatia in 1929, which also makes it the oldest one in the country, together with the Štirovača forest in North Velebit. In 1979, it was added to the UNESCO World Heritage register. It’s a beautiful and calm, paradise-like place and I wish you all find the time to visit it.

Organization of the trip

There are seven routes to choose from when you go to the park depending on how long you’re staying and how capable you are of walking. The park’s website gives detailed info on what is included in each program and approximately how much time you need.

You can check out the options in advance, select the one that suits you best and then just follow the signs while you’re inside. There are maps sold at the entrances, but the girl that was selling them told us not to bother buying one. She said we won’t actually need it since there are signs with the routes everywhere in the park.

She was right. The signs were really helpful. They are at every point where two or more paths cross, so it is really difficult to get lost.

The biggest attraction in the park is the Great Waterfall located close to the main entrance (Entrance 1 or North entrance). All of the visitors check it out and it is included in all of the seven routes that the park offers. It is also pretty difficult to miss as lots of people are heading that direction.

Besides the big waterfall, you can enjoy a total of 16 lakes. There are 12 so-called Upper Lakes and four Lower Lakes, plus a few smaller lakes that are unnamed. 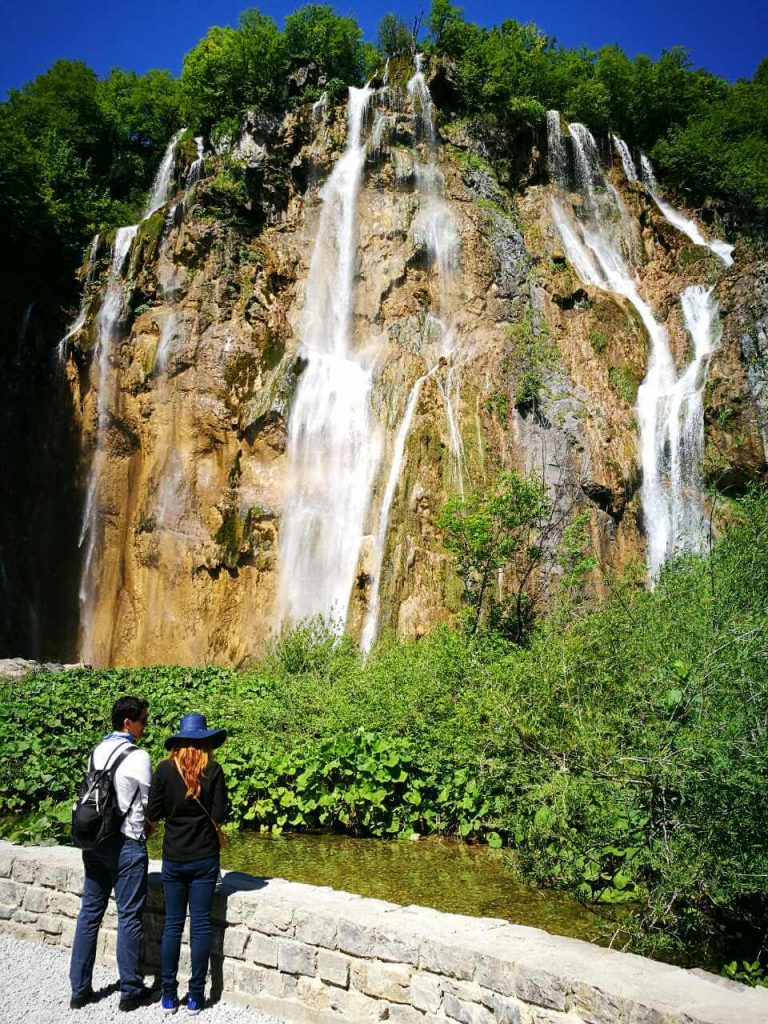 A couple at the Great Waterfall

National park Plitvice Lakes are full of views like this one

Route C and how long to stay at Plitvice Lakes

I would recommend spending a whole day at the park. My husband and I visited in May 2017 and selected route C, which includes the Great Waterfall and the Lower and Upper Lakes. The biggest part of the route is walking. Then there is a boat that you take in the middle of the route. Before getting on the boat you can check out the restaurant that is right there or have a picnic on your own.

At the end of route C you return to Entrance 1 on a bus, which surprisingly is called a “panoramic train’ on the park’s website. I was really excited to check out the so-called panoramic train, only to be left disappointed taking a ride on a regular small bus. There are some panoramic views, but no actual train. 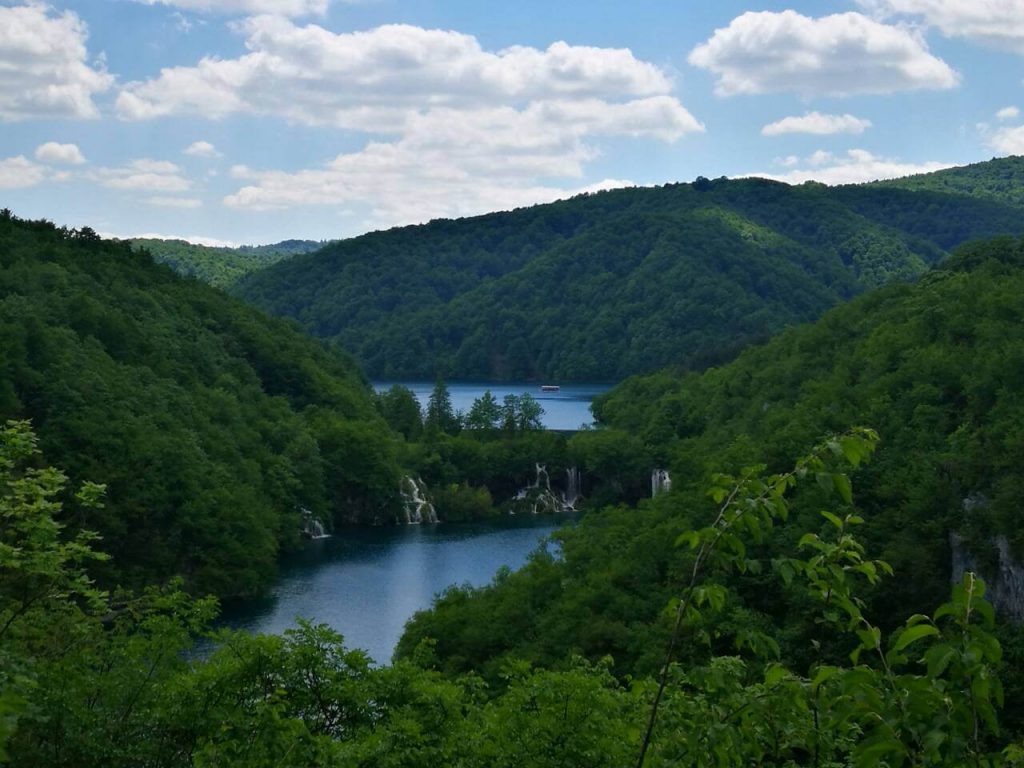 A panoramic view at Plitvice Lakes

According to the official website of the national park, Route C is eight km and takes around four-five hours. We walked a bit more than eight km and it took us between seven and eight hours. That’s because we made a few breaks since I was pregnant in the fifth month. Thus we were slower than usual. 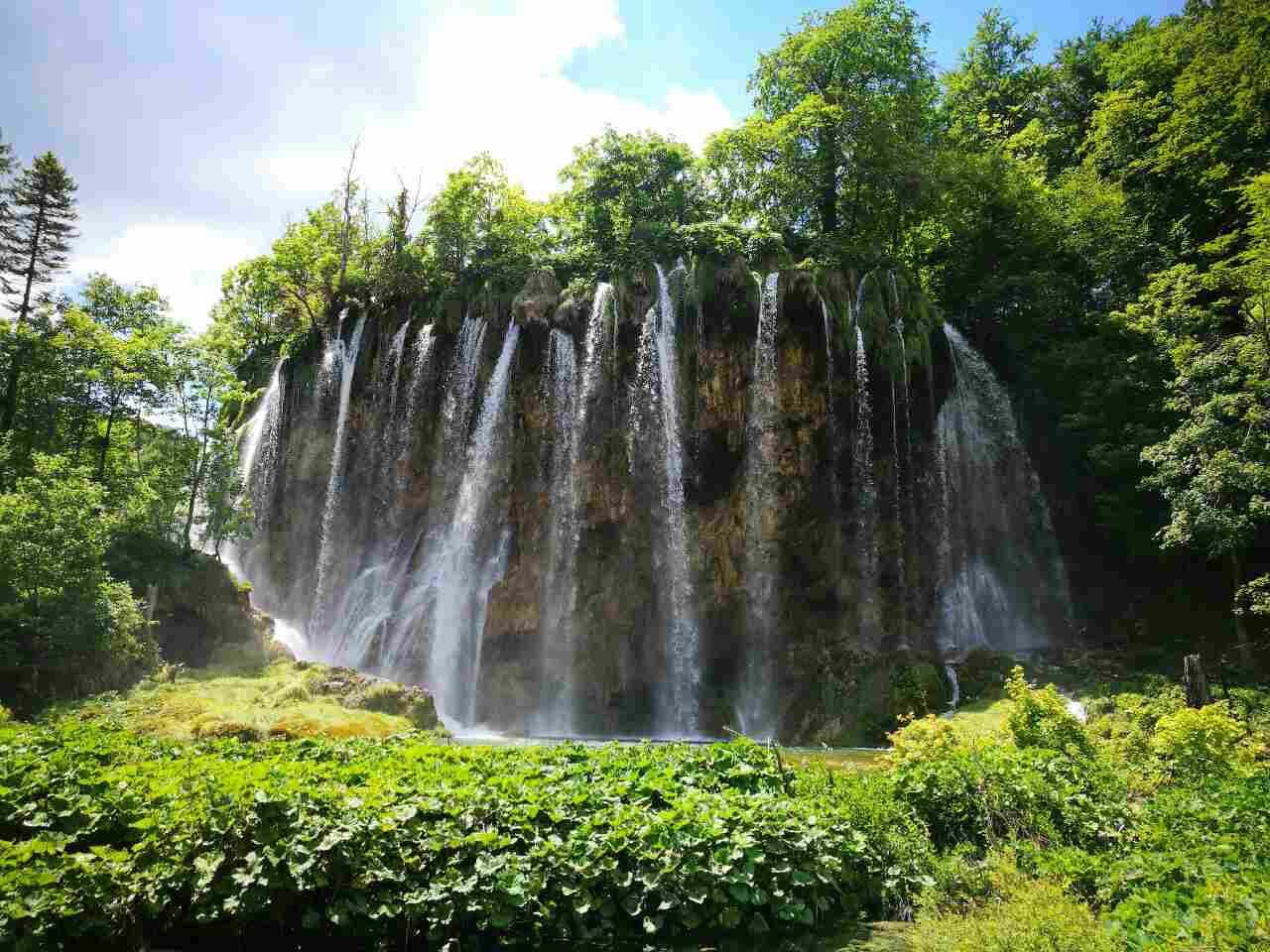 Keep in mind that the park is opened throughout the year and visited by many tourists, especially in the summer. Summer is, of course, the busiest time for tourism in the whole country. This way there are times when you’ll have to stand in a queue to see the waterfall or the next lake. Queues are not that common in the more remote areas of the park, but if you cannot stand them it is better to visit in the low season.

Even if visiting in the summer, try not to visit on Friday, Saturday or Sunday as the weekend is always busier than the regular working days. Many locals decide to have a nice day out in the nature during the weekend and visit the park then, in addition to the foreign tourists.

Another important note – many tourists come to the park by buses from Zagreb at around 10:30 / 11:00 AM. If you manage to be there earlier, you’ll miss the busy hour and have the park more or less to yourselves.

My husband and I traveled from Sofia, Bulgaria, to Plitvice Lakes by car the whole day. We slept at a hotel nearby and we went to the park first thing in the morning. Well, there were some other visitors, of course, but not massive bus groups.

The national park is full of such landscapes

How long to stay at Plitvice Lakes?

I would recommend spending a whole day at the park during the spring or early summer in order to feel the place and have enough time to enjoy it. The winter pics look amazing too, but seeing all that green nuances is magical. Many one-day excursions from Zagreb provide transportation to the park and free time, which is enough for taking one of the shortest routes.

If you are a big fan of nature and parks, spend the whole day there or even book a sleep nearby. There are tickets to the park available for more than one day. Some tourists take different routes on separate days.

There are a lot of places in the region that offer accommodation. Most of them are villas of private owners. There is no city close to the park, thus there are no restaurants and just a few supermarkets. My husband and I booked a room at a hotel that also had a restaurant. We dined after we arrived and had a nice long breakfast before we visited the park the next morning. As I said, I was pregnant and planning meals was part of my daily routine. Make sure you’ll have food provided or a place to eat nearby.

Visiting pregnant and with children

Visiting Plitvice Lakes pregnant was a really nice experience for me and I loved it! I felt great and was really glad that I am traveling and finally going to this national park. We selected a route with a bit more walking, but having the breaks kept me energetic. Plus, I am a walker.

I was tired at the end of the trip, but I would have been that way even if not pregnant. Depending on your pregnancy history and doctor advice – choose the right route for you and go for it!

Plitvice can be a lot of fun for kids. Just make sure you choose the proper program and don’t put the young ones into walking the whole day.

If you are planning a trip to Plitvice Lakes, you are most probably visiting Zagreb, right? Make sure you check all my posts about the interesting places in this lovely city!