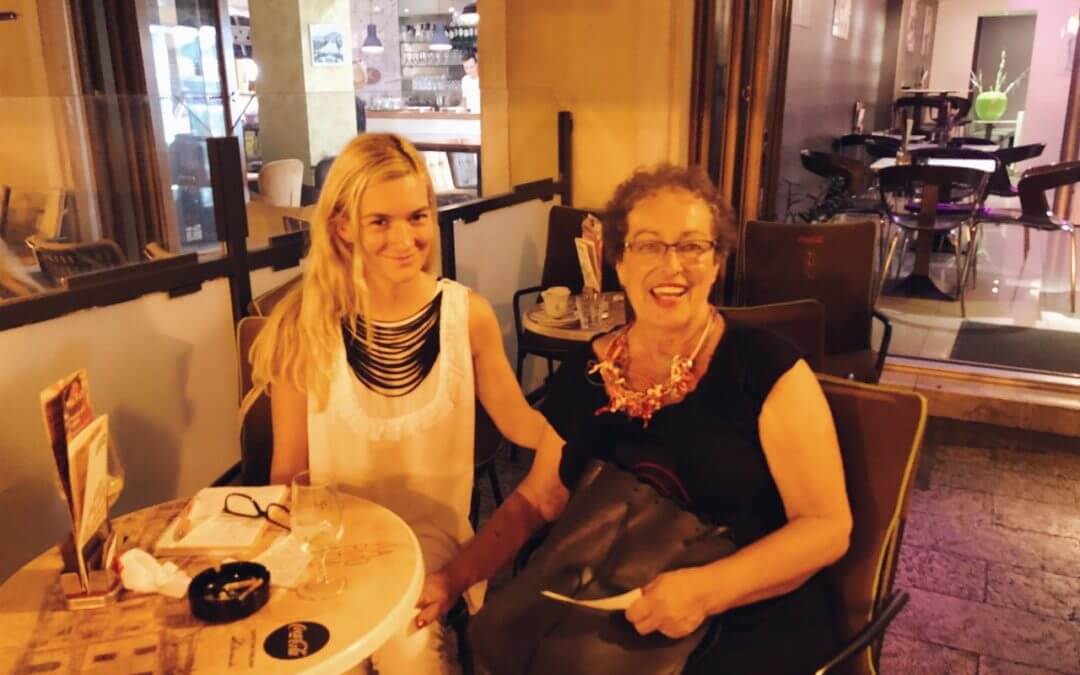 Glad to share my first ever interview on the blog! I had the pleasure of meeting Jasenka Ramljak, the former president of Sibenik’s International Children’s Festival (Međunarodni Dječji Festival) last month.

Speaking English, French, German and Italian, besides Croatian, Jasenka is a true cosmopolitan person who traveled the world and did a lot for the community as the president of one of the most prestigious festivals in Croatia. She actually managed the International Children’s Festival for the amazing 36 years! Jasenka even got the Sibenik City Award for her contribution in 2013.

Mrs. Ramljak in action as a tour guide at Sibenik cathedral St. James

Mrs. Ramljak is now a private tour guide who shows the many secrets of Sibenik to the tourists. She also took the position of president of the Association of Tourist Guides “Mihovil” Sibenik for four years after retiring from the festival. 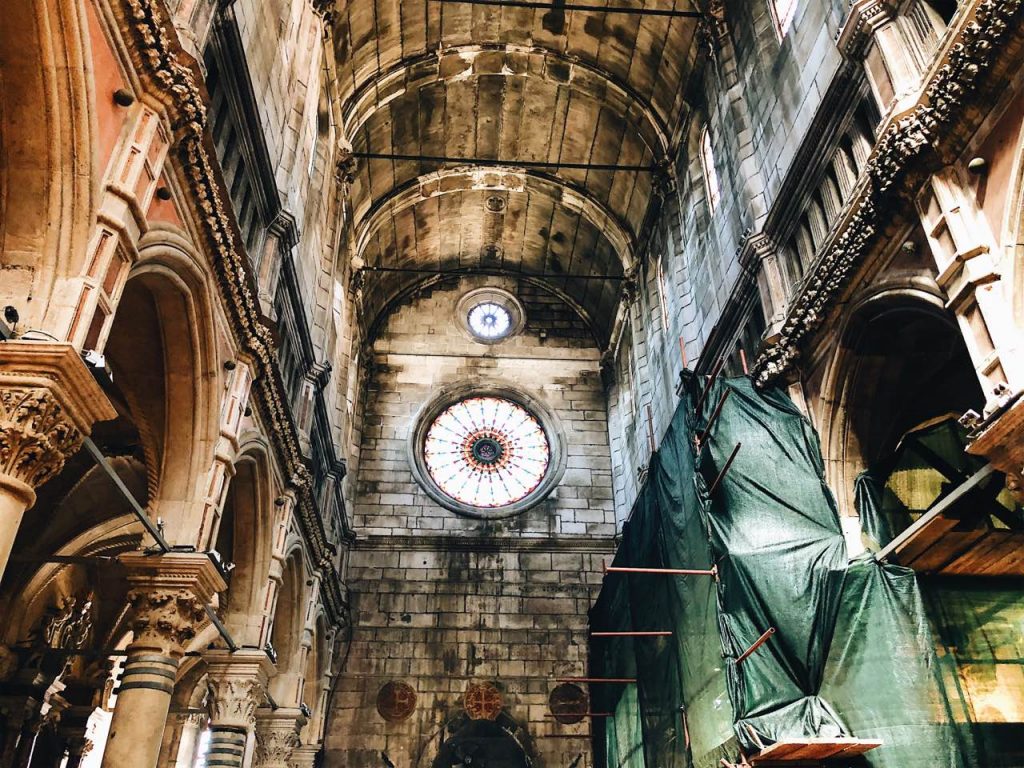 Inside St. James cathedral in Sibenik

Similar to me, Jasenka married a man from Sibenik and lives here since 1975. She shared her story and experiences with me on a lovely summer evening in Sibenik back in September. I had the chance of putting down the interview just now. Enjoy!

I did a research on you, Jasenka, and found out you actually lived in Ethiopia as a young adult. What brought you there?

Yes, that’s true. My father worked in Addis Ababa for the Ethiopian government, so the whole family went there. We stayed for 4 years. I studied in the French Lyceum and this is where I learned the language. After that we got back to Zagreb, where I continued studying French, plus English. I am originally from Zagreb, but came to Sibenik as I married here. I also have some Sibenik roots, because I had grandparents from Sibenik. So I visited the town now and then. 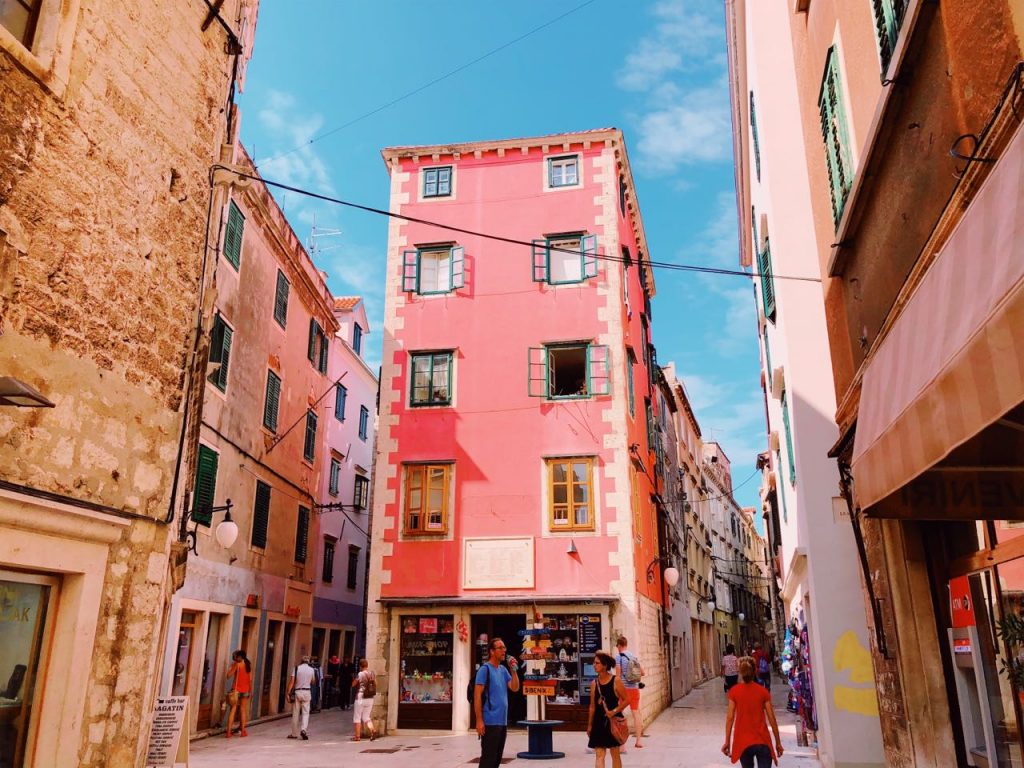 At the city center of Sibenik, where Jasenka moved in 1975

So this is how you learned French and English. What about Italian? I am aware that you speak Italian as well.

I do. Well, there are a lot of Italians in Addis Ababa. Let me tell you, the best way to learn a language is to have a foreigner boyfriend. I used to date this Italian guy and this is how I know the language.

Everyone in Sibenik knows you as the President of the International Children’s Festival. Tell me about your journey with the festival.

This year was the 58th edition of the festival. It takes place in June and lasts for two weeks. The festival looks a bit different today. We were allowed to use more public spaces back in the day. There were street performances and more stages, including on Medulic Square, which we don’t use nowadays as they are full of cafeterias and restaurants.

The festival is a space with great energy! There is the main stage right next to the Cathedral of St. James in the city center. There are also shows in the Sibenik Theater every day of the festival.

I traveled a lot thanks to my job as a director of the festival. We, participants, visited each other’s festivals and events. 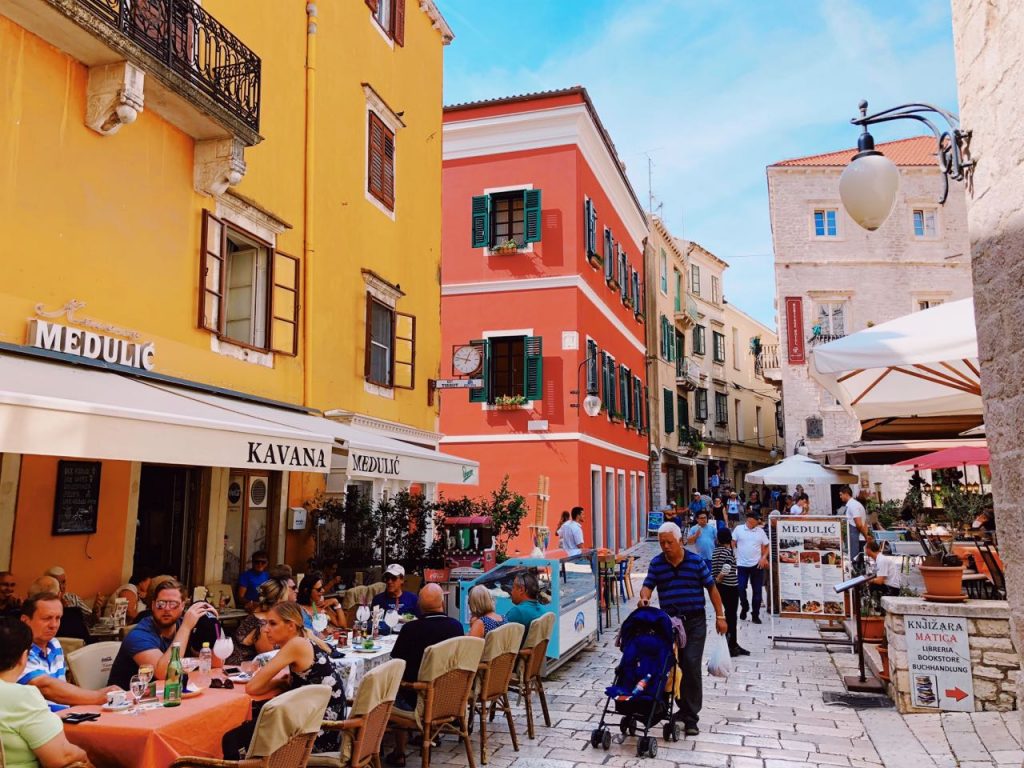 The famous Medulic Square in the old town of Sibenik

You also received the Sibenik City Award in 2013 for your contribution to the festival.

Yes, six years after I stopped working on the festival I got the award. I almost received it posthumously! (laughing)

But I am happy that I was honored with the award. I think that all good things rely on the enthusiasm of people. Passion is the key. If you don’t have passion for your work, just forget it! In the past I had passion for the festival, now I have it as a tour guide. I like to be a guide, I just love it! I do it for free for many people.

How long have you been a tour guide?

Well, I took the exams long time ago, but started having private tour guides after I stopped working for the International Children’s Festival. I have a very simple approach to life that I also have in my work.

Actually, I laugh throughout my life and it’s been easier for me. I always tell tourists: “You have to laugh at me or with me, whatever”. Why? Because I was born on the 10th of Jan, the International Day of laughter. It wasn’t proclaimed by me, but by the United Nations. It’s very official. 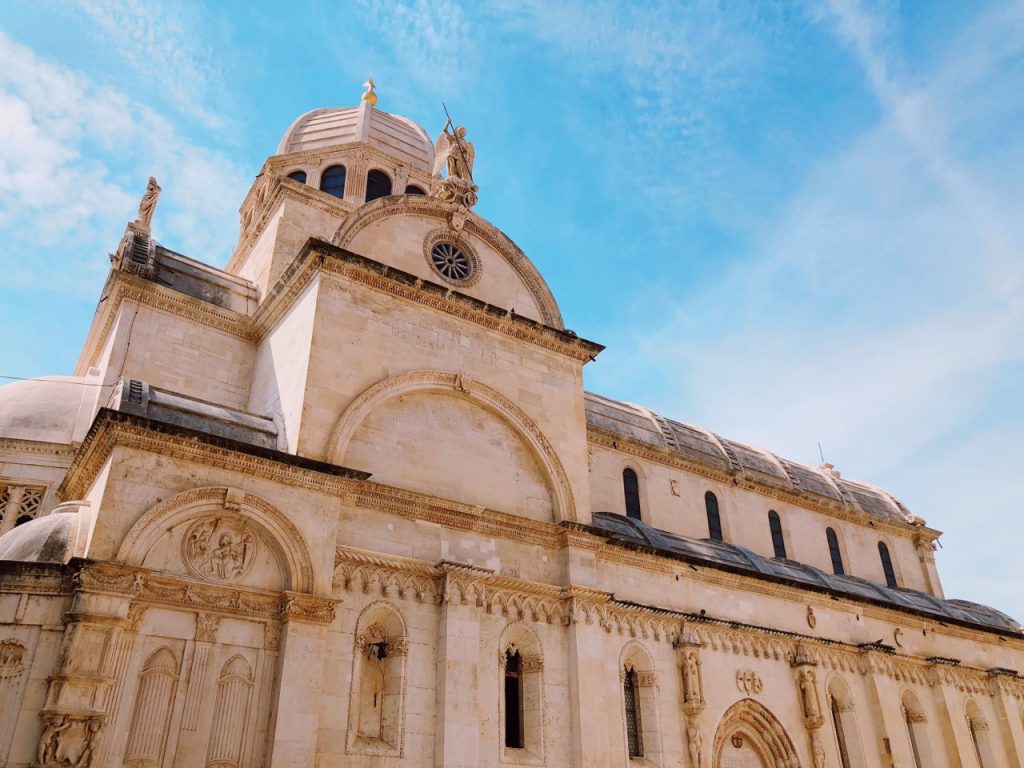 Sibenik’s St. James cathedral which is on the UNESCO World Heritage List since 2000

Great philosophy! Let’s talk about Sibenik a bit. What do tourists like the most in Sibenik?

The cathedral and the baptistery at the cathedral. When people see it for the first time, they usually go Wow! I call Sibenik the city of secrets. Every little corner has its secret and story. 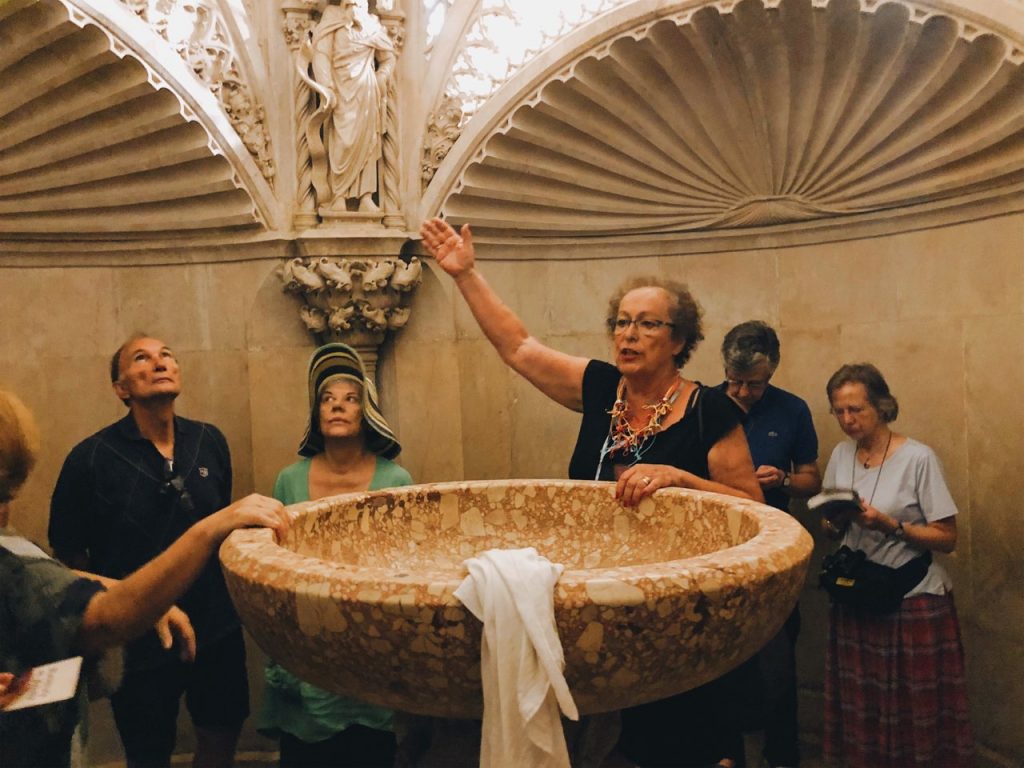 Jasenka with tourists at the baptistery of St. James cathedral in Sibenik 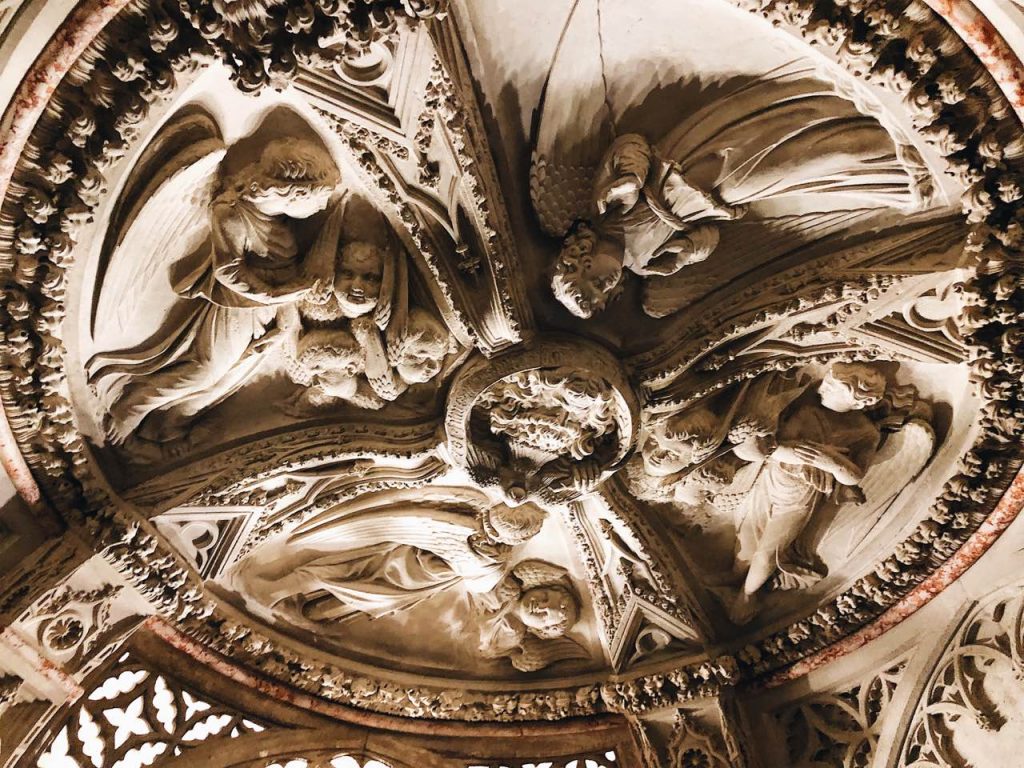 Detail from the baptistery at St. James cathedral in Sibenik

Would you share an interesting fact about the cathedral?

Of course! The two lions at the side entrance are actually a lion and a lioness. The sculptor has never seen a real lion or a proper picture of one, so he was not aware that the lionesses don’t actually have manes. Both of the animals have manes, but you can tell them apart by looking at their private parts. Also, the manes are depicted as similar to human’s long hair rather than real lion’s mane. 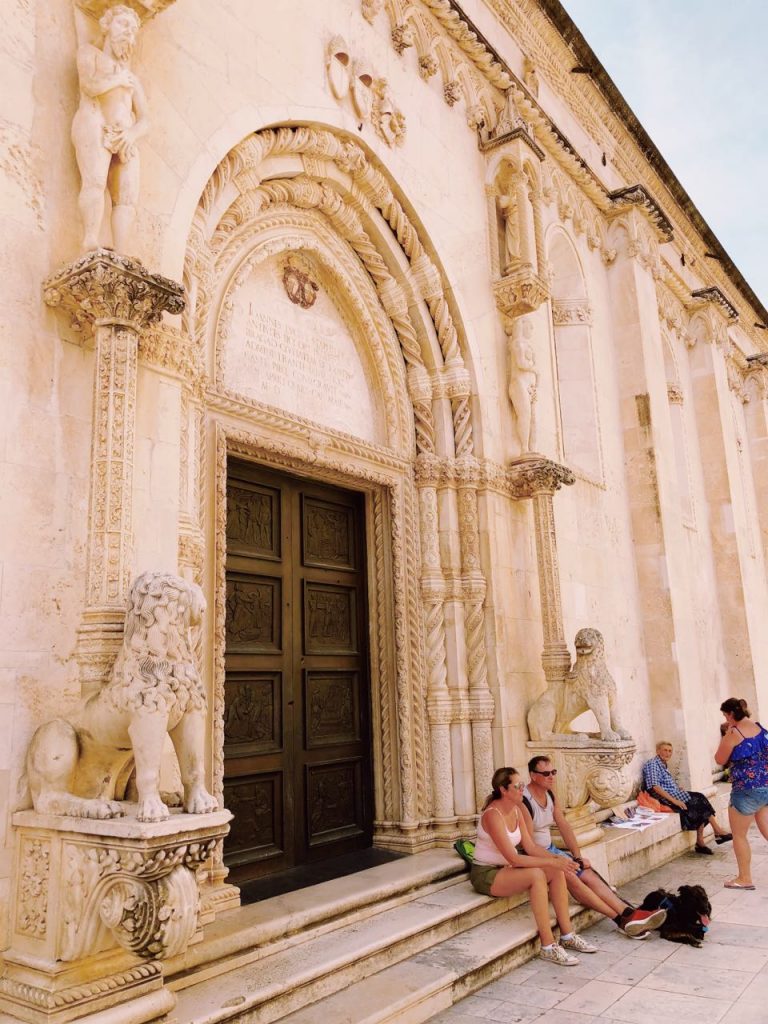 The two lions at the side entrance of St. James cathedral in Sibenik

That was interesting! Thanks for sharing! Another interesting thing I found on the internet about you was that you didn’t want to show Sibenik to Brad Pitt, who came here last summer, as you didn’t agree with some investments he wanted to do in the city. Is that true?

No, that’s not true. In my opinion Brad Pitt is a really handsome guy! I would show him the city for free! But I wasn’t asked to… Still, I made tours with some pretty famous people including Qatar’s sheikh Hamad bin Khalifa Al Thani.

Thanks for sharing all that with me! 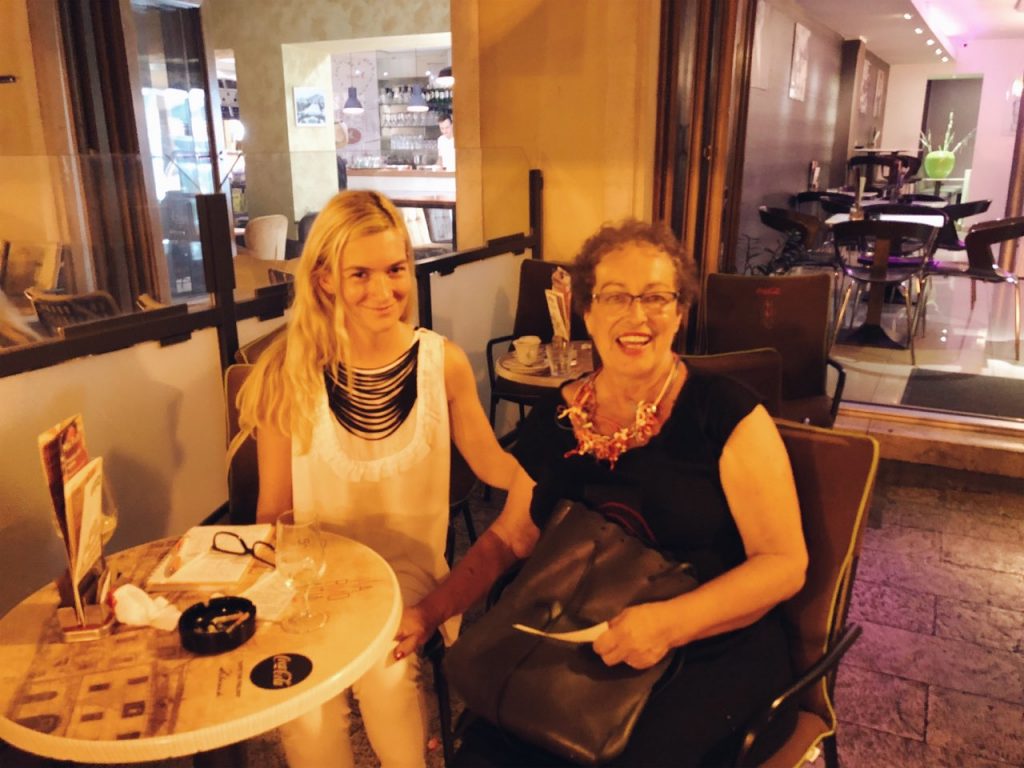 You can find Jasenka among the members of the tour guides in Sibenik and in the list of private guides in Croatia.