Is the Valley of the Temples in Agrigento worth the hype? 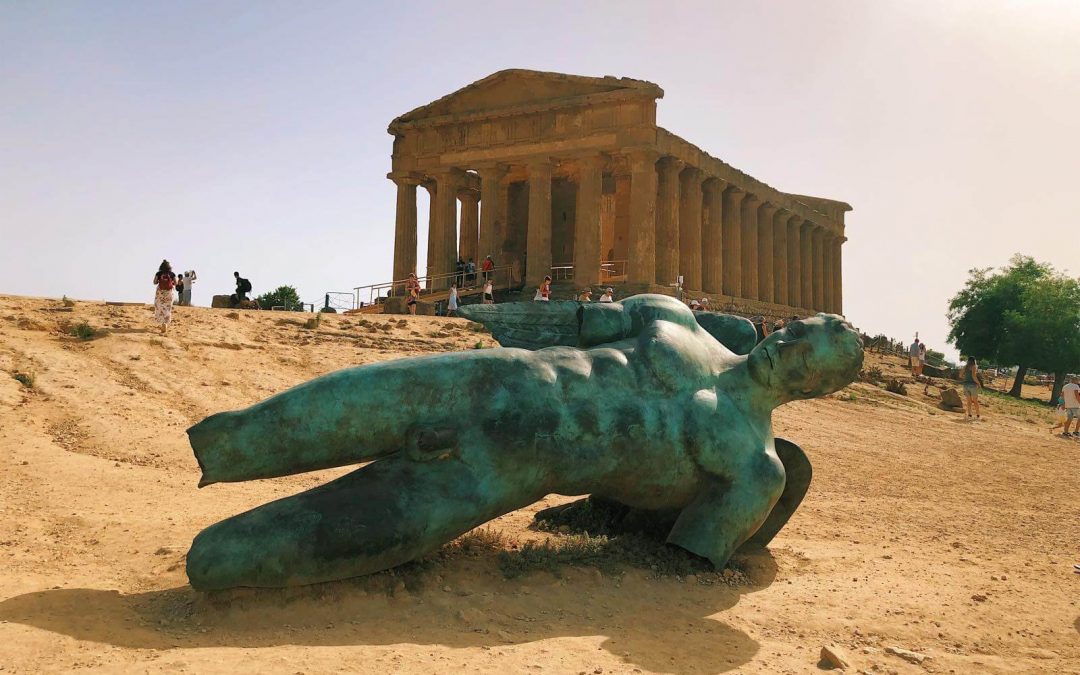 Anyone who has seen images of the Valley of the Temples in Agrigento, Sicily, will agree that the place looks really exciting. But is it though? Let’s find out!

Researching Sicily and the top attractions on the island, one will inevitably find out about Agrigento and the Valley of the Temples. A valley full of Greek heritage, listed on UNESCO World Heritage Site since 1997, the Valley of Temples looks stunning on all pictures. UNESCO even used the Temple of Concordia for their logo!

So, you don’t have to be Indiana Jones to understand how amazing it is to see Greek temples dating from 5/6 century BC in nowadays Italy!

Agrigento was founded by the Greeks in the 6th century B.C. It was one of the greatest cities in the ancient Mediterranean world and visitors can still see its proud temples standing to this very day. 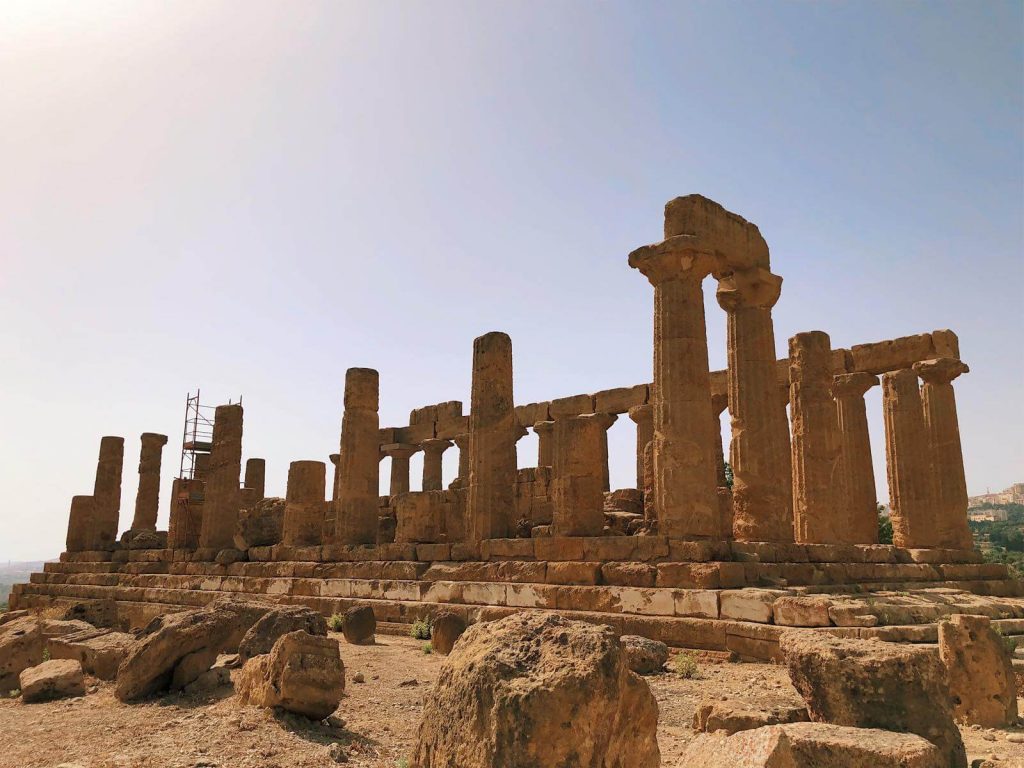 What led us to the Valley

We visited Sicily spontaneously after spending a couple of days in Matera abandoning our Amalfi plans.

We planned our Sicilian trip on the spot spending a night in Messina and 4 nights in Palermo before leaving for Bari and taking the ferry to Dubrovnik.

So we did some research on the way and all blogs and websites recommended Agrigento and the famous Valley of the Temples. We were still in a Greek mood after spending some time in Corfu right before Italy. We had to go and check out this ancient place! 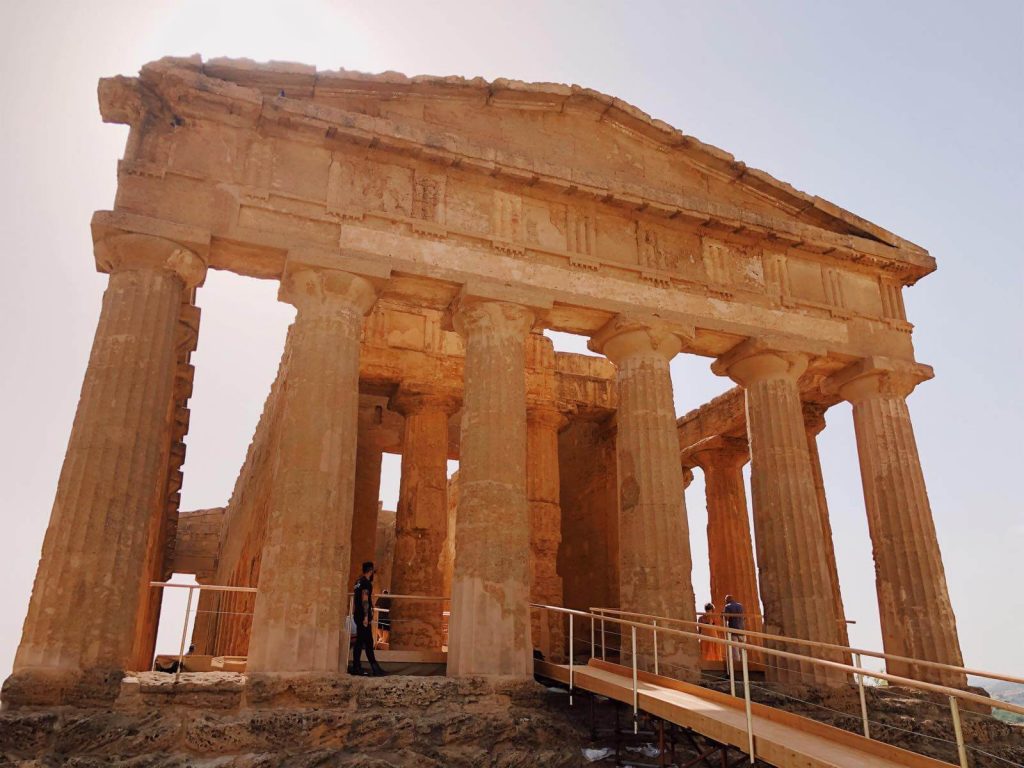 How to get to Agrigento and the temples

Getting from Palermo to Agrigento by car took is 2 and a half hours, or some 5 hours both ways. There is no fast highway, but a simple two-lane road.

Going by bus will take you a bit more than 3 hours one way, while a train trip lasts more than 6 hours one way! Still, you’ll need to travel a bit more from Agrigento to the ancient valley because it is outside the city situated on a hill overlooking at today’s Agrigento.

Catania, the other big city in Sicily, is a bit closer, but the trip to Agrigento still lasts about 2 hours by car, 3 hours by bus, and 4+ hours by train one way. Half of the driving is on a highway, so it is a faster option than coming from Palermo.

The closest airports are, once again, in Palermo and Catania. 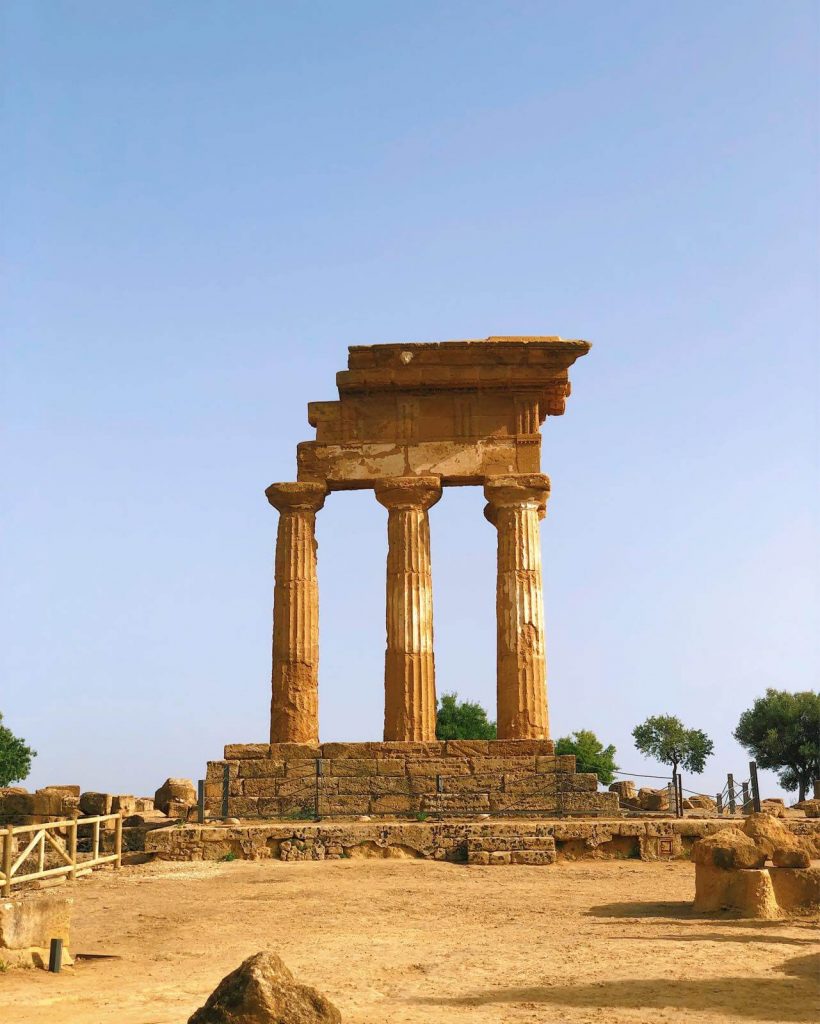 I would say this is Greece if I didn’t know the place!

Parking at the valley

First, we had to drive around to find where to park our vehicle. There is one parking lot at each of the two entrances. Most tourists (including us) explore the temples from the highest to the lowest point, which makes it the easiest to walk. 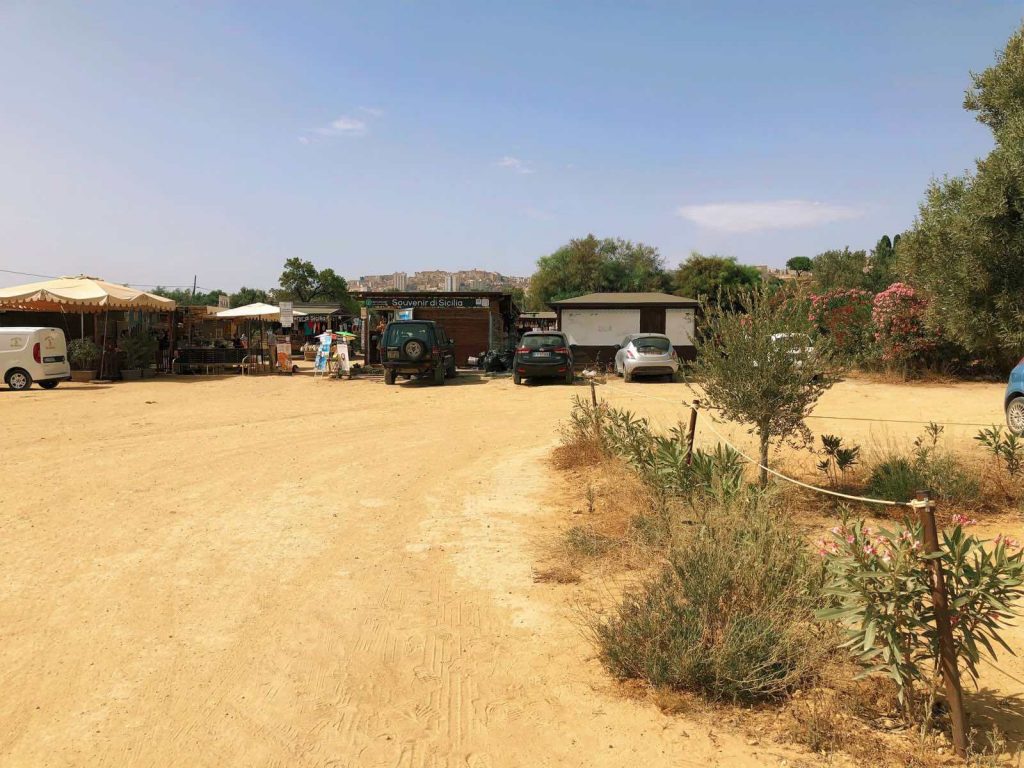 The parking serving the Valley is on a dirt area. There were enough free spots in the afternoon.

The more convenient parking out of the two available, is 2/3 kilometers away from the lowest entrance/exit. Walking from there to any of the entrances is not acceptable (especially in the summer and traveling with a child). 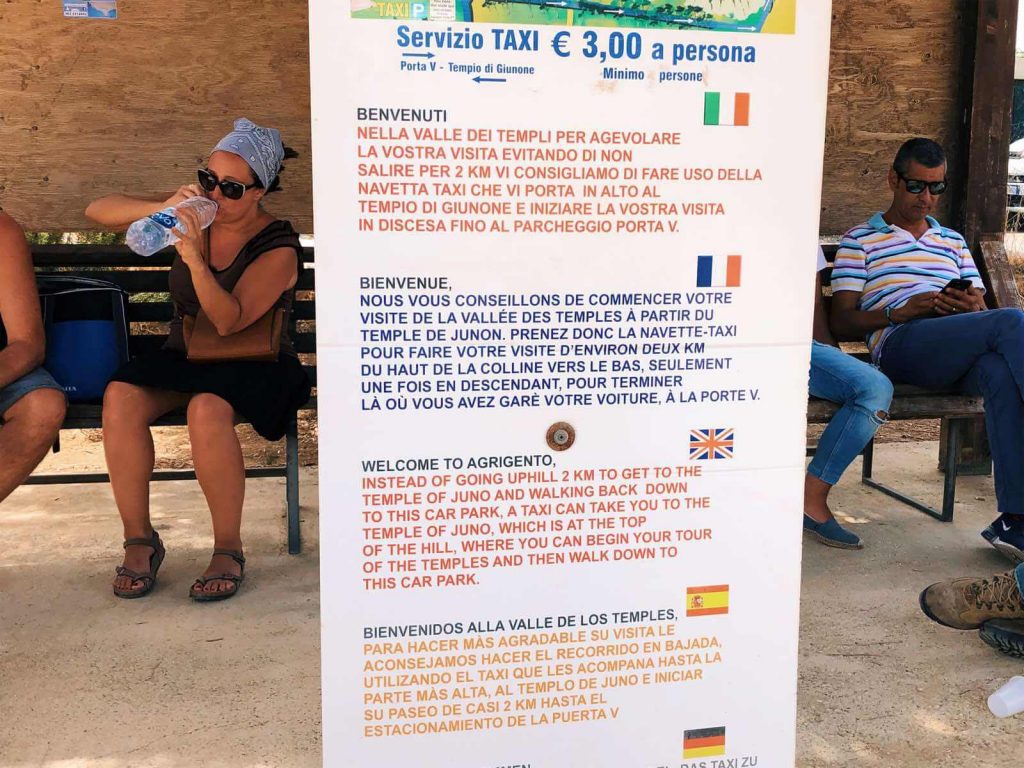 Leave your vehicle at the bottom parking and get a taxi for EUR 3 a passenger – this seems to be the best way to experience the valley.

The price of the parking in the summer of 2019 was EUR 7. Then we had to pay EUR 3 per person for the taxi service which got us to the more convenient entrance. Finally, we bought tickets (EUR 10 per person) and got in.

Admission to the valley is free every first Sunday of the month. This does not apply to the parking and taxis. 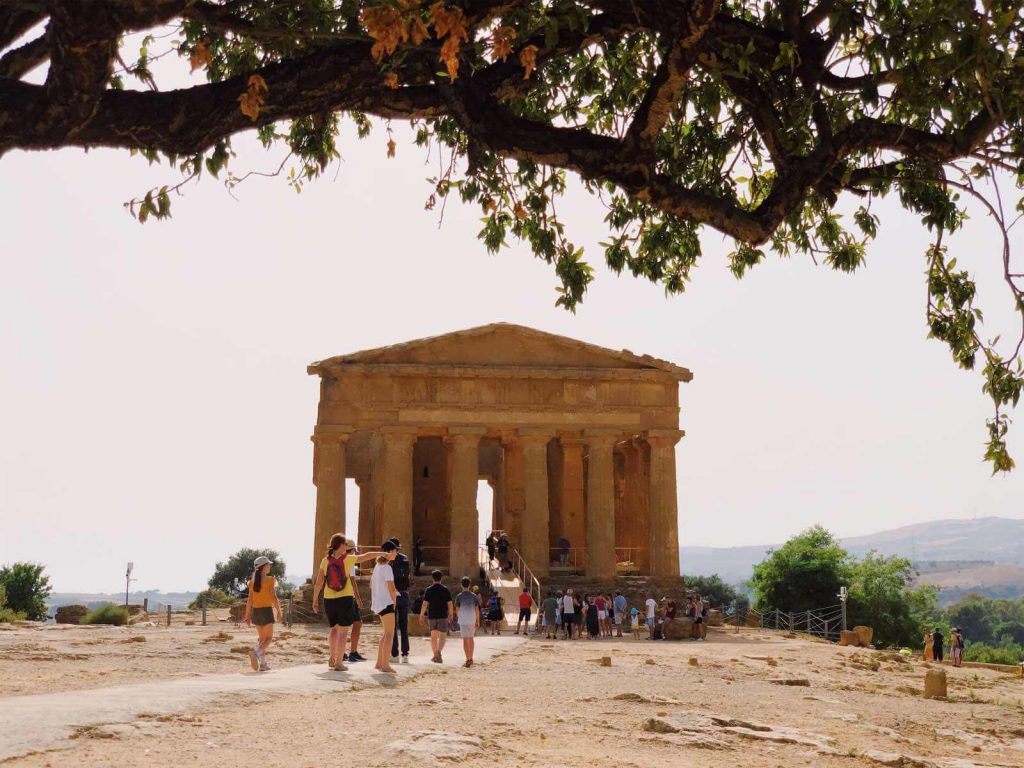 Starting with the Temple of Juno (highest point in the complex), you’ll have a long walk to all of the temples, without any climbing. First you’ll see the so-called Eastern Hill with the Temples of Juno, Concordia and Hercules. The lower area includes the Temple of Jupiter, Castor and Pollux and Sanctuary of Chtonian deities. 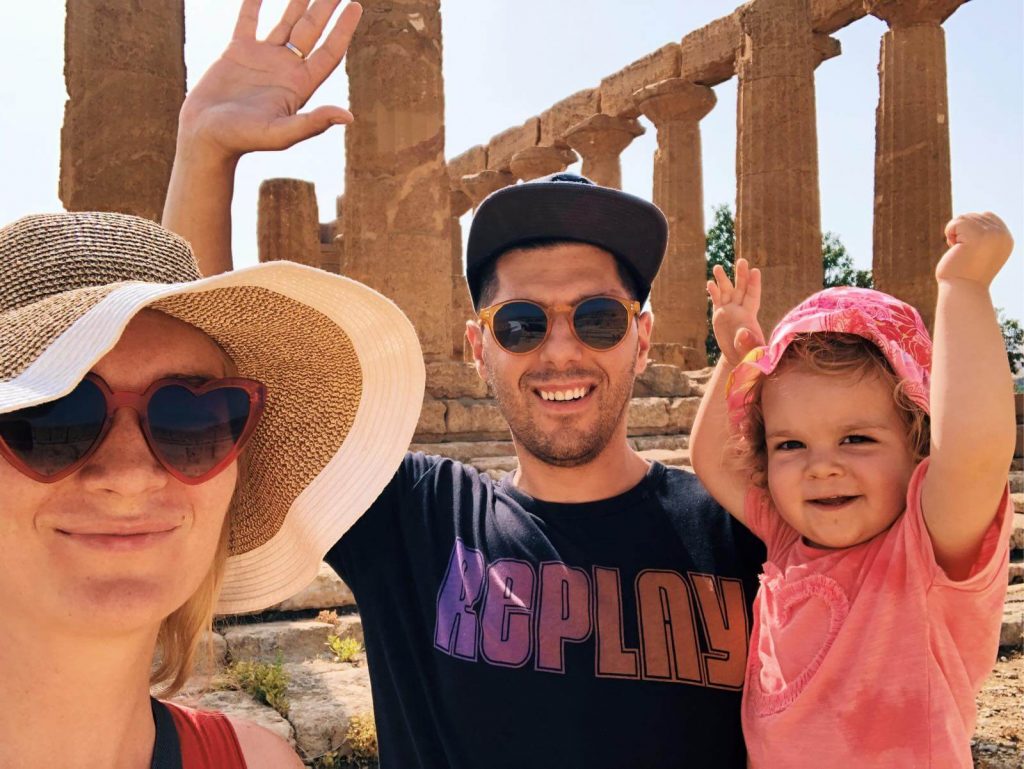 There is also a shuttle bus which costs another EUR 3 per person. It stops at the different temples and is probably a good option in the high temperatures and if you are not able to walk long distances.

We didn’t want to get on this bus as we were sitting too long in the car on the way here. Neither did we see the shuttle bus. 🙂

Shuttle bus at the valley explained

The path we walked on to explore this ancient complex 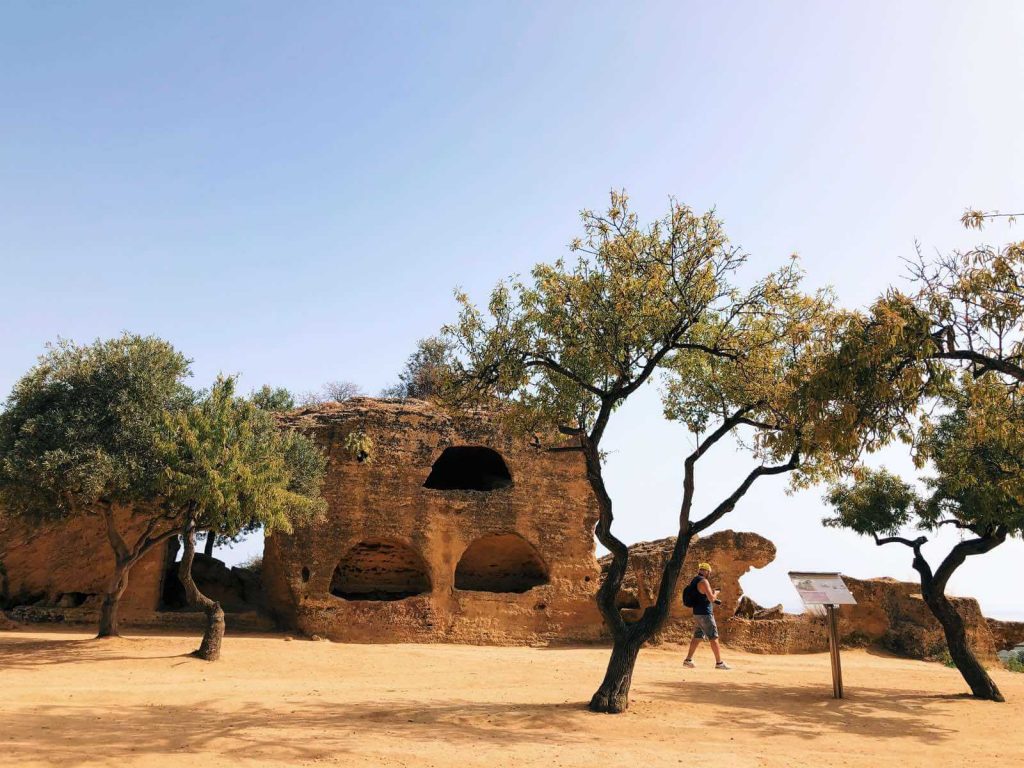 Besides the temples, along the road you’ll see many Roman and early Christian burial places of the later inhabitants of the town.

Not all of the temples are preserved to our days but what we saw was still impressive considering how old the temples are. A major turn off was that visitors are not allowed in the temples, but just around them. Unlike the Parthenon in Athens, where everyone is able to admire the architecture of the temple from inside too. 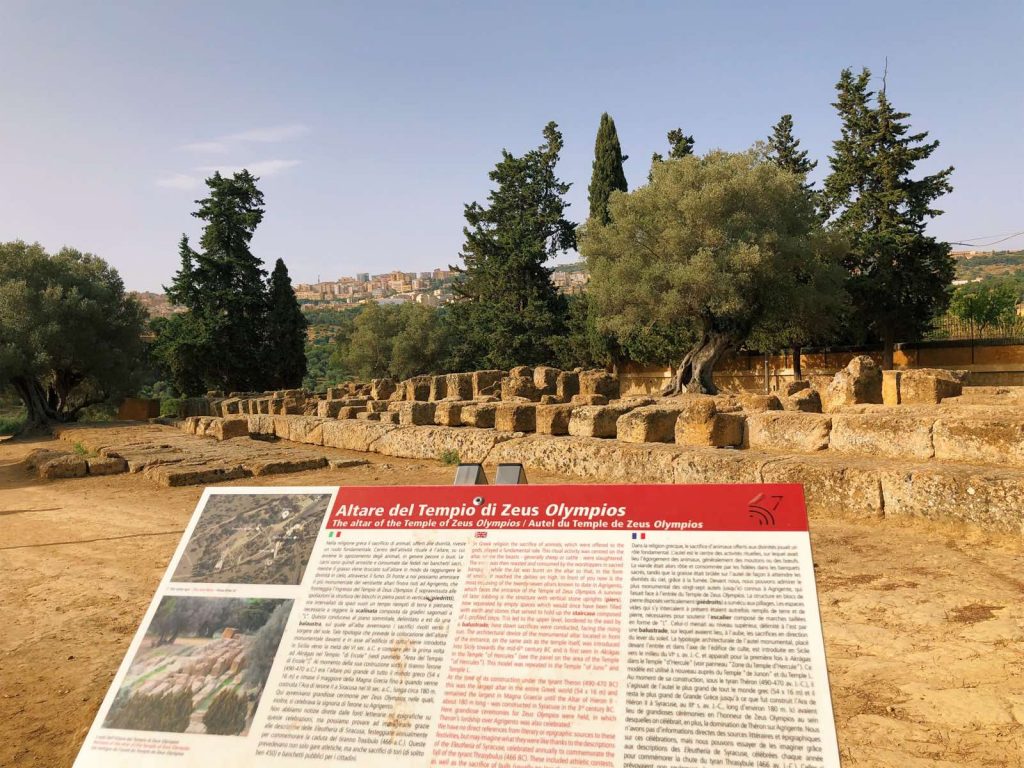 This is what is left of the Temple of Zeus today

All in all, spending more than 5 hours in the car to see the Valley of the Temples in Agrigento felt a bit disappointing at the end. Exploring the valley with a toddler was not the easiest thing!

The place has a unique history, but is not as spectacular as one would expect. Nevertheless, it is the most important archeological heritage in this part of the world I don’t regret visiting at all! If I hadn’t I would regret it because I don’t know when I’ll be around again.

Writing about the experience a couple of month after the actual moment, I now appreciate visiting the Valley of Temples, but I have to admit I expected more and I was not completely happy with the ride getting there. 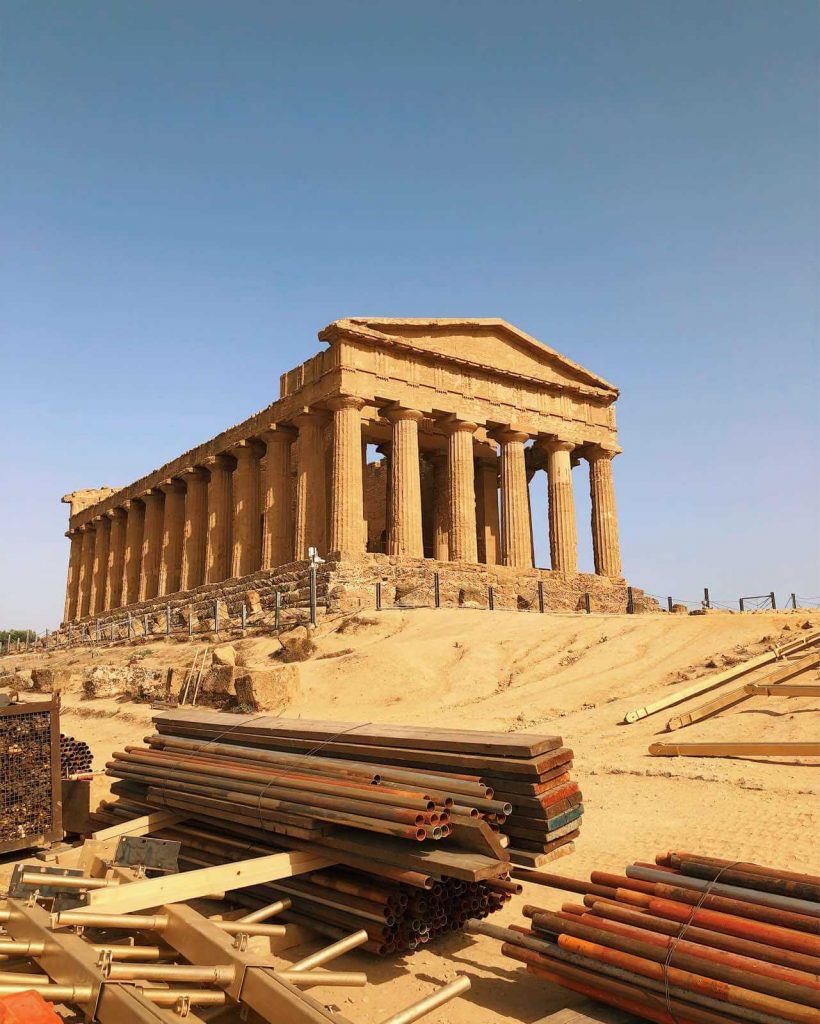 This is my favorite picture from our trip to Agrigento – showing the glory of the Temple of Concordia and some construction materials from our days.

How about you? Have you visited and how did you like the place?