Here is a must – visit Trogir in Croatia

Trogir is a picturesque small paradise on the Adriatic coast, close to Split. The city is illustrative of Dalmatia and an ideal half or one-day stop in your Dalmatian adventure. Wandering around the old town and the Riva, the sea promenade, is a must-do when in the region.

Trogir impresses with numerous buildings and churches dating from the 13th century, as well as the city walls and a fortress from the 15th century. In 1997 it was listed on the UNESCO World Heritage List as it is one of the best-preserved medieval towns in Europe.

I have been to Trogir every summer of the past ten years and I am excited to visit every time! Let me tell you why! 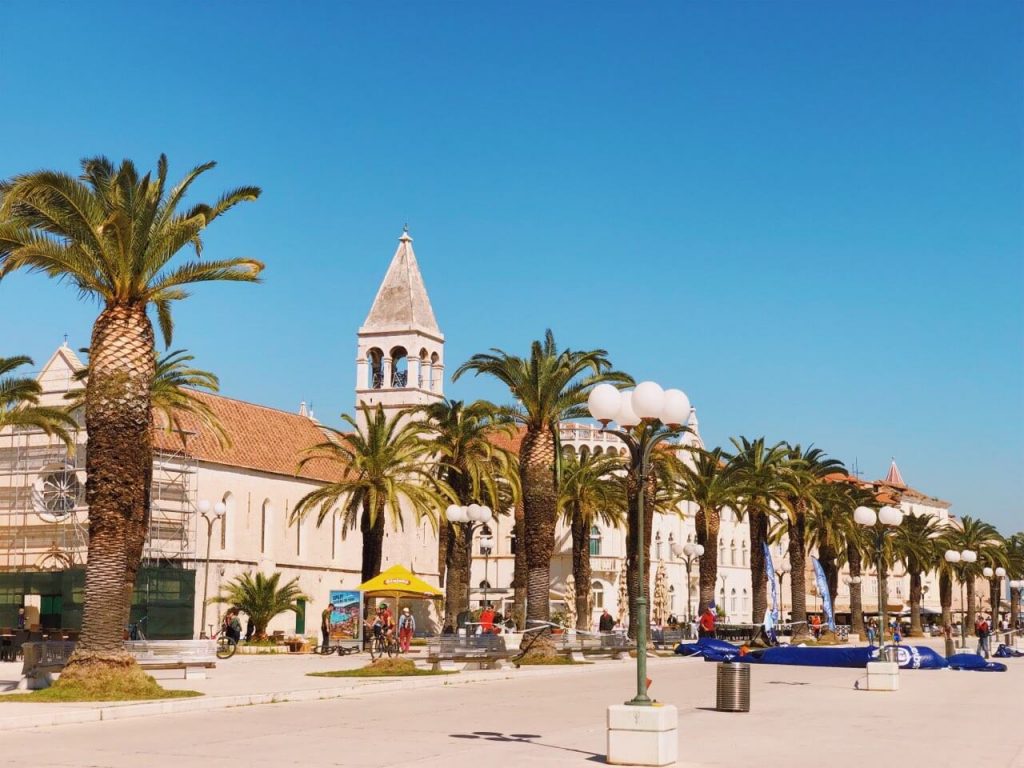 The Cathedral and its bell tower

The Cathedral of St. Lawrence is the main attraction in the old town of Trogir. Its construction began in 1213 and was largely completed by 1251, but finishing works lasted until the 17th century.

A statue next to St. Lawrence Cathedral

The bell tower is a little extreme to climb but will reward you with a charming rooftop and a nice view over the city. 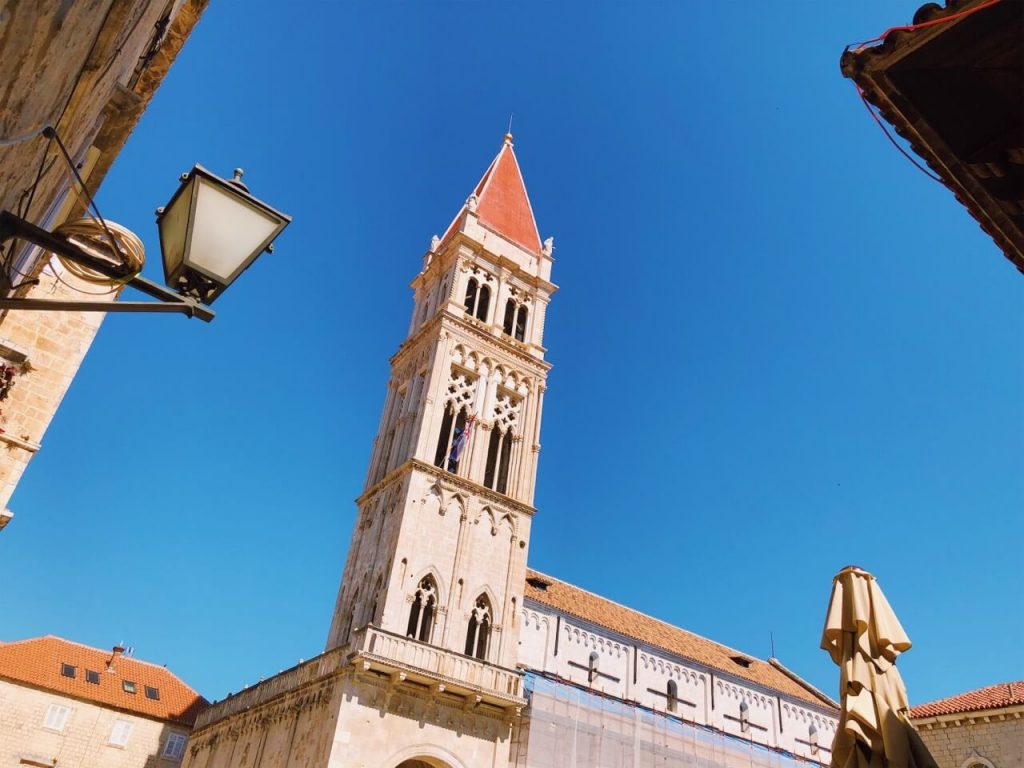 It’s difficult to catch the cathedral in one pic! Here’s my try.

The Kamerlengo Fortress, located as the end of the old town by the sea, served both as a castle and fortress and is one of the city’s best attractions. It was built by the Republic of Venice in the early 15th century. Climb up the castle walls to enjoy the beautiful seas view from the top.

Also, be sure to check out if there are any concerts when you visit. A concert at the fortress is always a good idea! 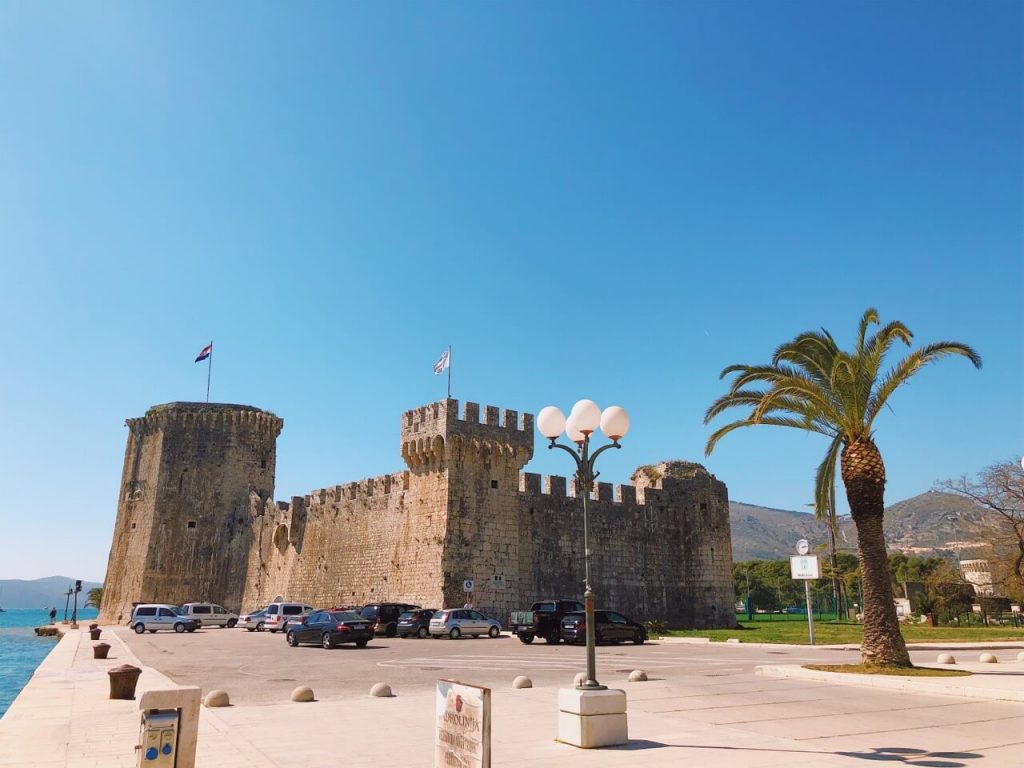 The old town, the city walls and gates

The old town is a wonderful mix of old medieval buildings, wonderfully preserved city walls, a couple of impressive city gates, small squares and narrow stone-paved streets that will make everyone fall in love with the atmosphere. Trogir has one of the best old towns in Dalmatia, so spare at least an hour or two to just walk on its streets and… getting lost. 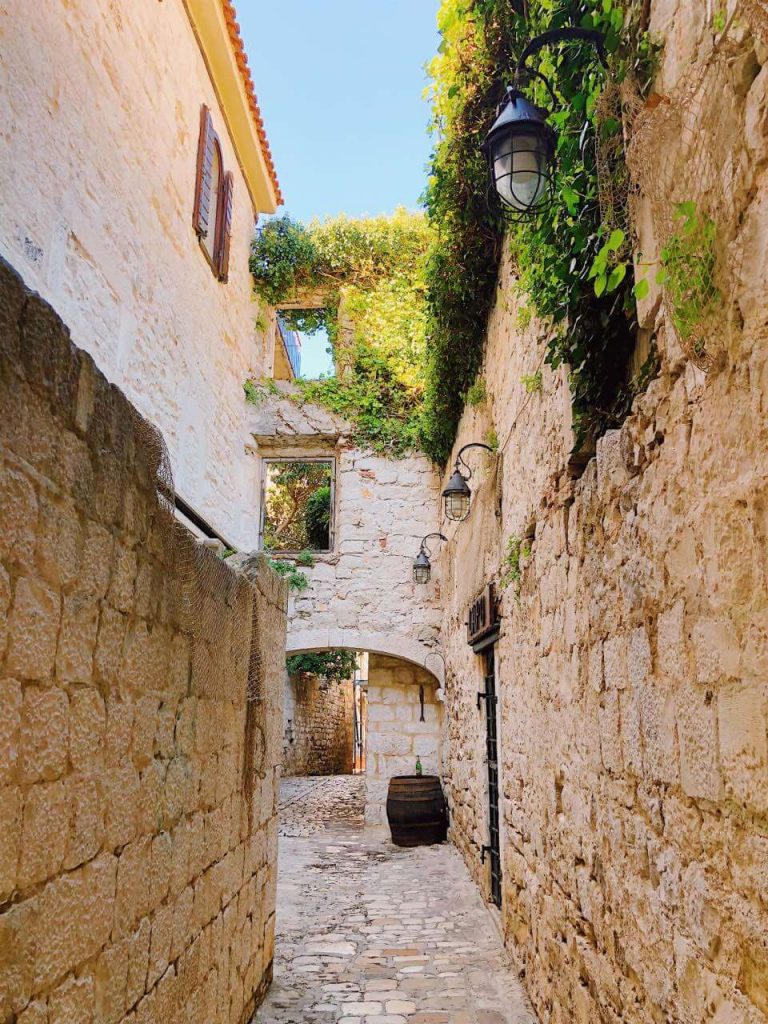 The old town will surprise you with many hidden jems! 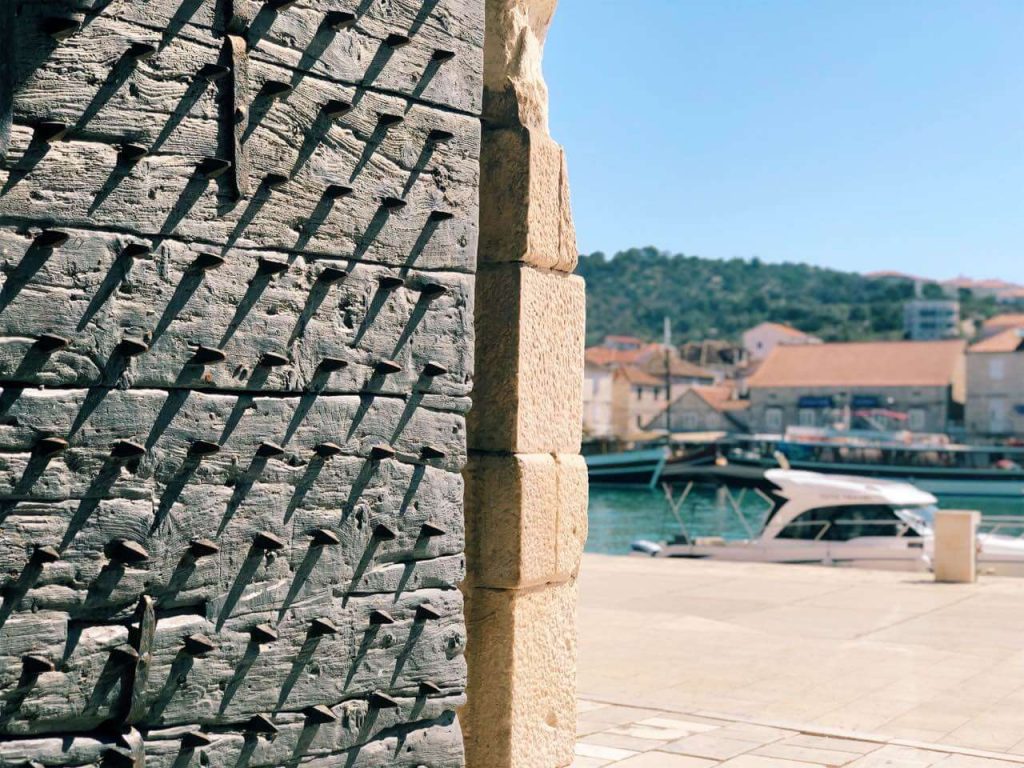 One of the gates protecting the old town

The Riva here is a wide seaside promenade famous for its palm trees. Sitting at one of the numerous cafeterias and restaurants and walking around is one of the best experiences in the city and what the locals do a lot. 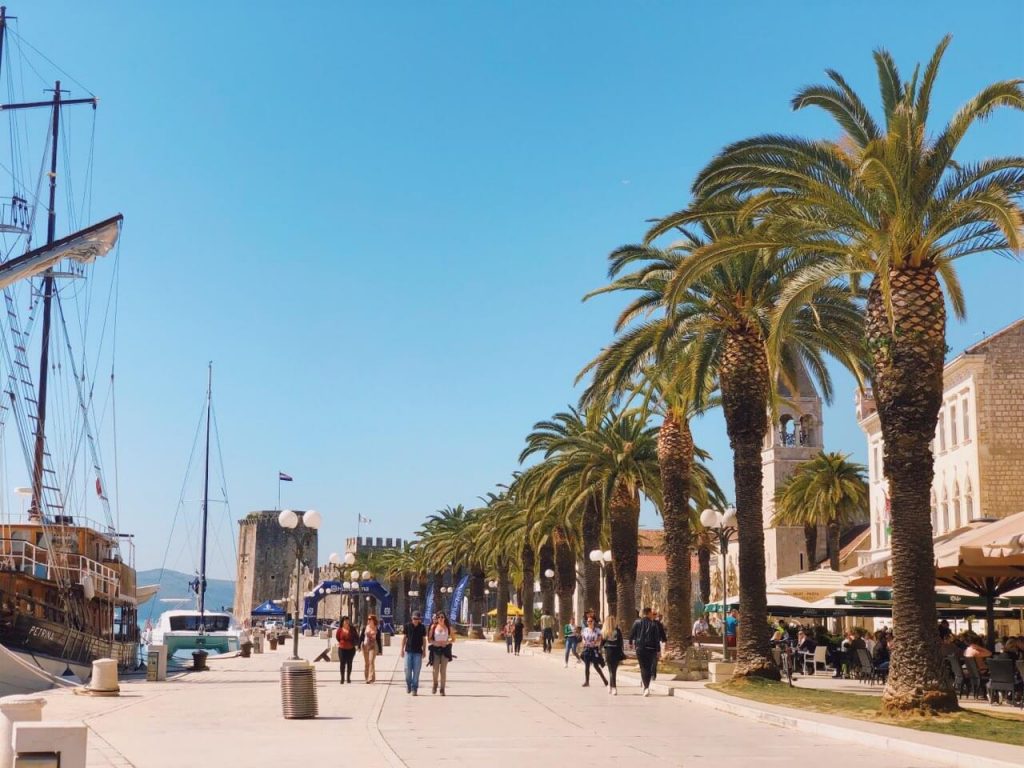 The charming Riva in Trogir

How long to stay?

Half a day or one day will be enough to see all and appreciate the place. Trogir is an ideal time-saving location, if you want to feel and understand Dalmatia, but cannot stop at every small Dalmatian town.

If you plan a longer summer vacation here, you’ll have plenty to do in the old town in the evenings. 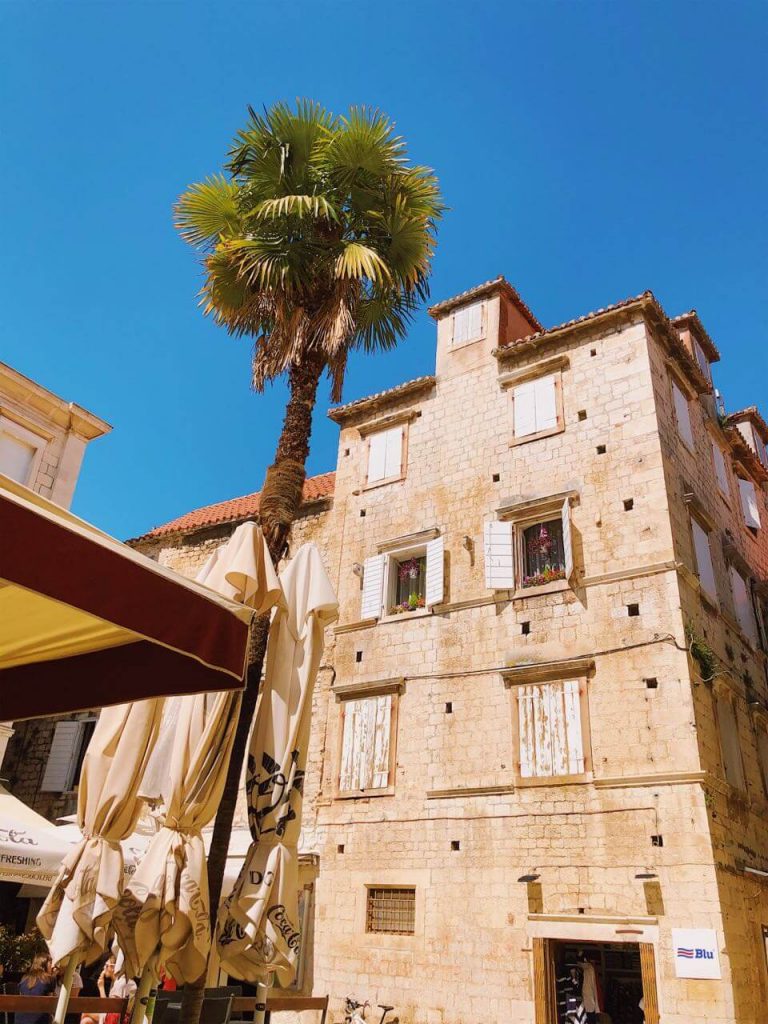 The Mediterranean vibe in Trogir will make you want to stay longer!

Although Trogir is a small town, it is properly connected. The Split airport is closer to Trogir rather than Split. It’s just 5 km (3 mi) away. However, there is no train station in Trogir with the nearest ones being in Split (28 km/17 mi) and Sibenik (47km/29 mi).

Split is the closest big city, which you’ll be able to reach in less than 30 minutes by car. You can also use an intercity bus, or by the local bus line 37. It runs between Split and Trogir daily and is a bit cheaper than the intercity bus, but has a few more stops on the way. 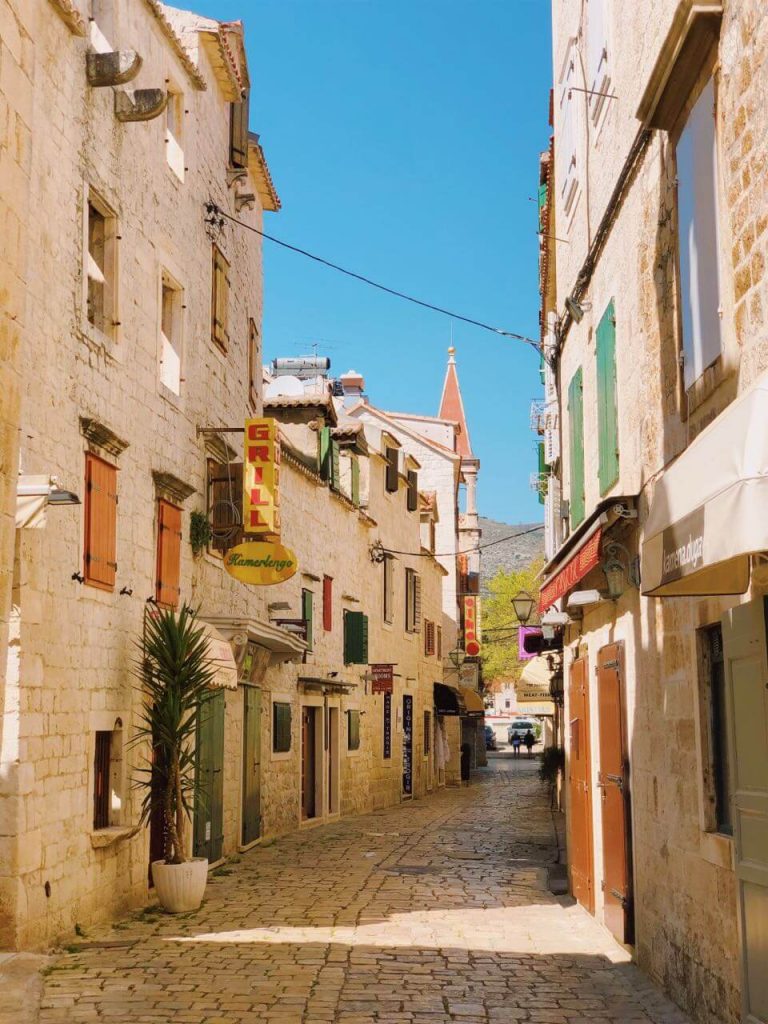 Visiting both Split and Trogir is very common

The bus station is right at the entrance to the old town and can connect you to the rest of Croatia. There is also a large parking area, where you’ll be able to find a spot for your vehicle.

There is a marina and a port in Trogir, but no international routes pass through here. You’ll need to go to Split or Zadar to catch one of those. 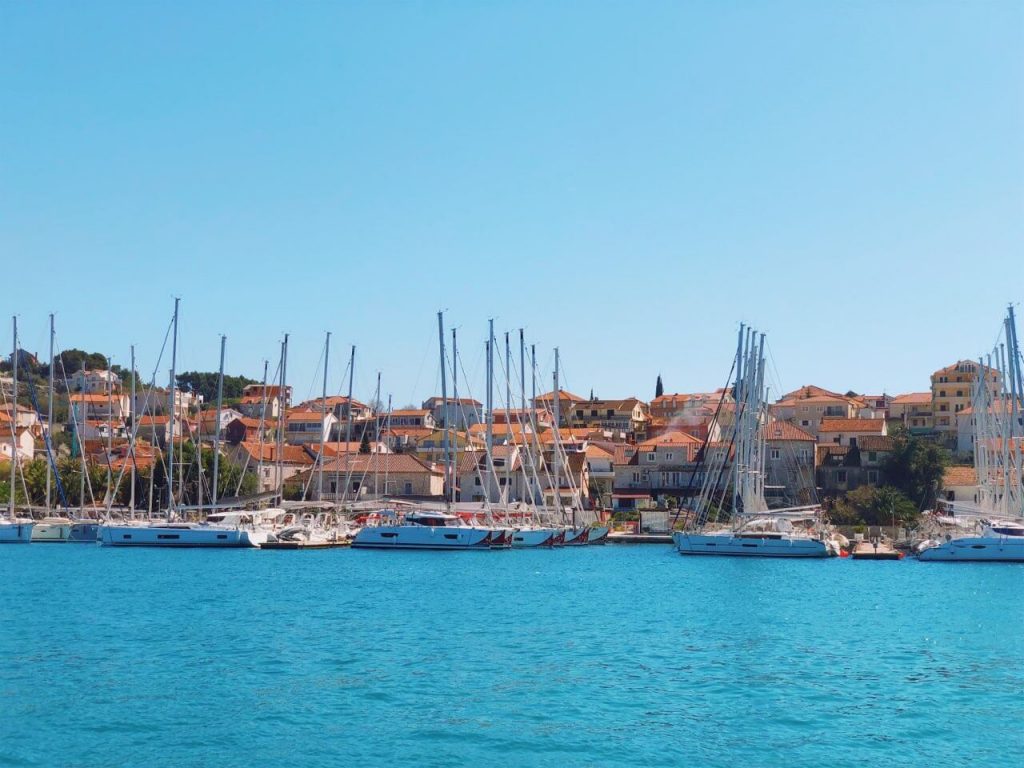 The marina in Trogir

Exploring the magnificent islands nearby is also an option you don’t want to miss. Brac, Hvar, Vis and Solta are easily reachable and there are plenty of one-day excursions to these destinations during the summer. 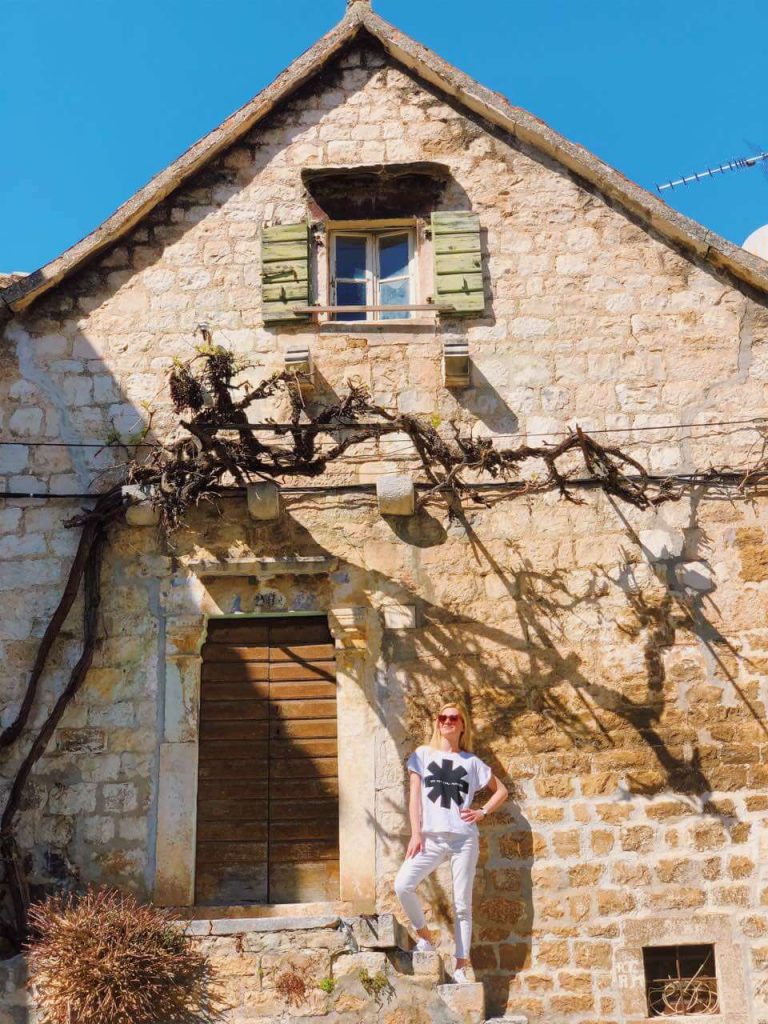 Exploring more places in Dalmatia is a must! Plus, they give plenty of photo opportunities!

Visiting Trogir pregnant or with children

Trogir is a fine city to visit either pregnant or with children. The bell tower is not suitable for climbing when pregnant or by children. The Kamerlengo Fortress will not be a challenge to a pregnant lady. I am also sure that children will be happy to explore this medieval castle!

The beaches around are amazing and perfect for family vacations. As everywhere in Dalmatia, you must be well-prepared for the hot temperatures in the summer. 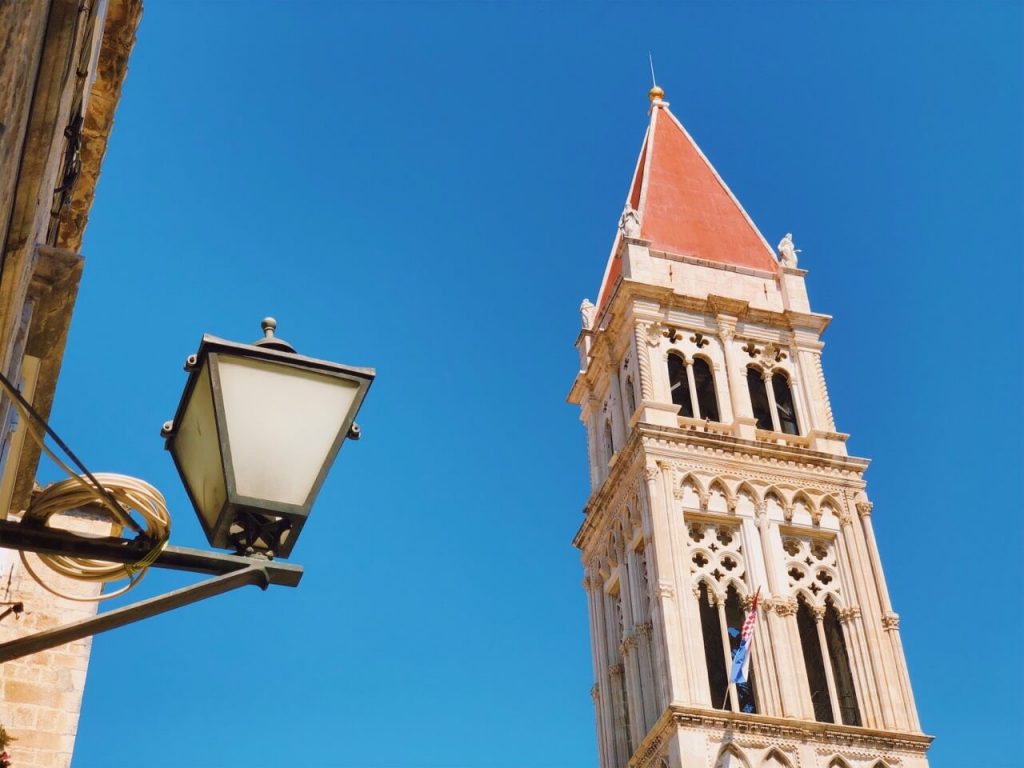 The view from the top is stunning, but be careful with the stairs!

Is Trogir already on your wish list? Do you need more info on this Dalmatian city?