Graz is magic in Christmas time 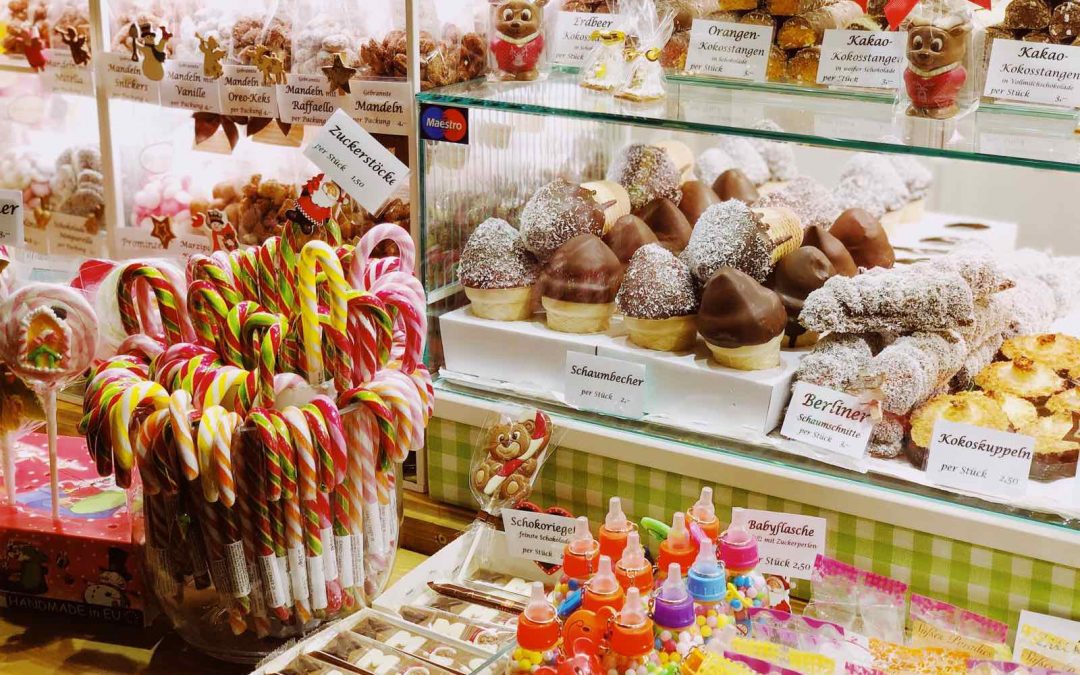 Last year I found out that Christmas equals magic in Austria after I visited Salzburg during the lovely Christmas fair there.

So this year I had to check another Christmas market in beautiful Austria! The Advent in Graz, the capital city of Styria, is considered the best one in the country. Plus, it is only a two-hour drive away from Zagreb in Croatia, which made it perfect for my family’s holiday plans.

Graz is the second-largest city in Austria after the capital Vienna. With some 300,000 residents it is not too inhabited, yet it has a large center with numerous interesting sites and museums to visit.

The city is known as Gradec in nearby Slovenia and is historically important to the country. This is also valid for Croatia as today the city of home to some 8,000 Croatians. 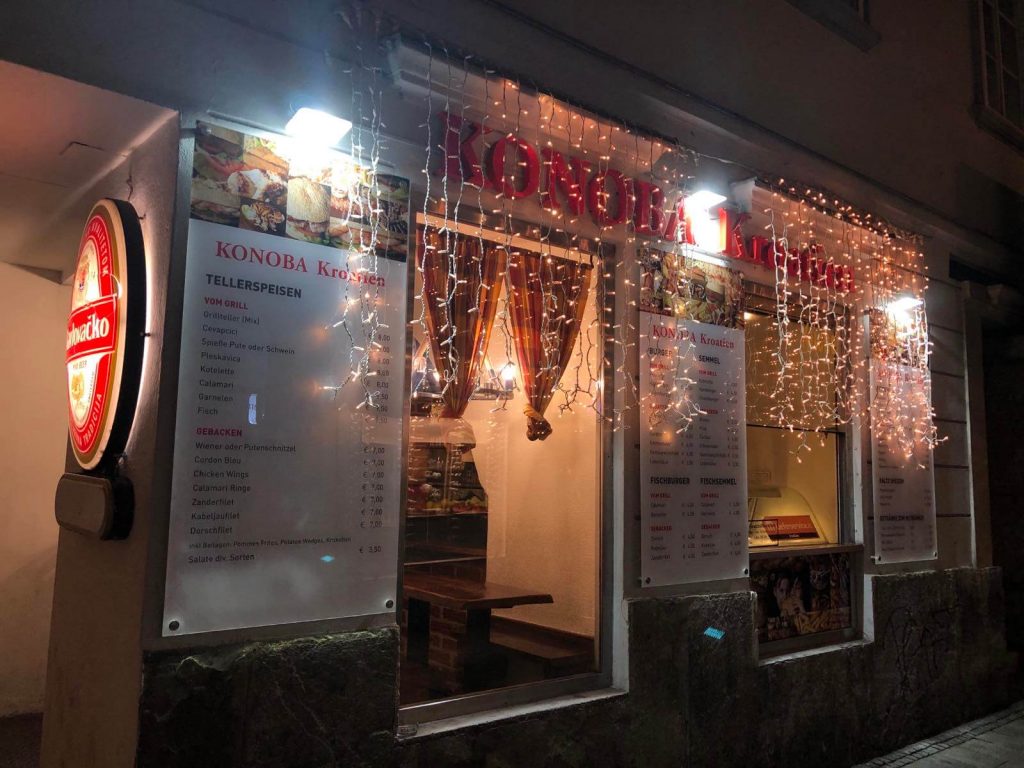 Here is a small Croatian restaurant in the city center

The Advent in Graz

The Christmas markets are… 15

The Advent in Graz so unique because Christmas is everywhere in the city for a month starting at the end of November until 24 December! The Christmas market happens at different locations across the city and one feels like being in a huge Christmas theme park! The different markets offer something for everyone. 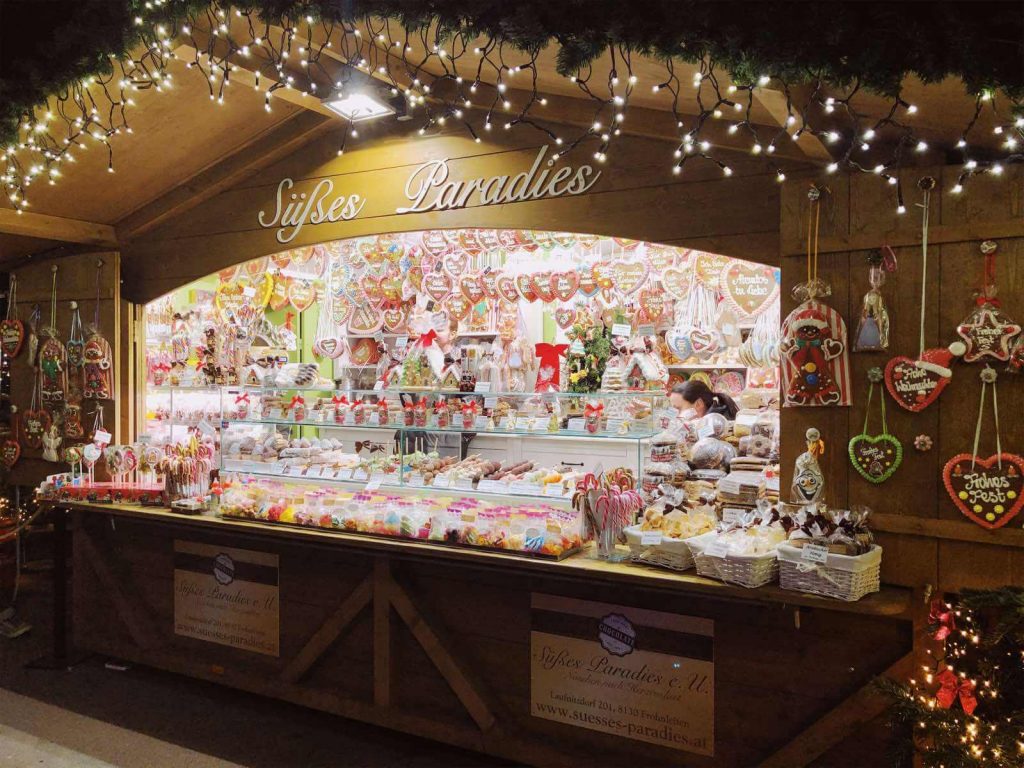 Christmas candy for everyone!

The largest market takes place at the square in front of Graz Rathaus (City Hall). The impressive facade of the building transforms into a light show when the sun is down. Oh, there is also a beautiful and very tall Christmas tree surrounded by numerous charming wooden houses selling beer, punch, mulled wine, traditional sausages, candies, toys, and everything nice! 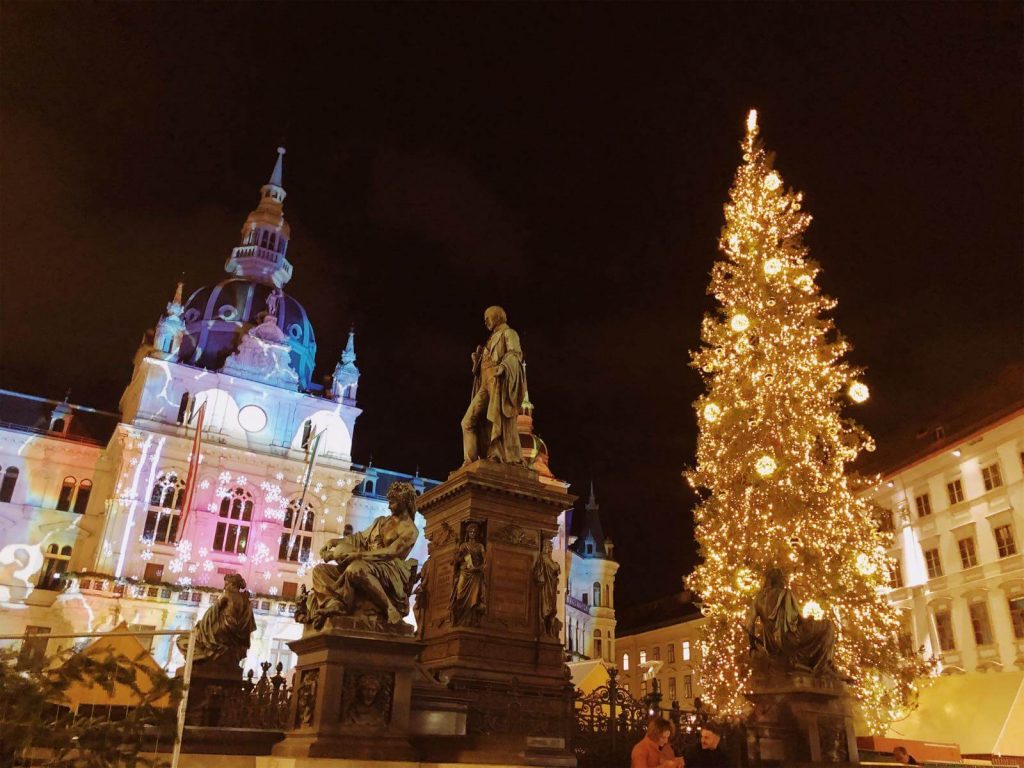 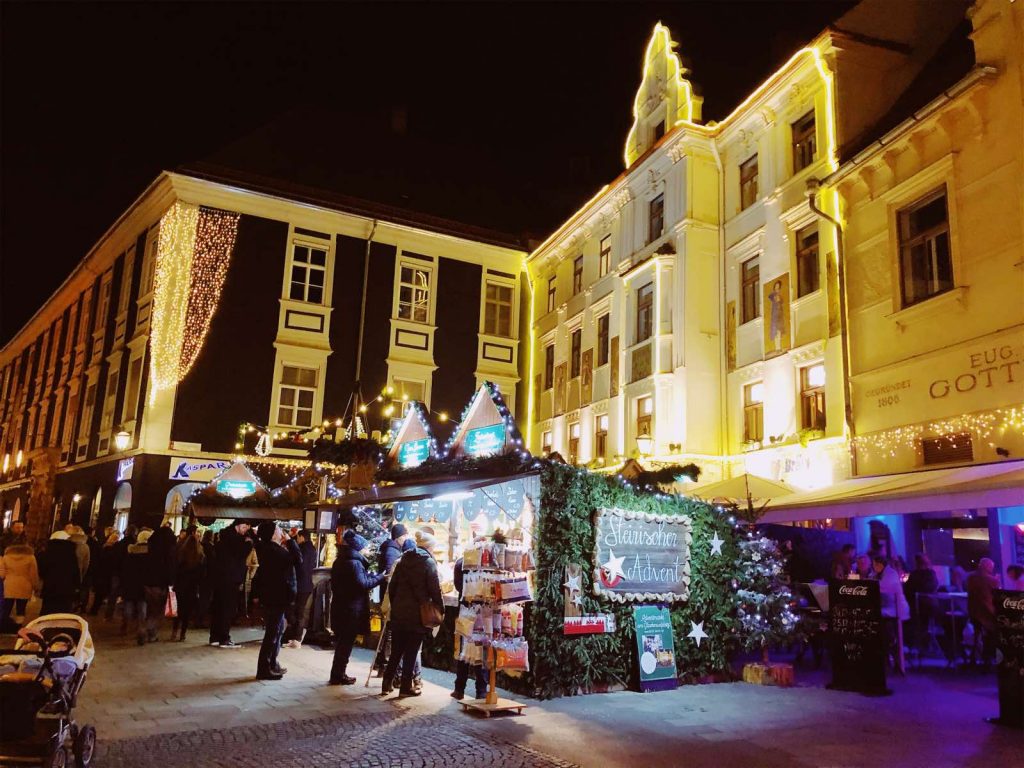 The Christmas market on Glockenspielplatz

Since this market is the largest and probably the busiest, it is not the best place for a toddler. We were out with the baby stroller but struggled to move around because of the crowds before Christmas. There is a Kinder-Adventmarkt (Children’s Christmas market) just minutes away, where our 2-year-old Anna had a lot of fun. 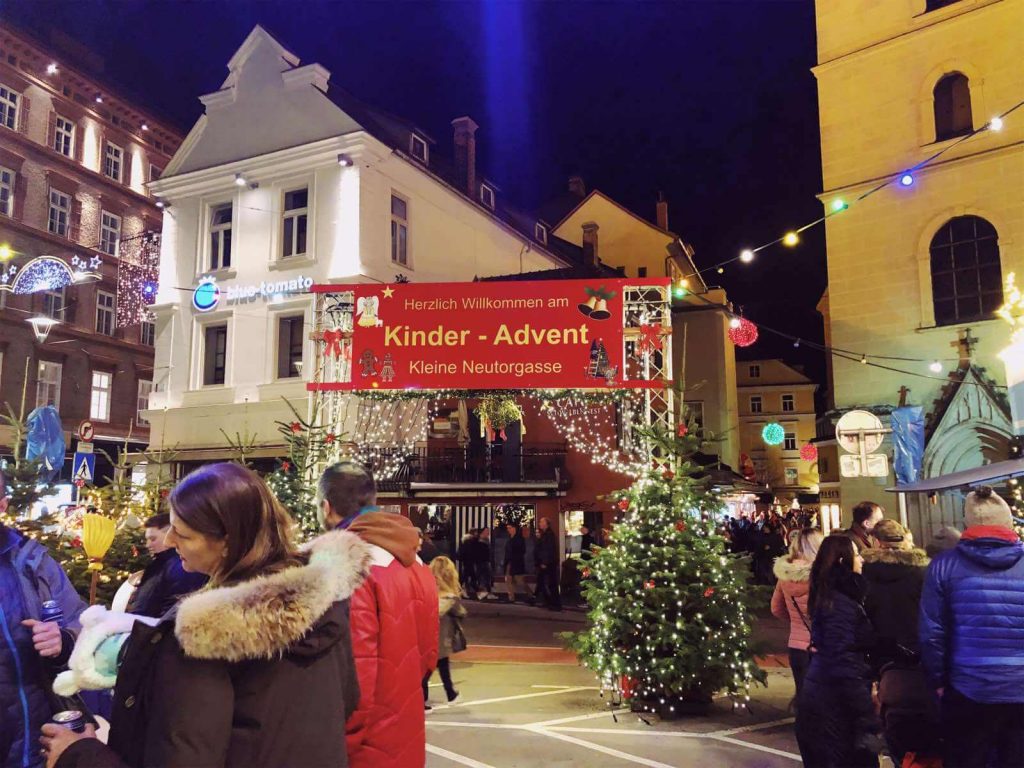 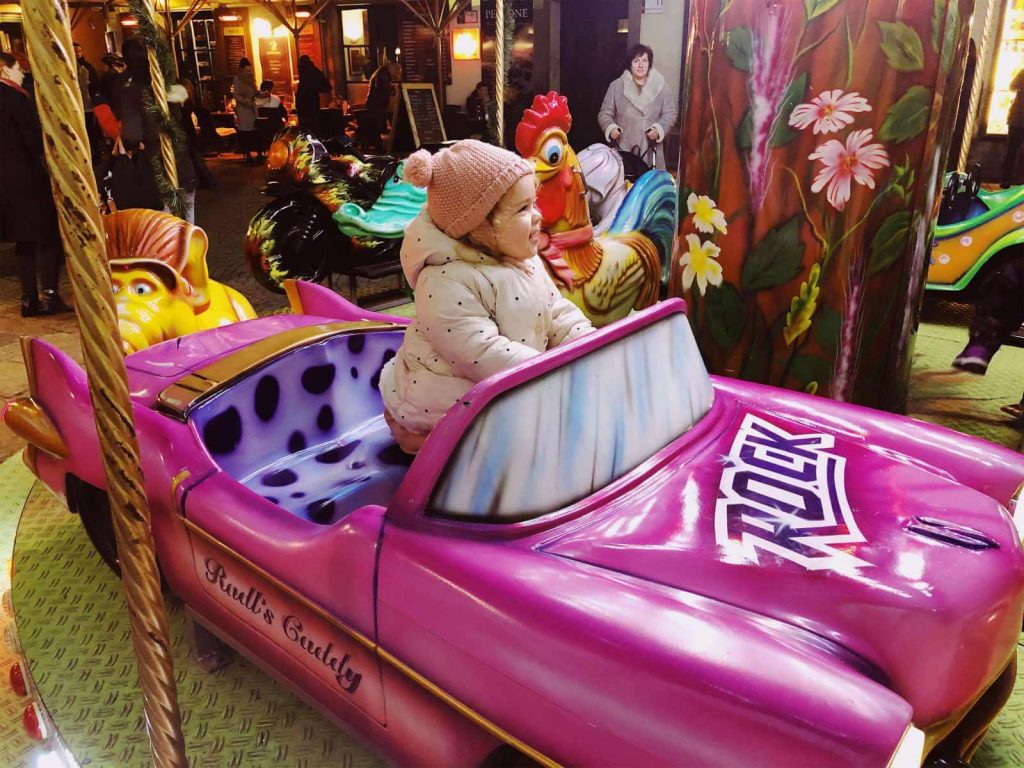 A ride on the carousels across Graz costs EUR 2.5. There are several carousels at the different markets.

Right next to the Children’s market, we found ourselves at the oldest Christmas market in Graz. Namely, the Old Town Traditional Christmas Market, starting next to the Franciscan church. The market in the Franciscan Quarter is yet another charming part of the advent offering local food, drinks, and handmade items. 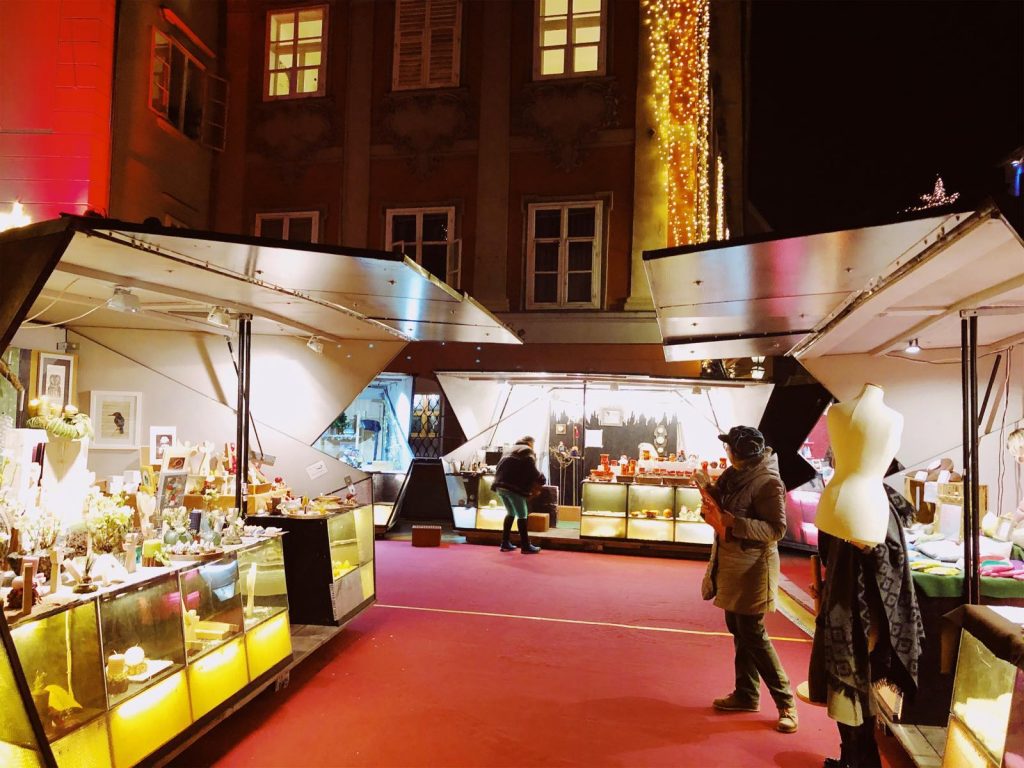 The Arts and Crafts market in the Joanneum quarter 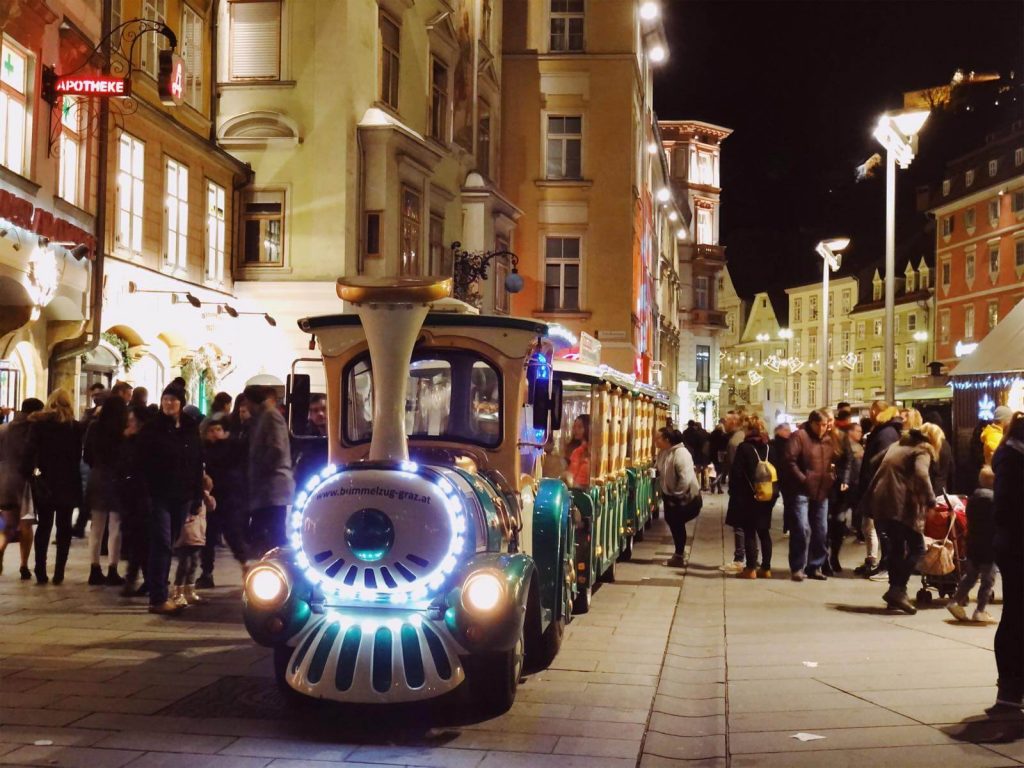 Who doesn’t like to see some cool ice sculptures?! The inner yard of the Landhaus Courtyard becomes the home of a life-size nativity scene. The tradition of carving out the figures from ice here started in 1996 and is now one of the most popular winter attractions in the city. We enjoyed seeing the ice figures, but it was a warm December (10ºC/50ºF) and the ice figures were melting. Still, this was one of the most entertaining places for Anna. 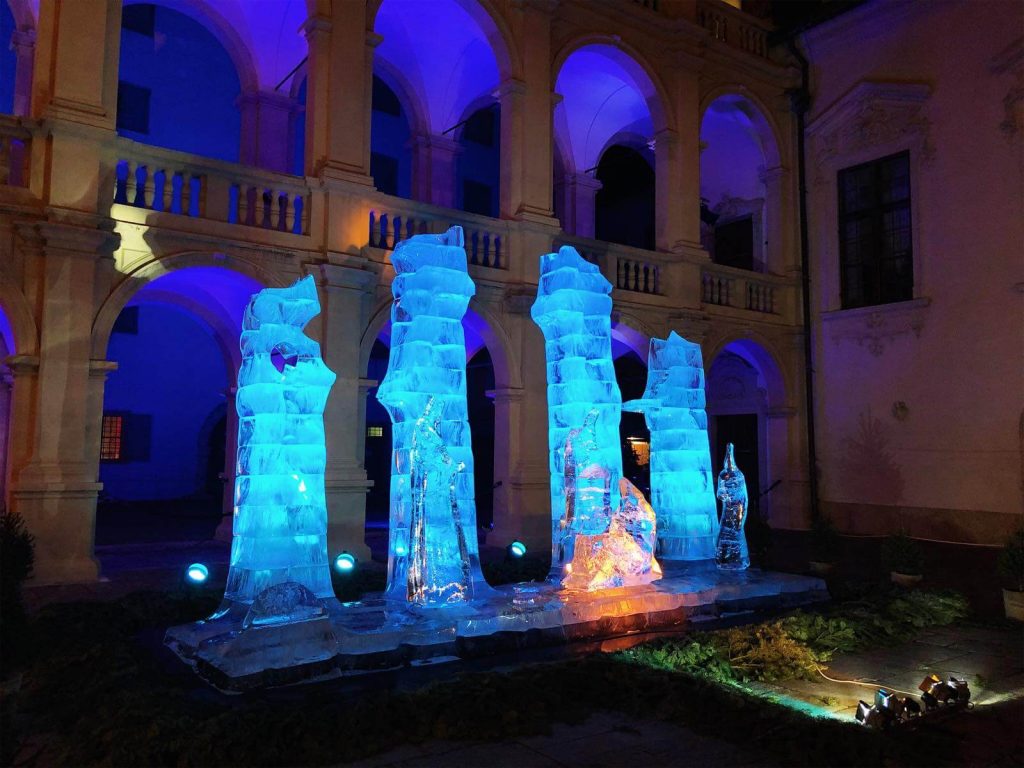 If you google Christmas in Graz you’ll inevitably see some frightening monster-beast-Halloween-like creatures taking over the city! This happens at the so-called Krampus Christmas parade, which takes place at the beginning of the Christmas fair in Graz. Krampus are people masked in scary furry costumes that seem very high budget to me.

We came to Graz at the end of the Advent and we missed the parade. Even if we were in town, we had to skip it because it does not seem a good place for a two-year-old!

Attractions in Graz during the Advent

The Castle hill is the place to be

Schlossberg (the Castle hill) is a 475 m (1,558 ft) high hill at the historic heart of Graz overlooking at the city. I consider the hill the absolute must-see of the city. The main sites are a demolished fortress and the famous clock tower of Graz. Furthermore, the views are beautiful, the air is fresh, the place is perfect for walks and photos. We had some fine cappuccinos at a café on top of the hill. There were a couple of more places to eat and drink. 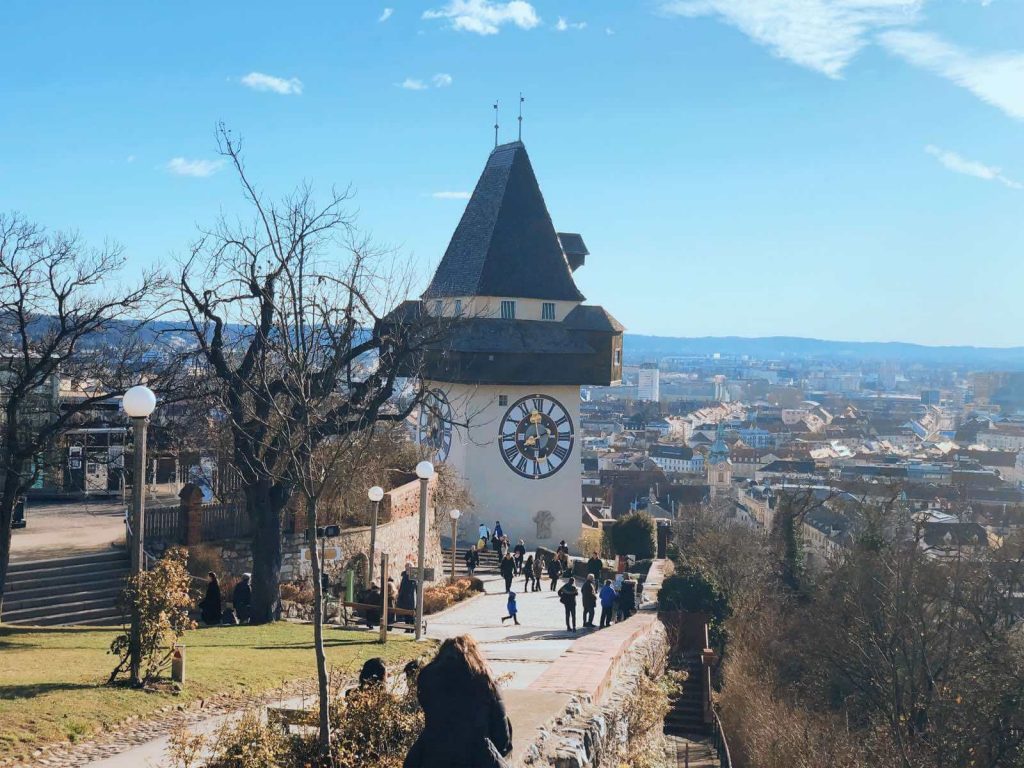 The Uhrturm (Clock tower) was first mentioned in 1265. Today it is the landmark of Graz. 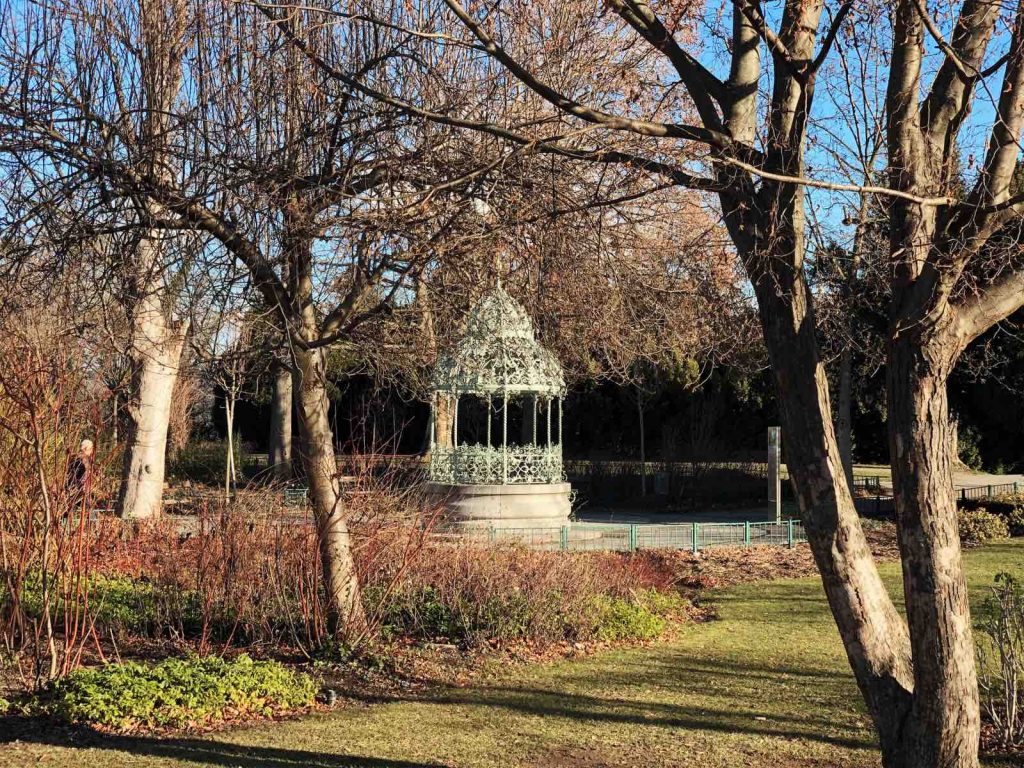 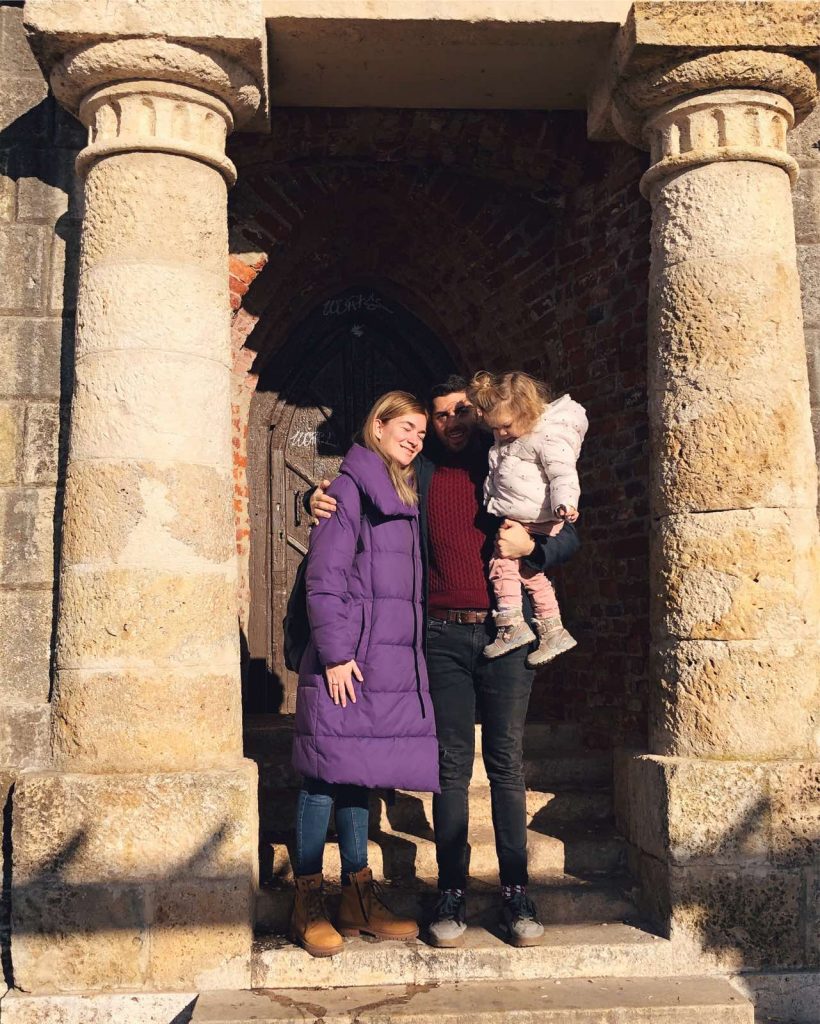 At the Egyptian Door on the hill

Another thing making the Castle hill even more interesting is the funicular that can bring you here.

Funiculars and tram museum for the nerds out there

Schlossbergbahn is the Castle hill funicular, which will bring you up the hill in a minute and a half! It is easy to get in and out and we had no trouble traveling with a toddler. The funicular was working regularly even on Christmas days, which was lovely.

The Tramway Museum is one of the places I really want to check out the next time I visit. It displays retro streetcars and funiculars, which seem so cool if one loves traveling by railway transportation and feels happily nostalgic around old railway vehicles (as myself)! 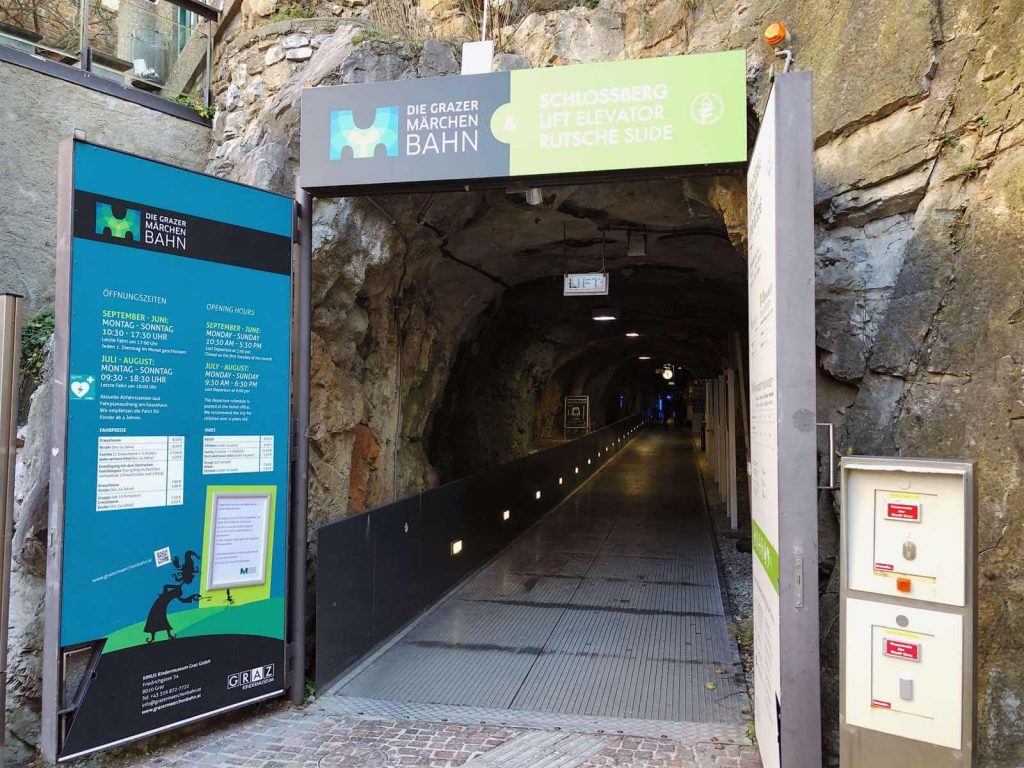 The entrance of one of the funicular stations 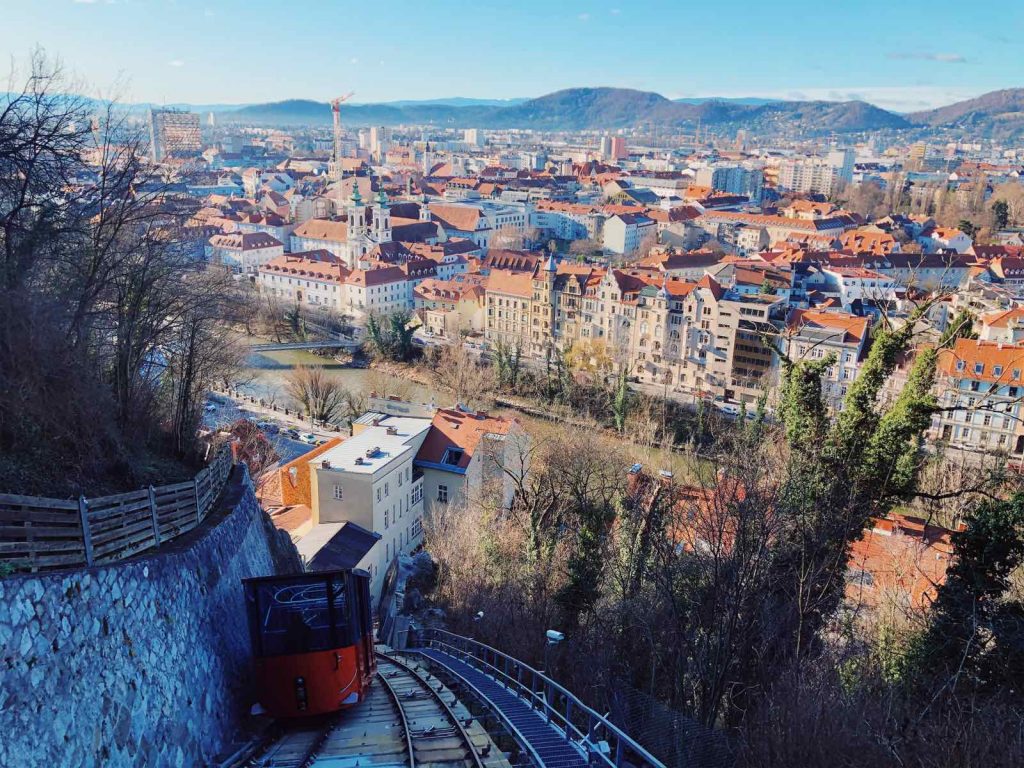 On the funicular in Graz

The Landeszeughaus (Armoury) is the largest of its kind in the world and considered one of the city’s top attractions. Sadly, it was not working during our stay. The same applies to Kunsthaus, the Museum of Contemporary Art, which I am really looking forward to visiting next time. 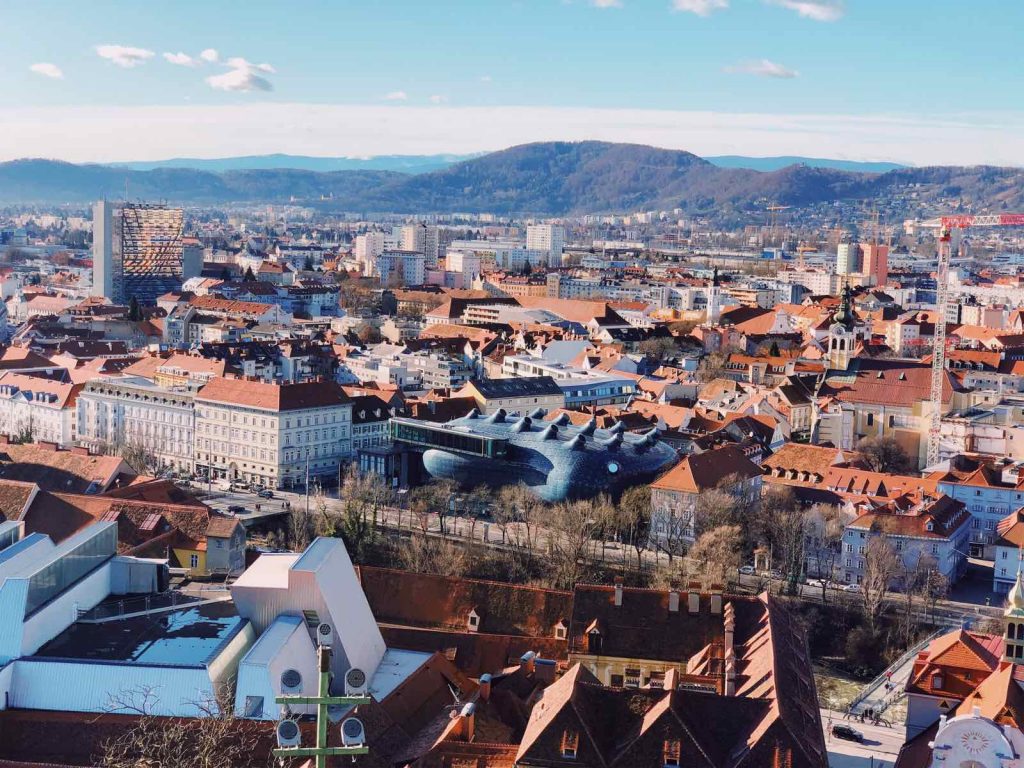 The building of the Museum of Contemporary art is really something! 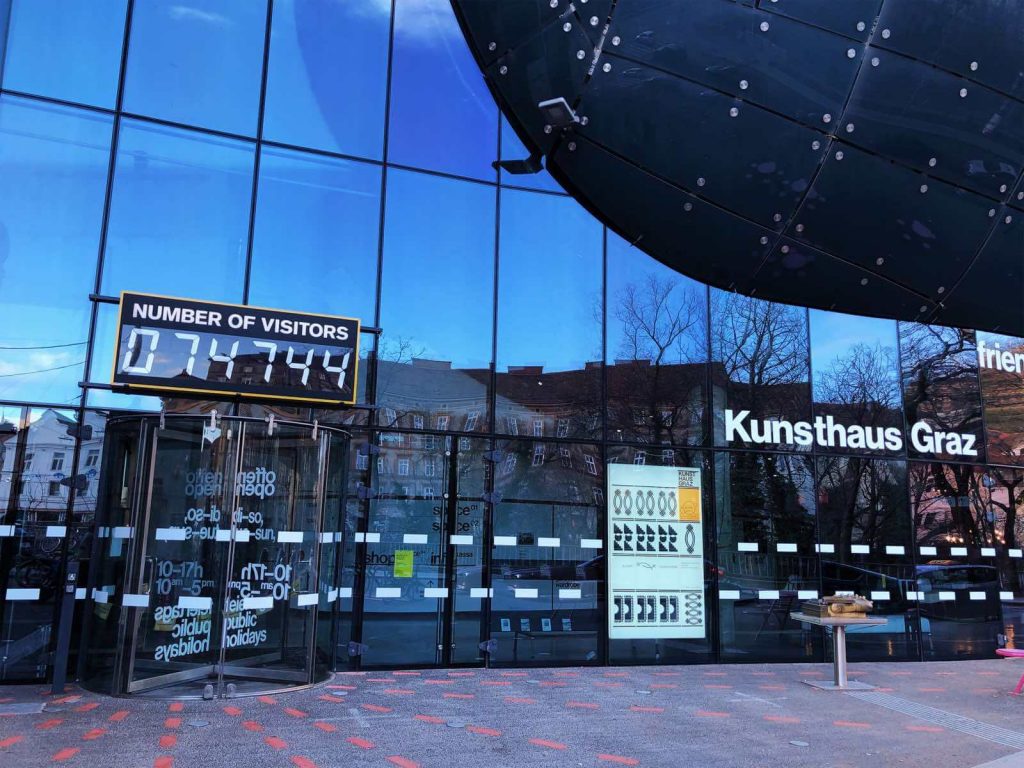 Murinsel, an artificial island in the Mur river, is always open. It was installed in 2003 as part of the activities celebrating Graz as the European Capital of Culture. Everybody loved the island and it is still here today! 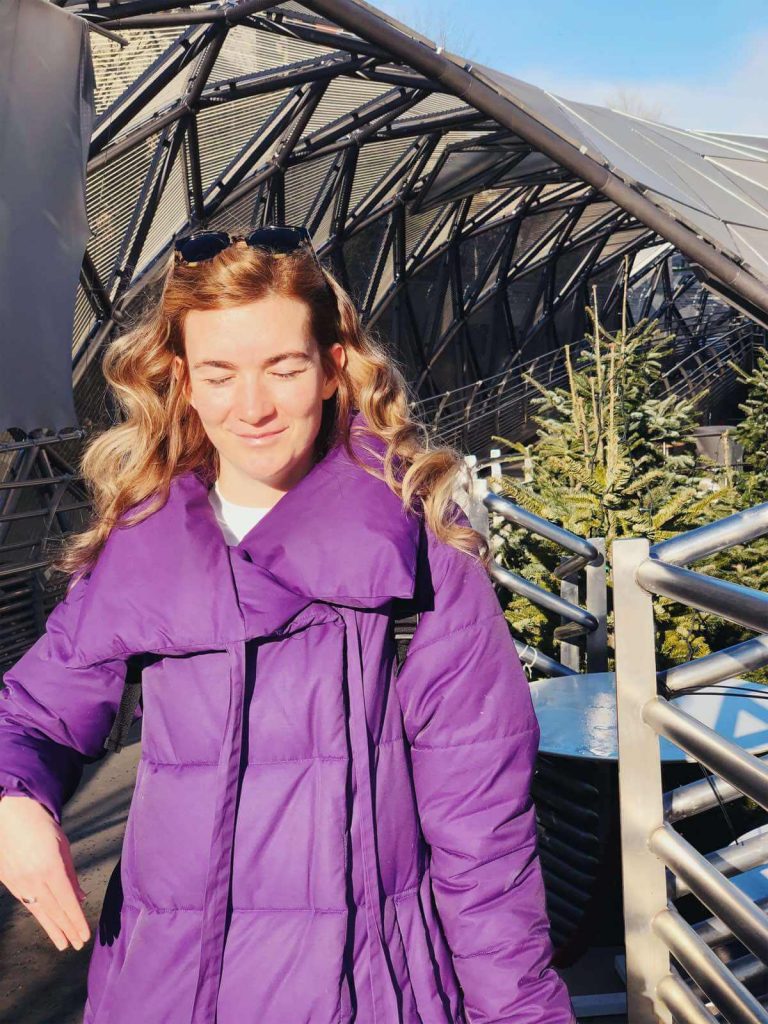 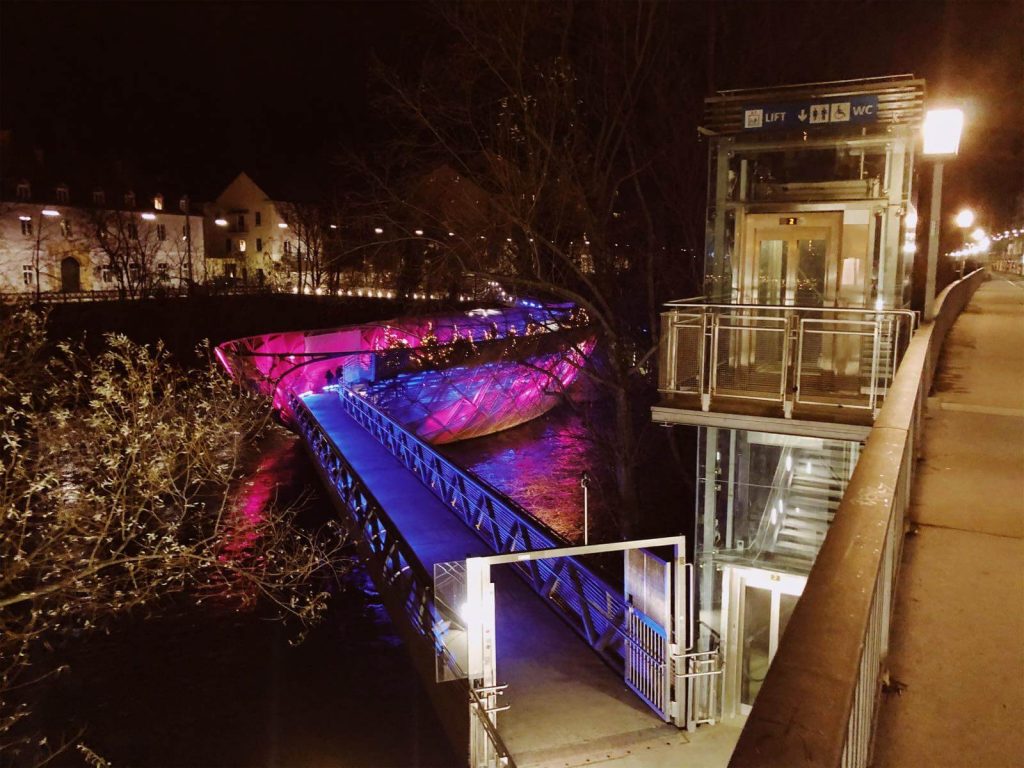 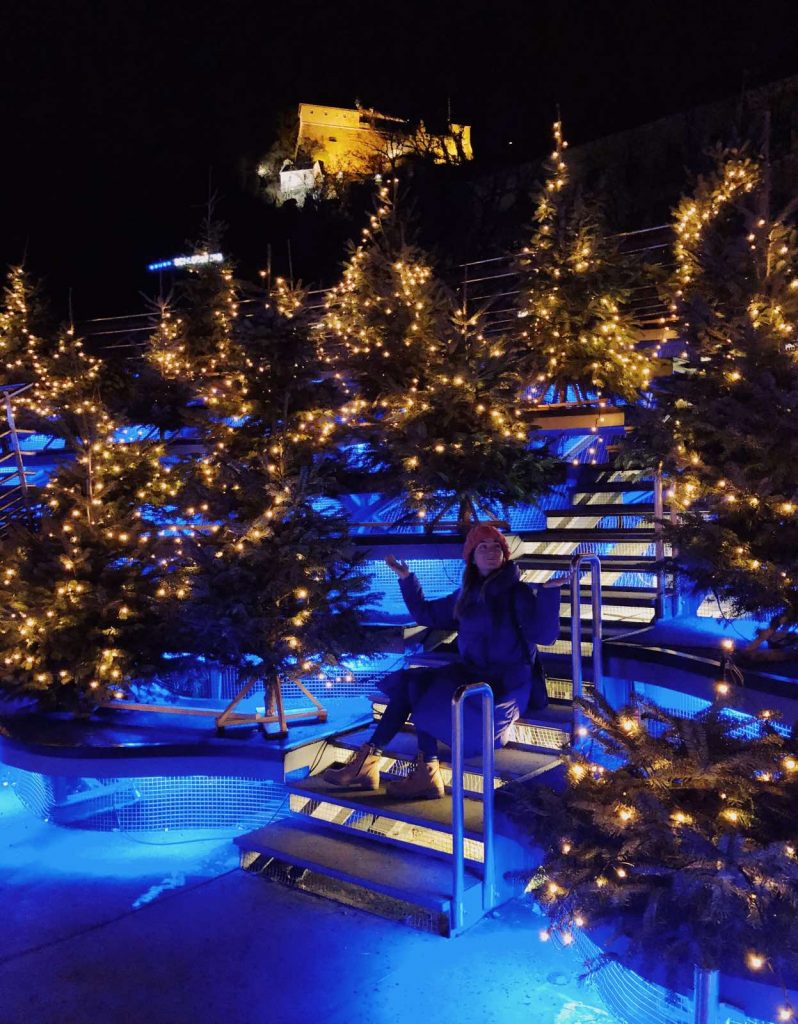 Finally, as in many other charming European cities, just walking the streets in the city center is a rewarding experience! 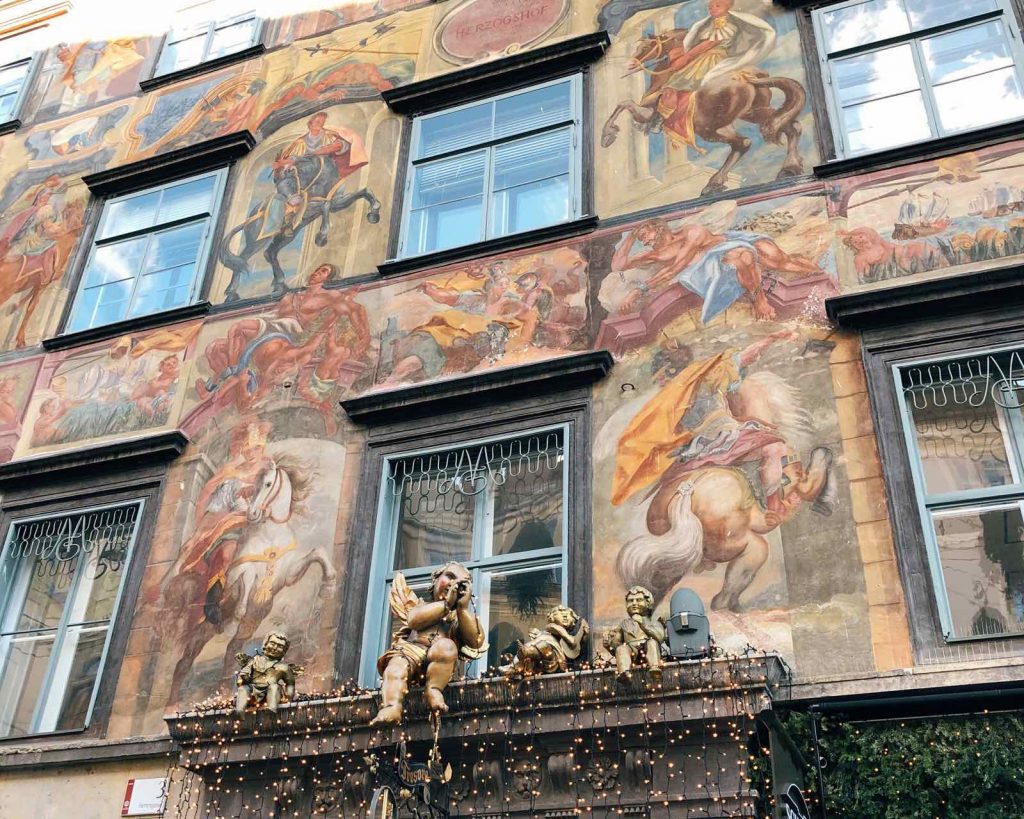 Gemaltes Haus, the Painted House, in the city center

When planning a trip to Graz in the winter holidays, you must be aware that most of the non-Christmas attractions won’t work on Christmas days. They work throughout the Advent, with regular working time, so just be careful with the dates around Christmas.

The Advent starts in the last week of November and works until lunchtime on 24 December. Some of the Christmas markets were already closed on the morning of 24 December. Also worth noting is the fact that 24 and 25 are one of the biggest holidays here, so nothing is working on those days.

We knew that most of the attractions in Graz will not be available during our Christmas stay in 2019, so it was all good. We came on 23 December, which happened to be a Monday, thus no museums were working. Separately, the state rooms in one of the most iconic sites, Schloss Eggenberg, are closed from October to Easter. Still, we came to enjoy the Christmas magic and took the most out of the city! 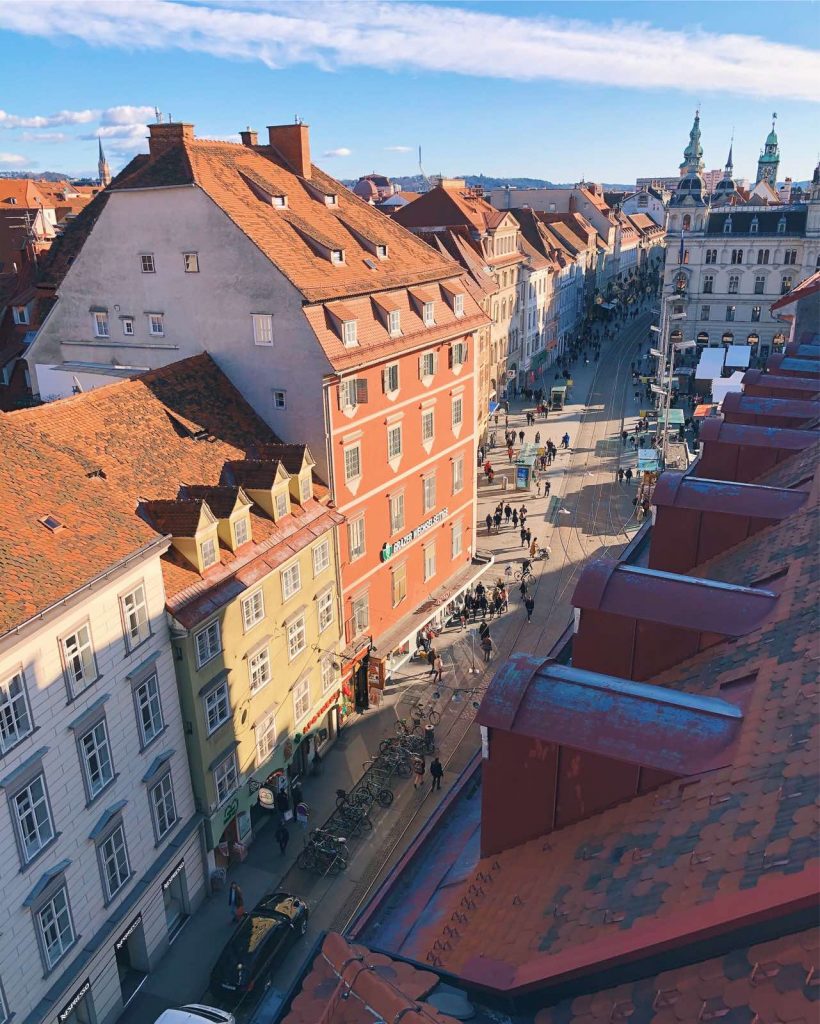 Wishing you a sunny stay in Graz! Ours was awesome ; )

In 2020 the Christmas markets in Graz will work between 20 November and 24 December. Wait for the detailed info here in spring 2020.

So, planning a trip to Graz or other places in Austria? Let me know if you need more info!