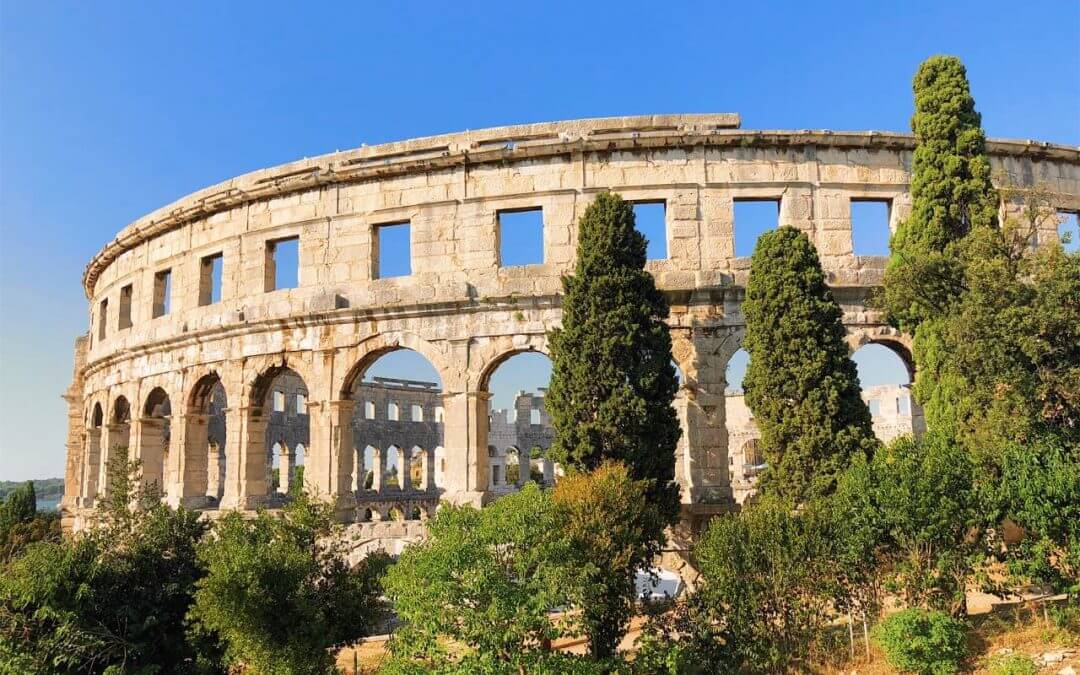 Pula is a Croatian coastal city located in the most northern and western part of the country, Istria, and close to Slovenia and Italy. It is the eight biggest city in Croatia with about 60 000 inhabitants. Pula is famous for its wonderfully preserved Roman amphitheater, Pula Arena, which is one of the six largest surviving Roman arenas in the world.

Similar to Rovinj and most of the Istrian region, Pula has been part of Yugoslavia and then Croatia only after World War II. Before that it was an Italian city between 1918 and 1947, a French and then Austrian city between 1797 and 1918, and Italian again dating back to the 13th century.

Indeed, Pula feels very much Mediterranean and Italian. Being a bigger city, Pula has its big boulevards and one can feel the big city planning here. On the other hand, the old town has its narrow stone paved streets with two-three floor colorful buildings, that are just so charming!

Pula is also surrounded by sea and full of awesome beaches, so it is guaranteed you’ll have plenty to see and do while in this city!

Some boats in Pula

Pula has an airport, so it is easy to get here. The other airports in Croatia are in Zagreb, Rijeka, Osijek, Zadar, Split, Dubrovnik and at the islands of Brač and Lošinj.

On the charming streets of Pula

The amphitheater in Pula is the absolute must-see of the city. This amazing Roman monument dates back from 1 century AD and is the only remaining such construction to have its four side towers with all three Roman architectural orders entirely preserved.

Since it is quite big, you can take a good look of it from outside. I found it difficult to catch all of the amphitheater in one image. You won’t be able to do so unless you’re a bit away from it. 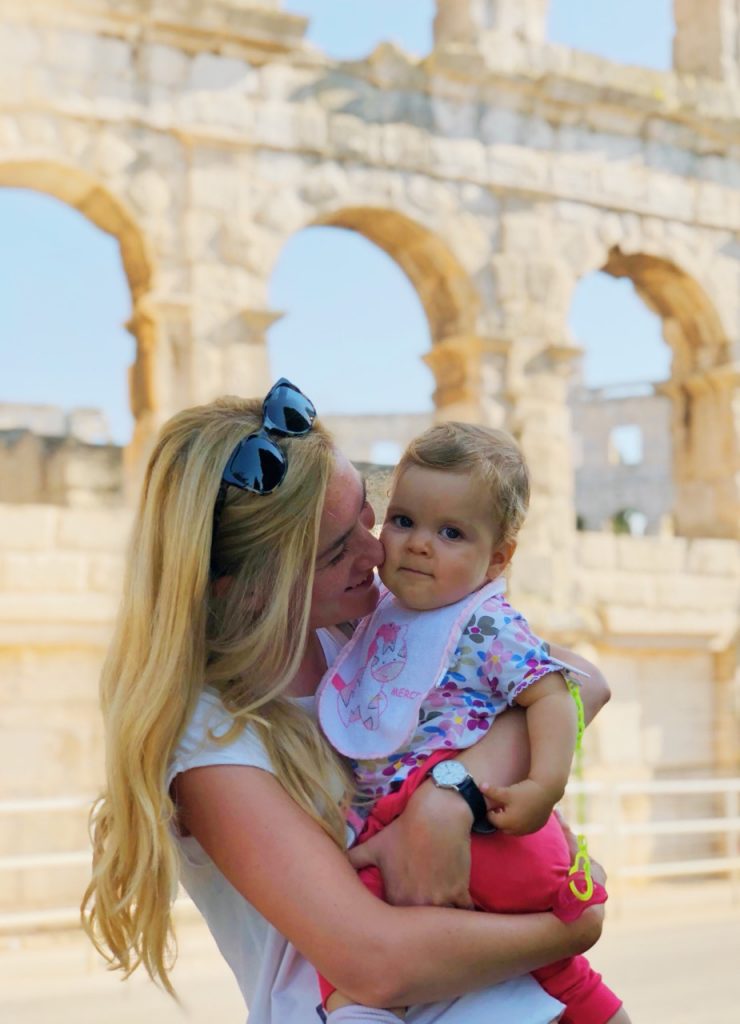 Me and Anna before entering the Pula Arena

Don’t skip getting inside the arena, because it is definitely worth visiting. In a way it is similar to visiting the Colosseum in Rome. Still, this arena is smaller and not so full of tourists. Nevertheless, it is inevitable to start imagining what would it be to travel back in time and see a show here. You’ll be able to walk around, sit on the original banks and enjoy the place. 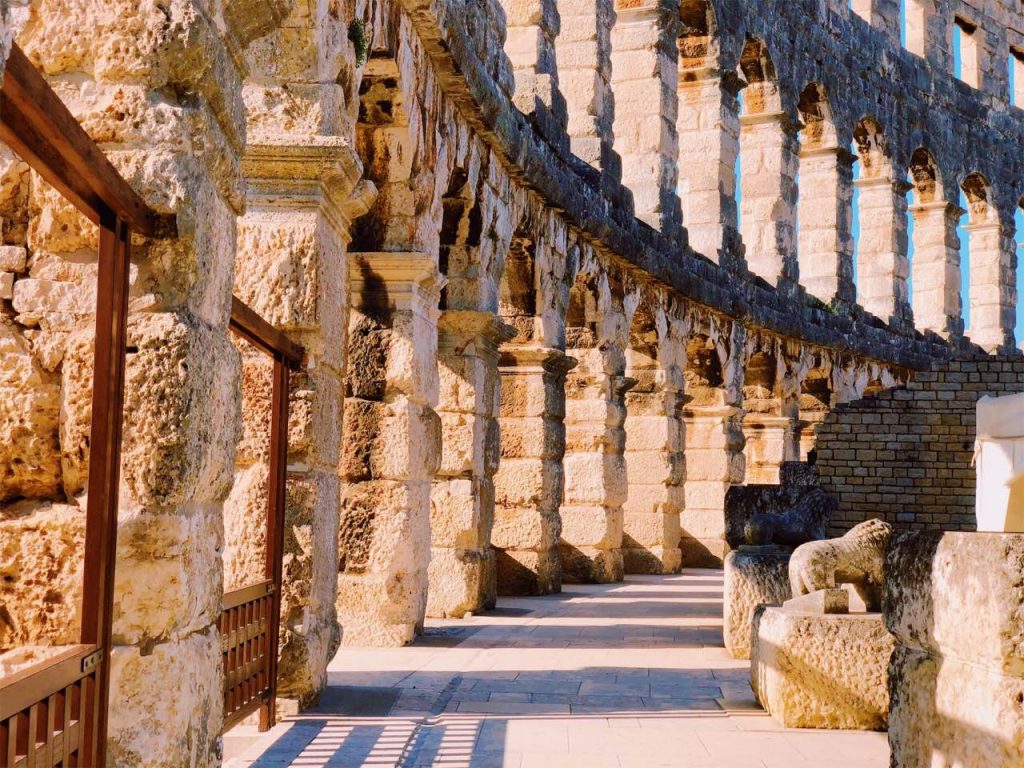 Inside Pula Arena, the must-see of Pula

There is an underground area with a permanent exhibition of Roman findings and crafts items. It is cool to check it out. Especially if you are visiting during the high season in the summer when you’ll need a place to escape from the hot sun. My family and I visited at the end of September 2018 and it was still pretty hot! 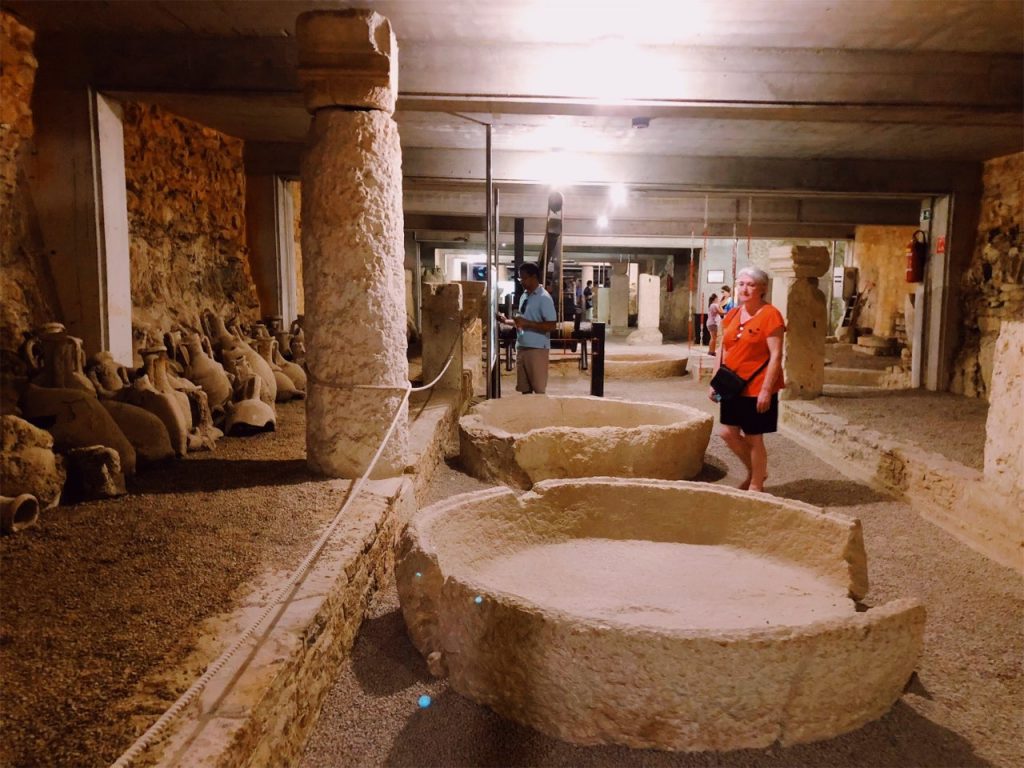 Underground at the Pula Arena

Pula Arena dress up: You can dress like gladiators and take pics at the arena. This looks a lot of fun if you’re traveling with kids.

Another cool thing about the arena is that it still serves as a stage for different occasions – concerts, theater and cinema festivals, etc. Make sure you check in advance if there are events taking place here, because the location is hot and tickets are usually gone pretty fast. 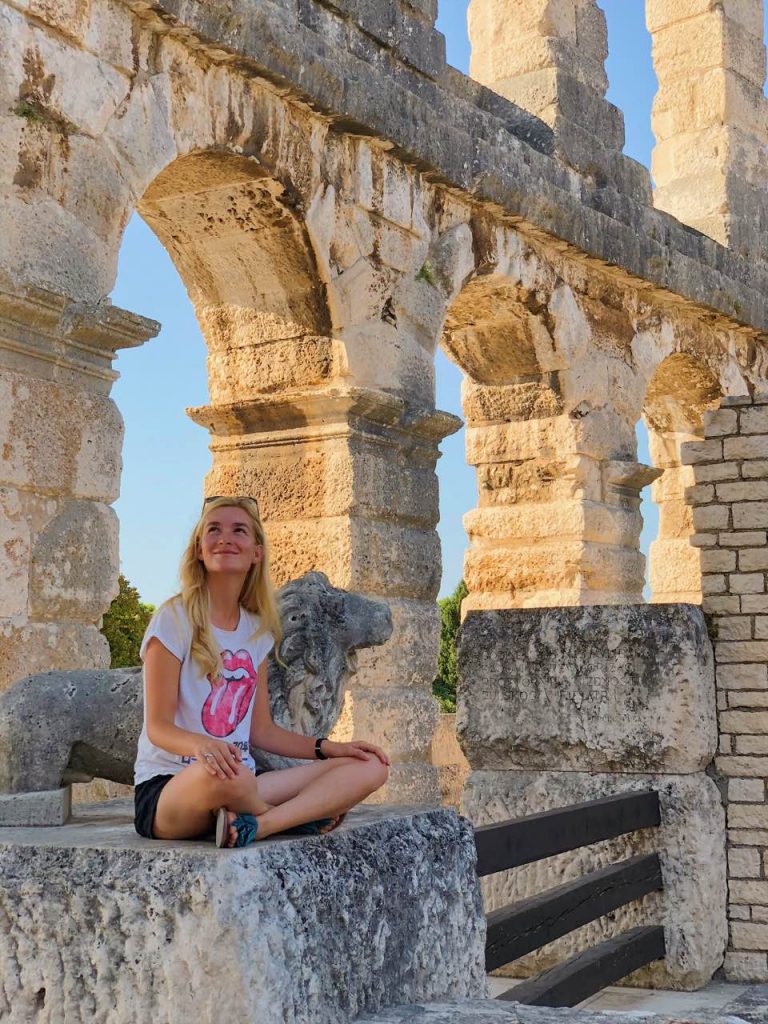 Me enjoying the beautiful Pula Arena

The entrance fee is HRK 50 (EUR 6.7, USD 7.7) as of September 2018. There are discounts for students and the elderly – they pay half the price. Audio guides are paid separately. 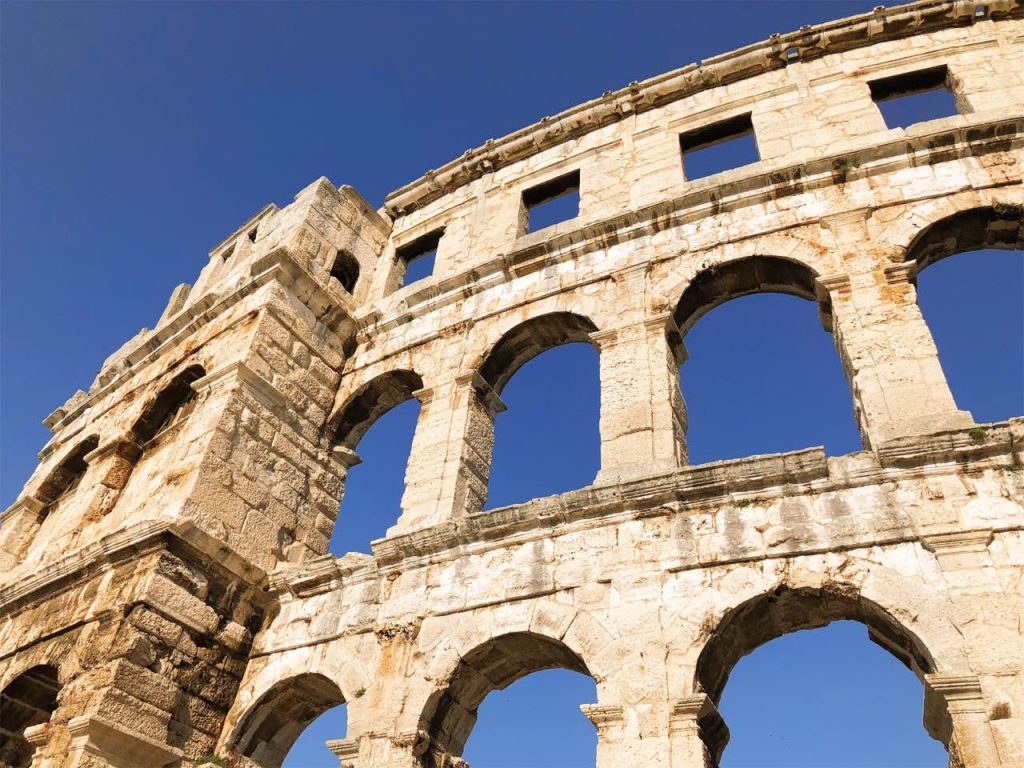 Another great shot at Pula Arena

Pula Arena is not the only ancient Roman building around. On the contrary, Pula is full of ancient ruins, archeological sites and well-preserved Roman structures. Make sure you follow the brown tourist signs in the city center to see all of them. Even if you don’t, you’ll stumble upon lots of ancient stuff if only walking around. 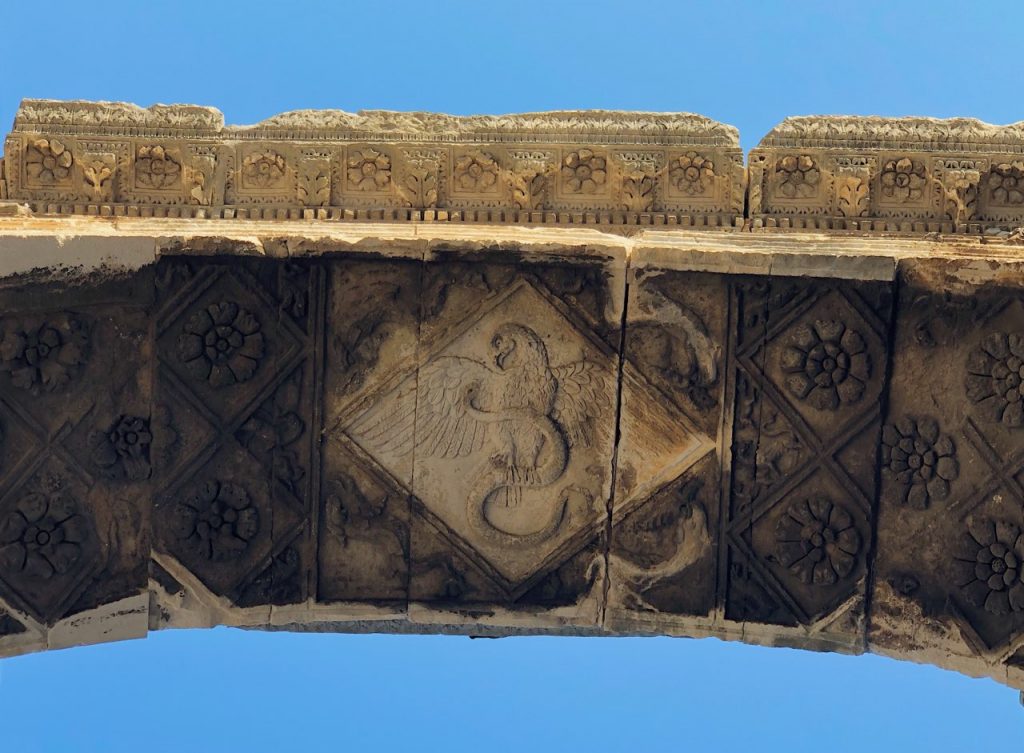 See what is under the Arch of the Sergii

The Arch of the Sergii is a triumphal arch built in the 1st-century AD. It is located at the start of the old town area in Pula if you are coming from the arena. 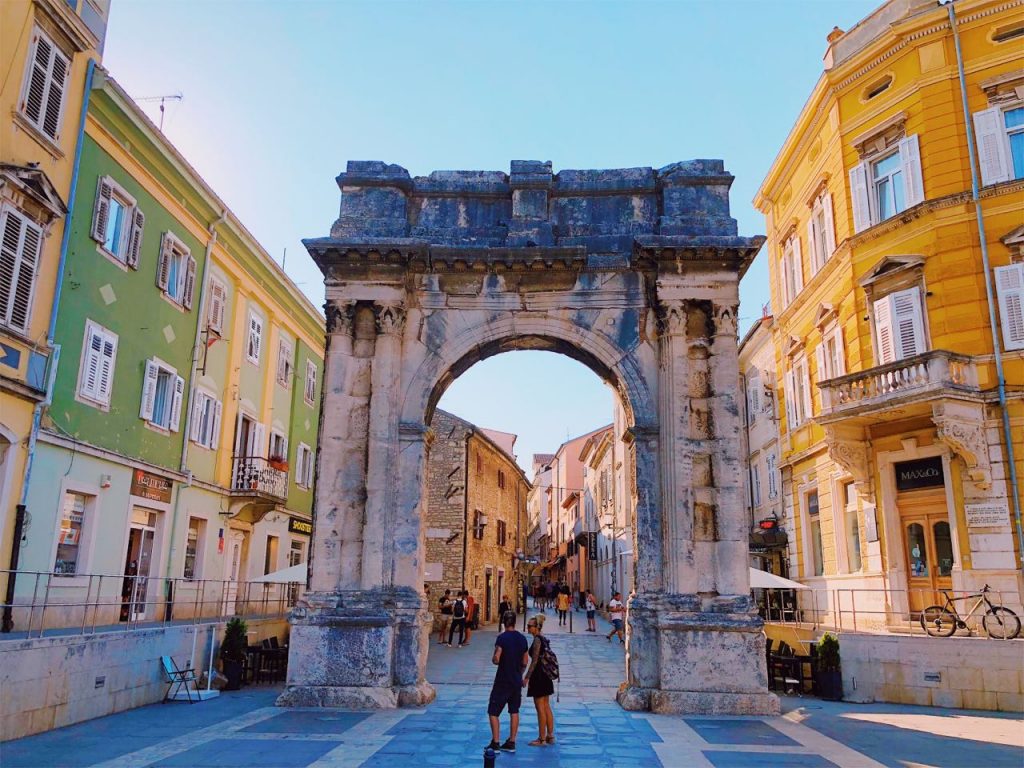 The beautiful Arch of the Sergii in Pula

Another well-preserved Roman building is the temple of Augustus, also dating back from the 1st century AD. This one was built on the so-called Forum in the city center. 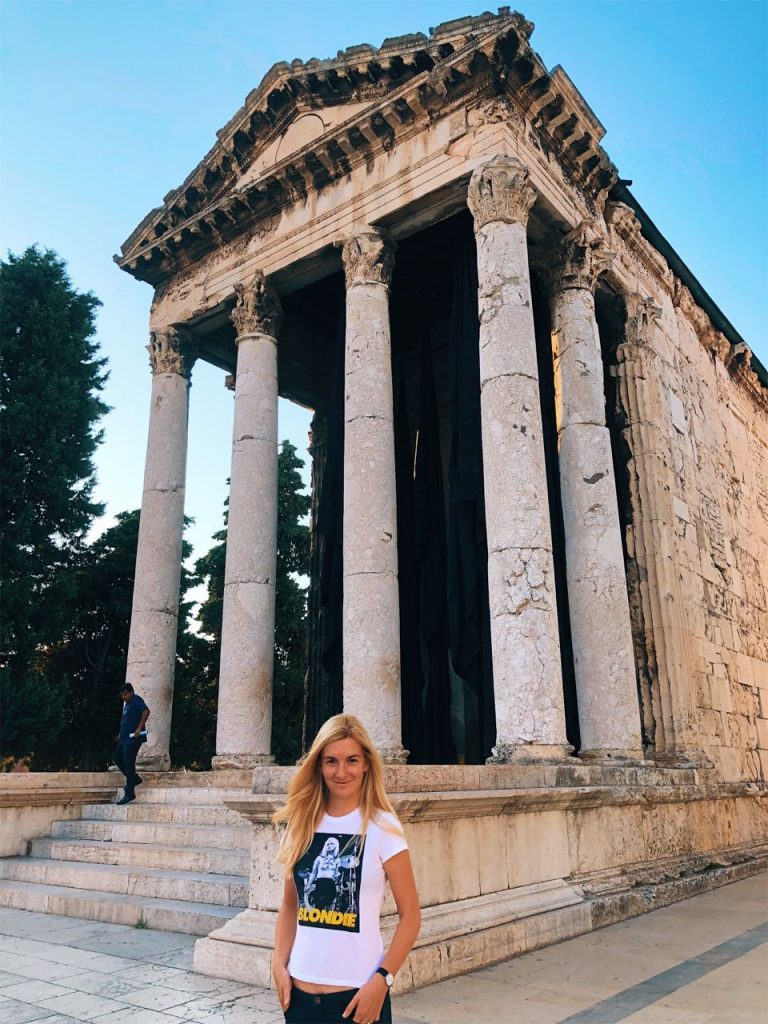 A not so notable site, but one that I liked a lot is the Agrippina’s house. Even though it is in the city center and there are signs leading to it, it is still a bit of a hidden gem. It is located in the backyard of a modern-day building and surrounded by other buildings. This archeological site is not as impressive as the story behind it. 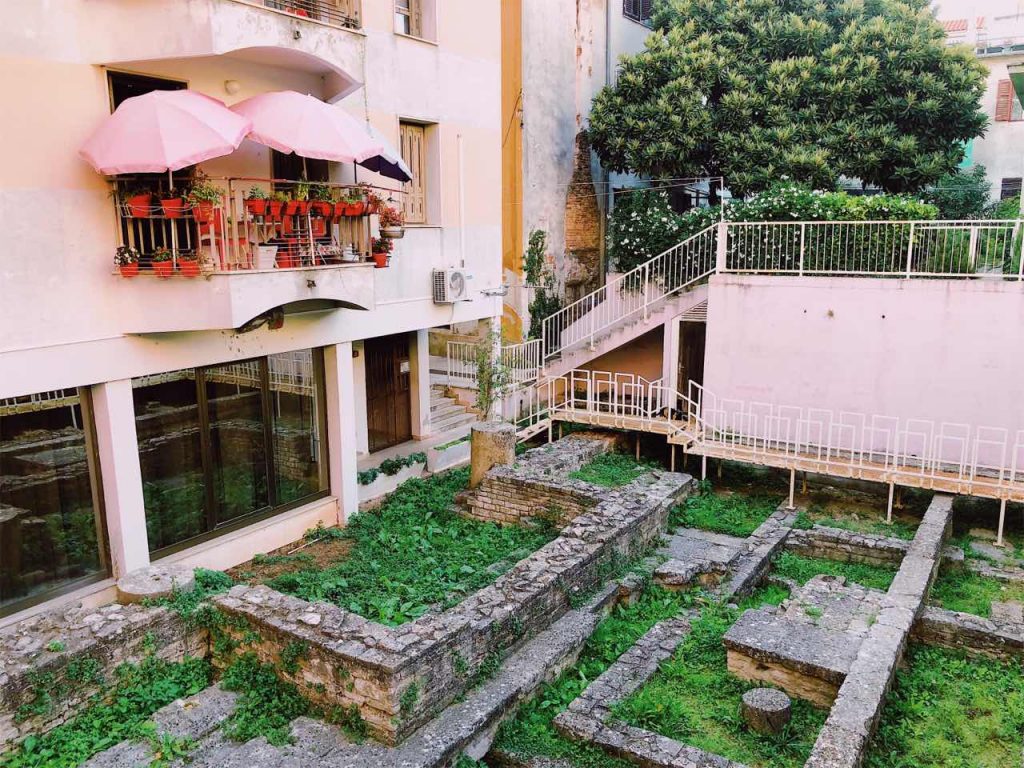 Agrippina’s house in Pula is hidden behind modern buildings

It is at this house that archeologists found a marble bust, supposedly of Agrippina Minor. She was Caligula’s sister, wife of emperor Claudius and mother of the notorious Nero. Once again, the ruins of Agrippina’s house are not impressive, but it is cool to see how they fit in the nowadays city landscape and get to know the whole story. 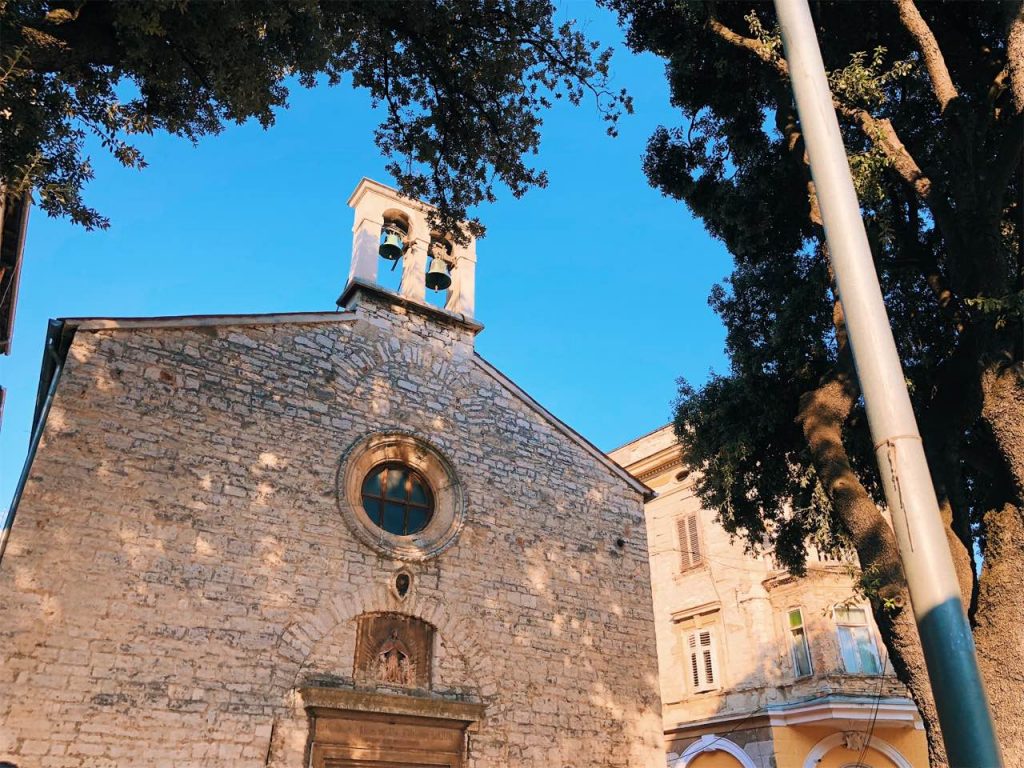 A small church in the old town of Pula

Visitors can also enjoy some beautiful churches in the city of Pula, including the Pula Cathedral at the main square. Keep eyes wide open for the smaller and charming churches across the city. 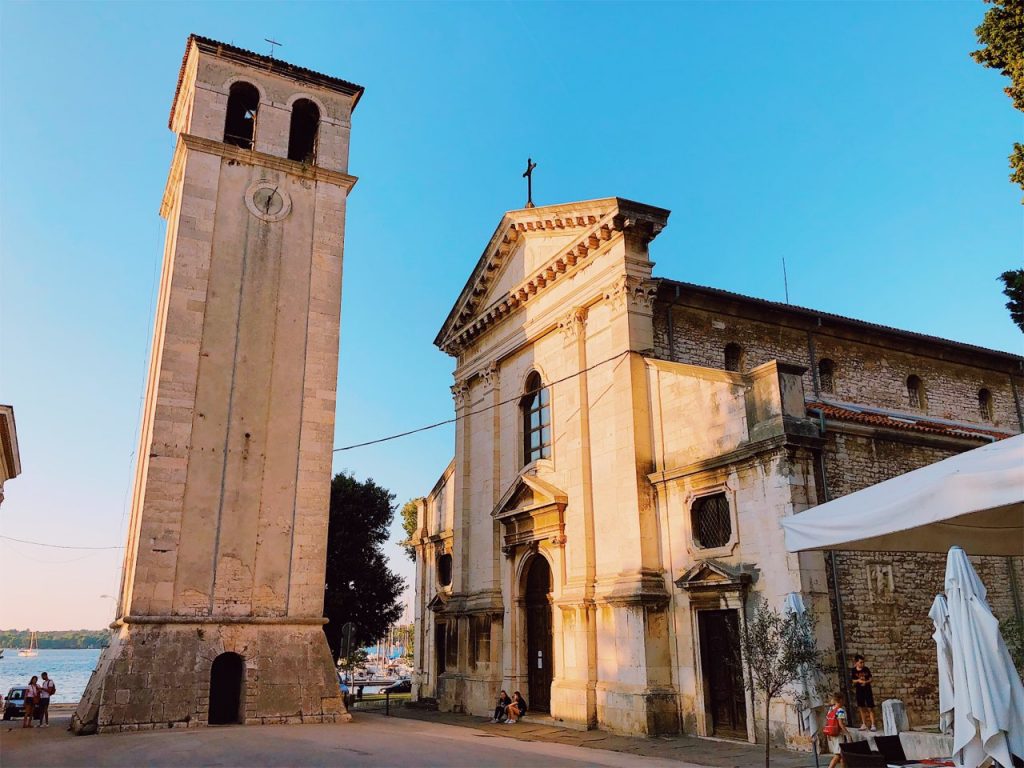 This is how Pula Cathedral looks in the afternoon

Irish writer James Joyce lived in Pula for half a year, from October 1904 to March 1905. Joyce worked here as a teacher. He then moved to Trieste, where he stayed for ten years. If you’re a fan, you can sit down and have a drink with him in Pula or just take a pic like me 😉 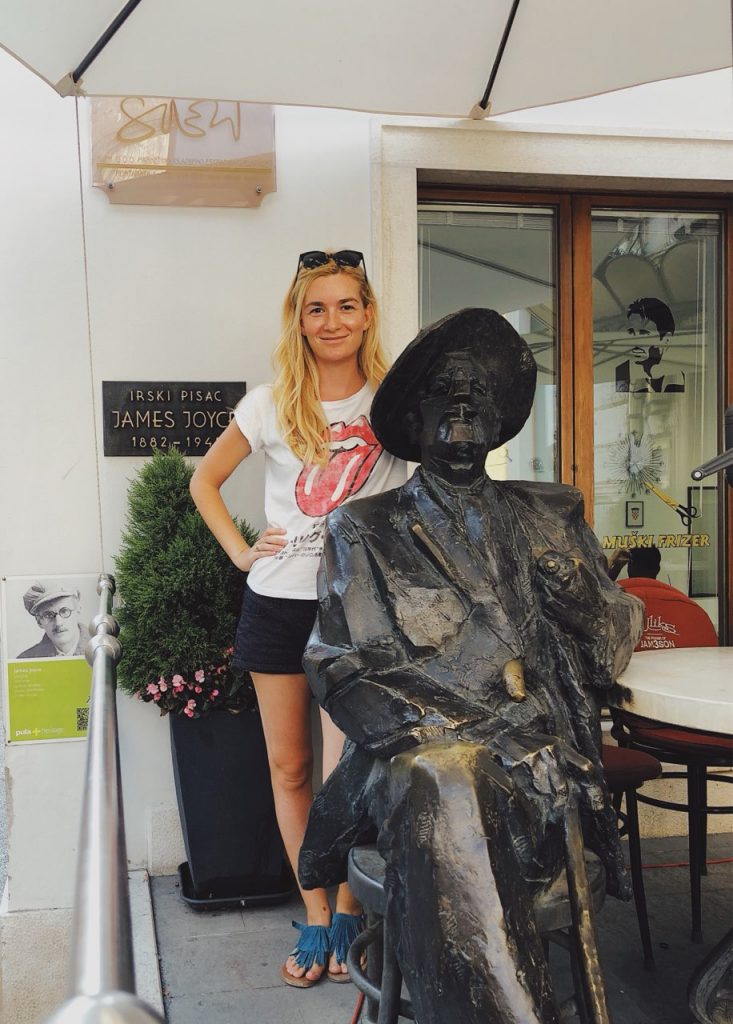 I read several of James Joyce works and loved them!

Pula offers many food opportunities at many different places around the city. Of course, most of the restaurants are situated in the city center. Eating at a nice place in the old town is the best option, if you ask me.

There are plenty of charming restaurants and the prices are quite alright. You’ll probably spend around the same or a bit less than you would in Italy. I said this many times and I will once again. Western Europeans and Americans would probably find it cheap, while Eastern Europeans won’t feel as comfortable with the prices. 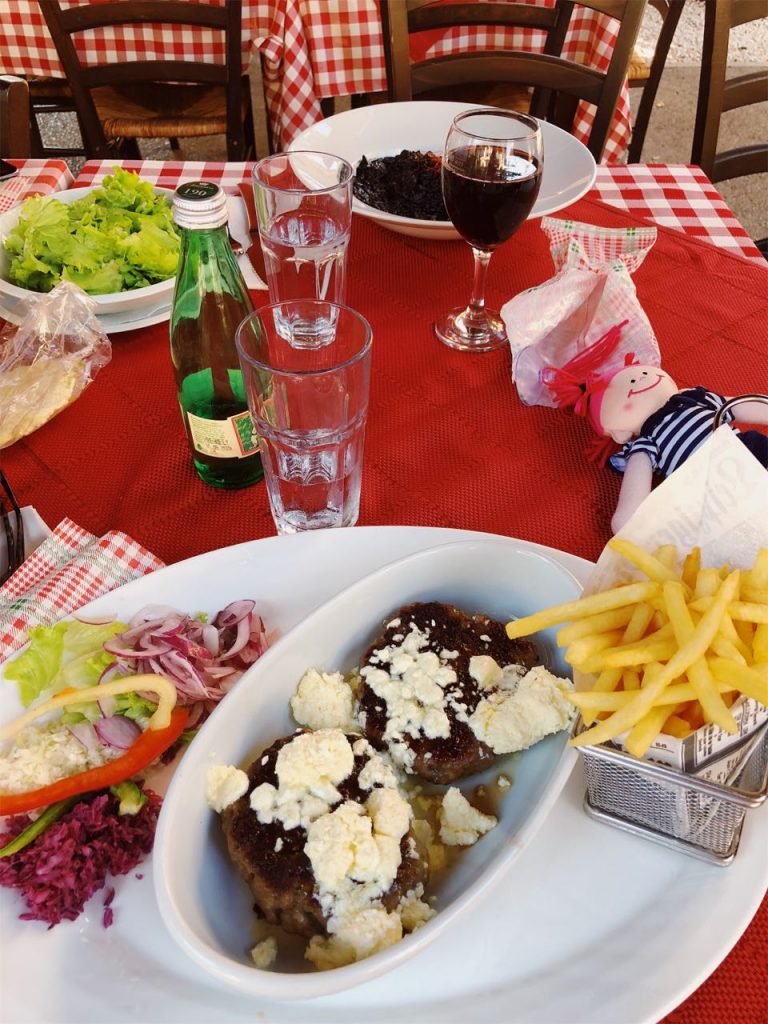 Some meals in Pula

In Pula there are many authentic retro bars that work for several decades and offer great bar experience. 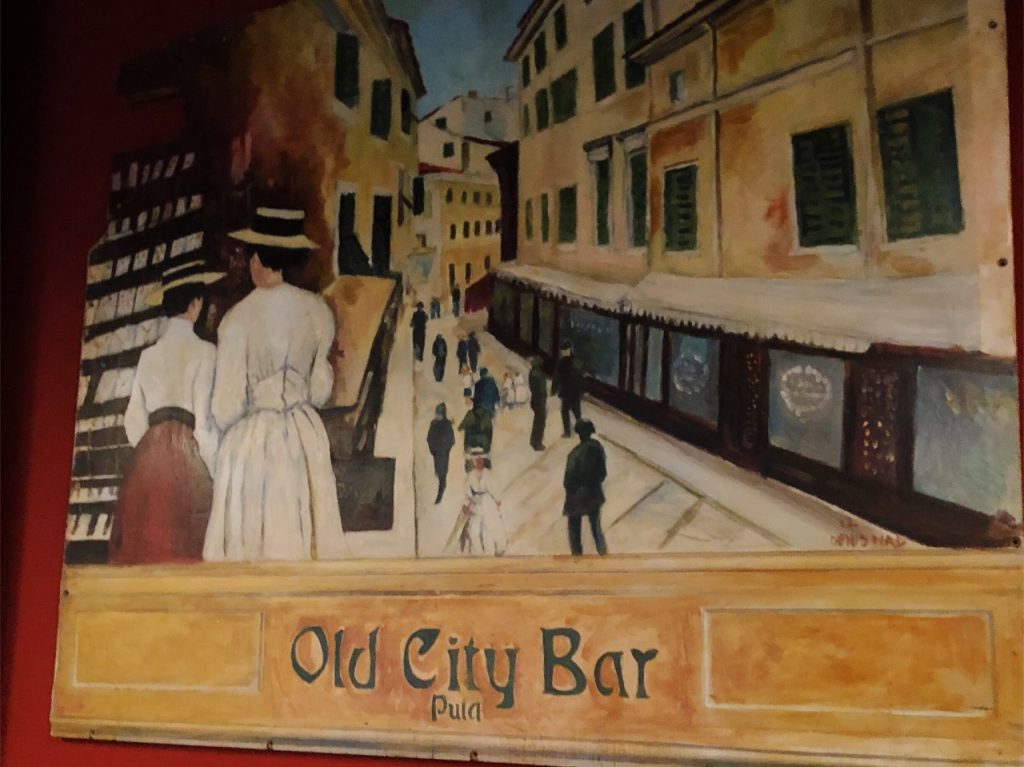 As many Mediterranean cities, Pula has some hills and climbing up, as well as stone paved narrow streets that are not the best place to wander with a baby stroller. Still, bigger part of the city is flat and easily accessible even for the heaviest strollers.

The old town of Pula is quite save for kids. Most of the streets are pedestrian, with no traffic or vehicles whatsoever. You will not worry about your children being save. 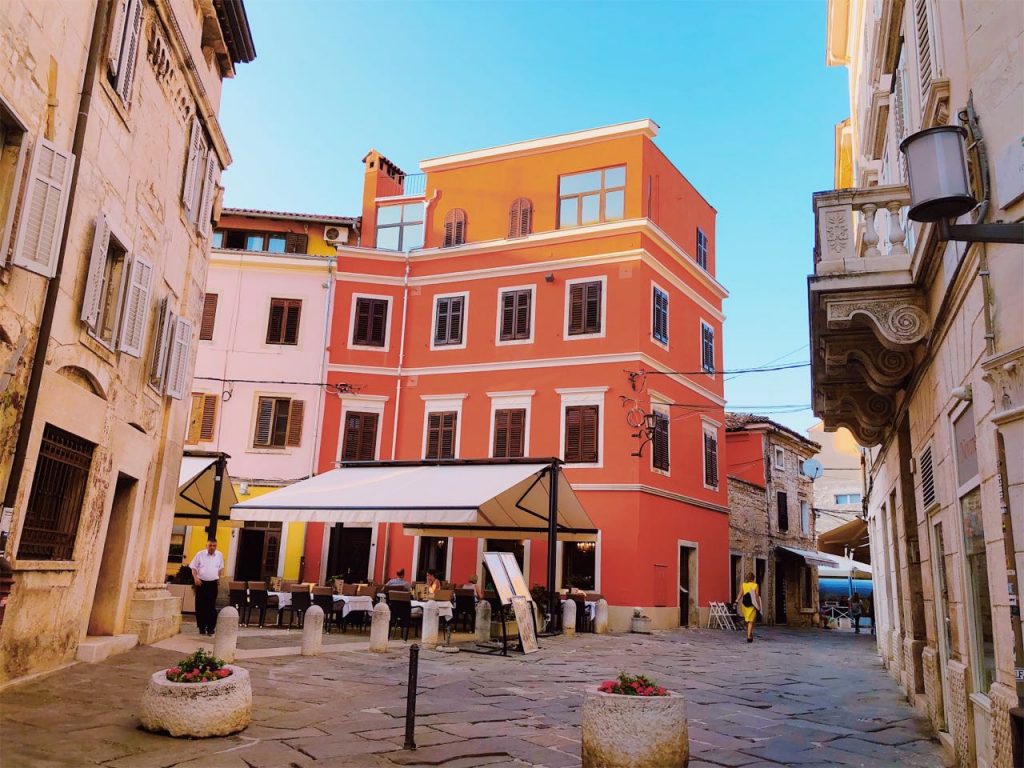 At the city center of Pula

Kids would love seeing the Arena and walking in the old part of the town with its colorful buildings and charming stores. Also, let’s not forget going to the beach and swimming. Pula’s beaches are mainly pebble beaches that are suitable for kids.

All in all, I consider Pula and the region a nice place for traveling with kids.

Did I mention how charming Pula is? 🙂

Are you planning a trip to Pula? Do you need more info? Let me know in the comments below. 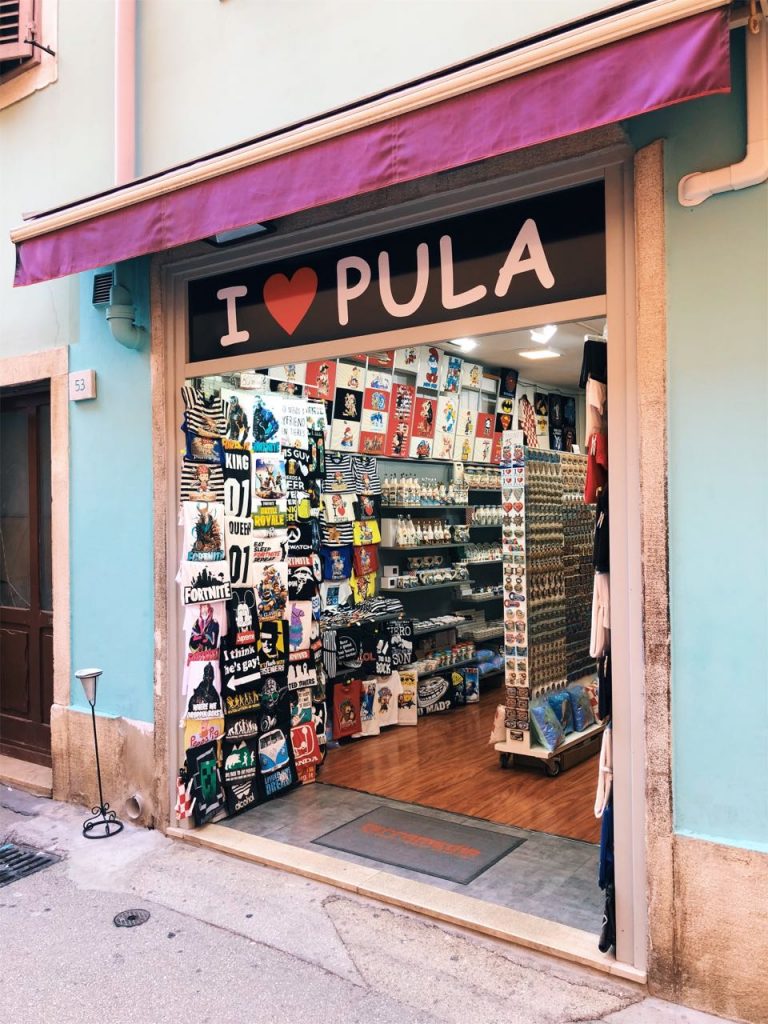