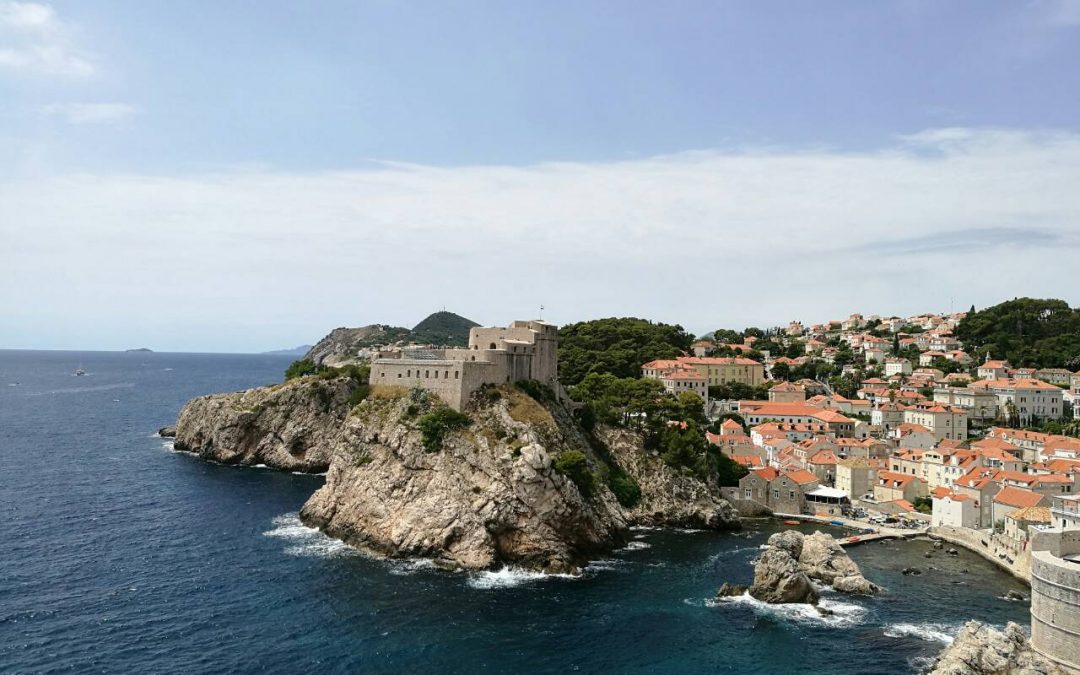 Aaaa, Dubrovnik! The most popular tourist destination in Croatia and the Mediterranean is definitely worth visiting! It is very charming, vibrant and full of Game of Thrones stuff. Unfortunately, it is also full of tourists, the parking is impossible and the prices can be ridiculous.

Located at the very south part of Dalmatia, Dubrovnik has a rich medieval history, which can be used for basis for many Hollywood movies. It’s no coincidence that Game of Thrones use its old town and city walls for its décor.

The city went by two names for many centuries. Both Dubrovnik and Ragusa were used, but Dubrovnik dominated in the last two centuries and is now the official name. Back in 1979 Dubrovnik was included the UNESCO list of World Heritage Sites, as many other Croatian attractions.

Even though the place suffered lots of damage around 1991 in the Yugoslav Wars, the restoration works managed to return its glory.

Stradun is the main street in the old town of Dubrovnik. Once you enter the old city, you’ll find yourself on Stradun. Soon after you’ll be wandering through its many narrow and typically Dalmatian intersections, which became home to numerous enchanting restaurants, craft and souvenir stores. 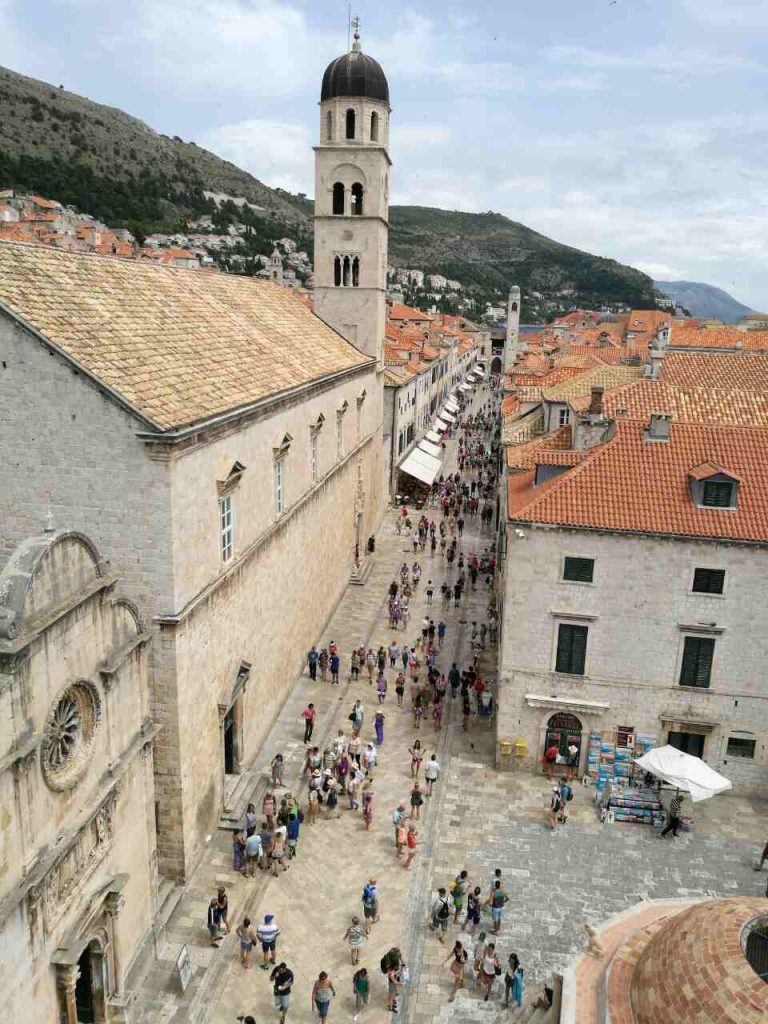 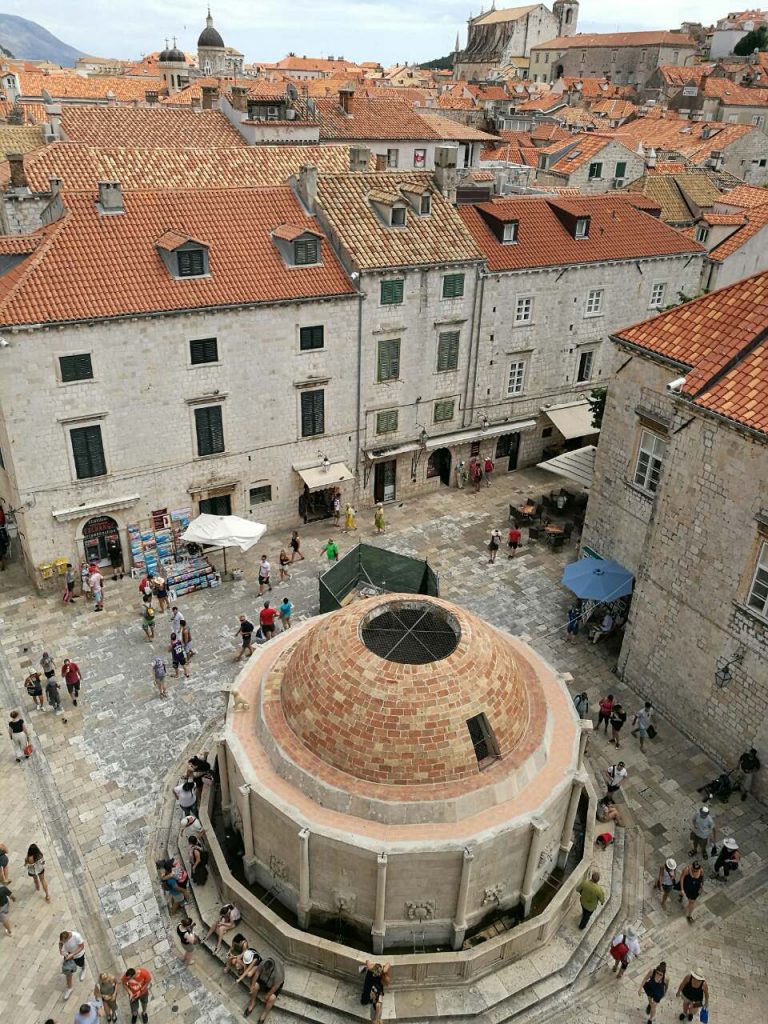 The city walls of Dubrovnik

Even though I was pregnant in the sixth month when in Dubrovik, I did not shy away from visiting the city walls. They are an absolute must-see here. You’ll need to climb several stairs and once you’re up there, you’ll walk under the sun and see the old town from above and the sea. The city walls give plenty of photo opportunities. Most of the pictures in this post are taken from there. There’s little to no shadow, so it’s a must to have your hat on and some sun protection products if visiting during the summer. 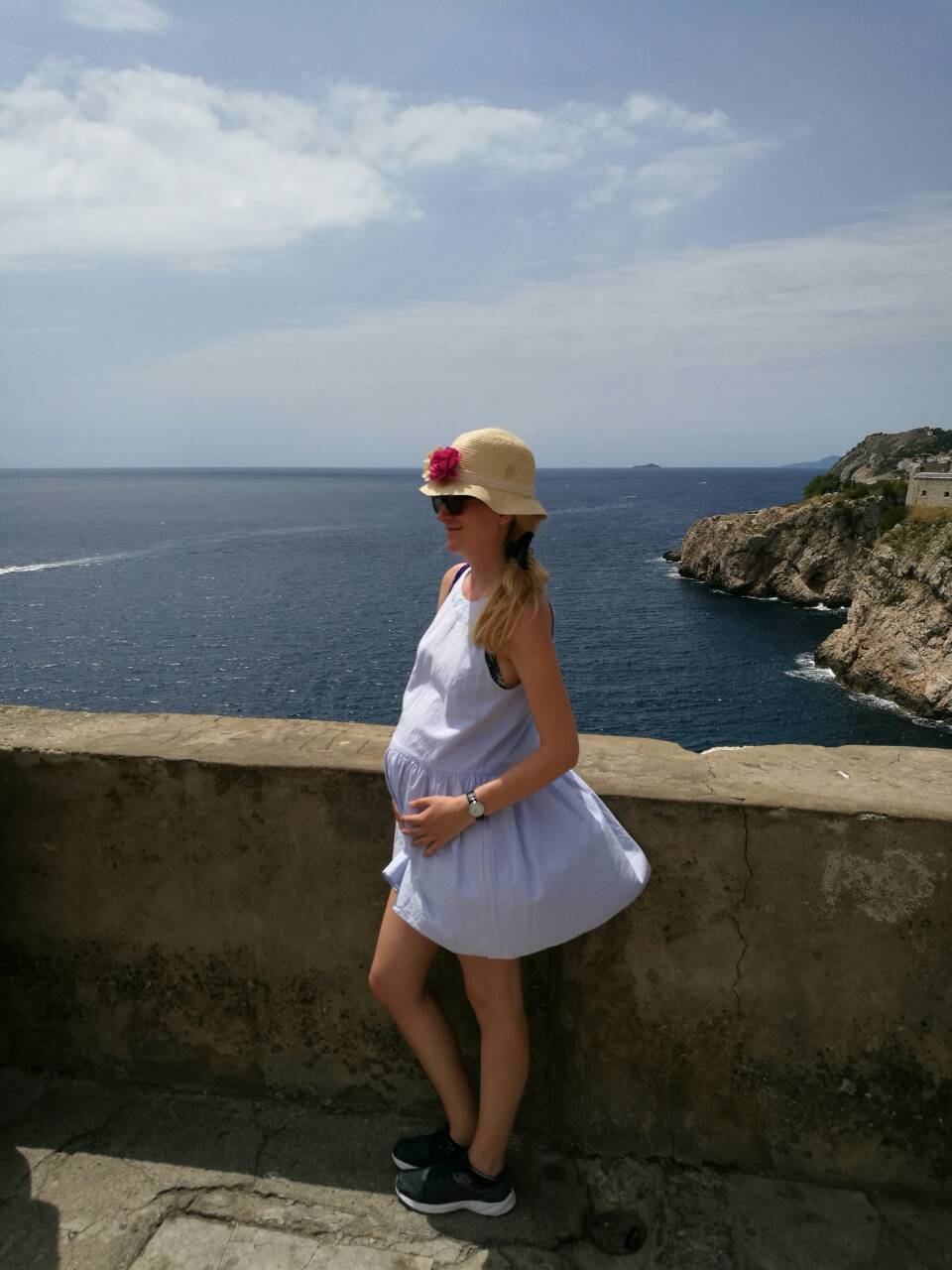 Me enjoying the view from the city walls of Dubrovnik 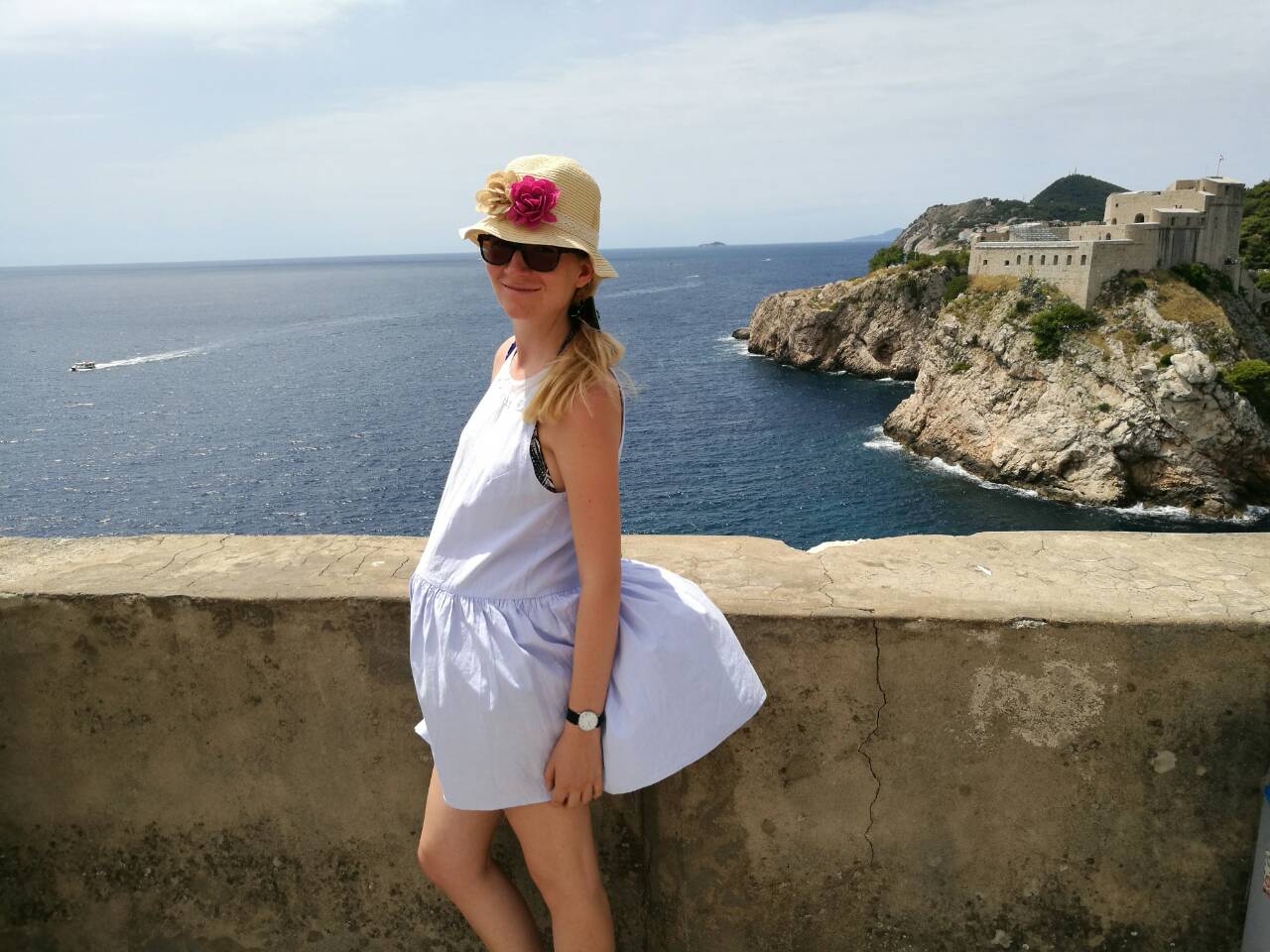 Be sure you wear a hat for the city walls in Dubrovnik! There is no shadow. 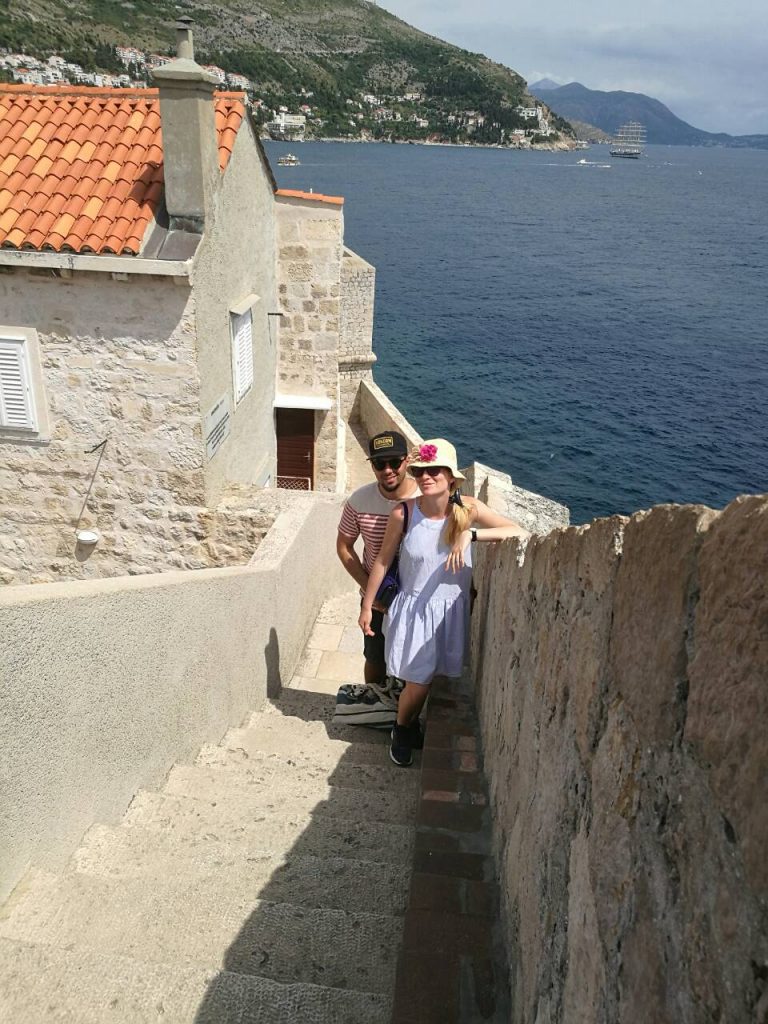 My husband and I at the city walls of Dubrovnik

If you like taking cable cars, make sure you check out the one close to the old town’s walls. The go and return ticket is EUR 20 per person and you’ll get to see the old town from above. The views are amazing. We did not manage to get a ride during the day. Instead we went with car at the evening and loved it! Plus, we did not pay the tax that way.

We were travelling with a vehicle, so if you’re with your own car or rent-a-car you can try going up the hill and check out the view. There were lots of turns going up and the road got really narrow at some point, so have that in mind as well. There’s also a really nice restaurant at the hill, again looking up the city. 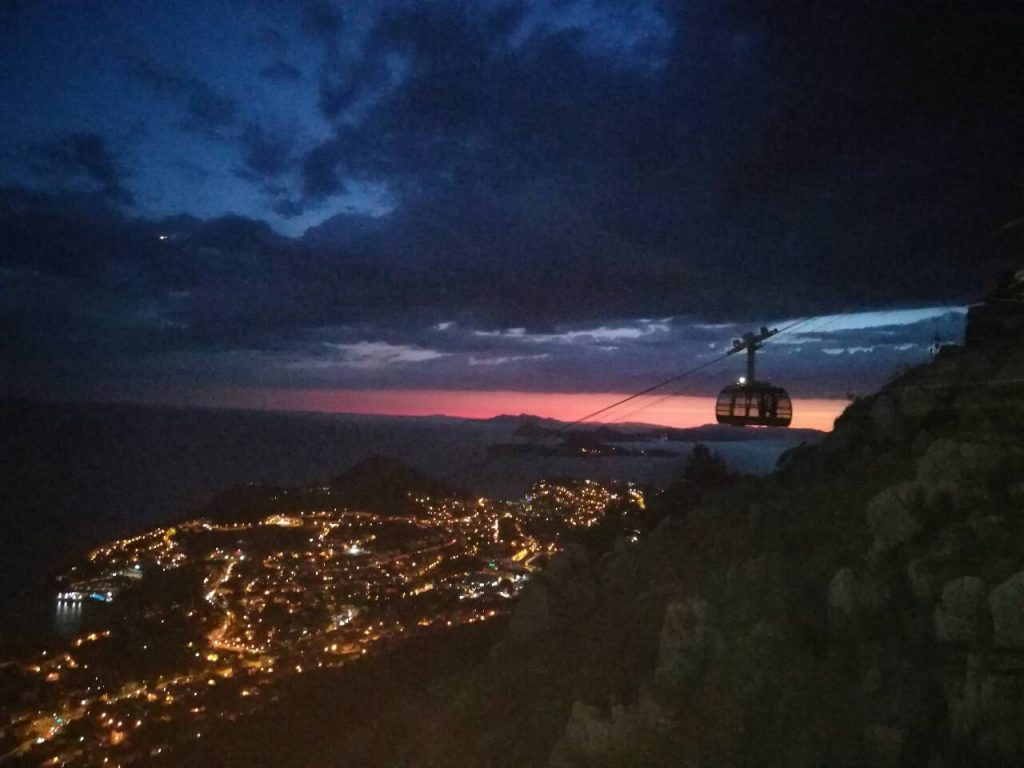 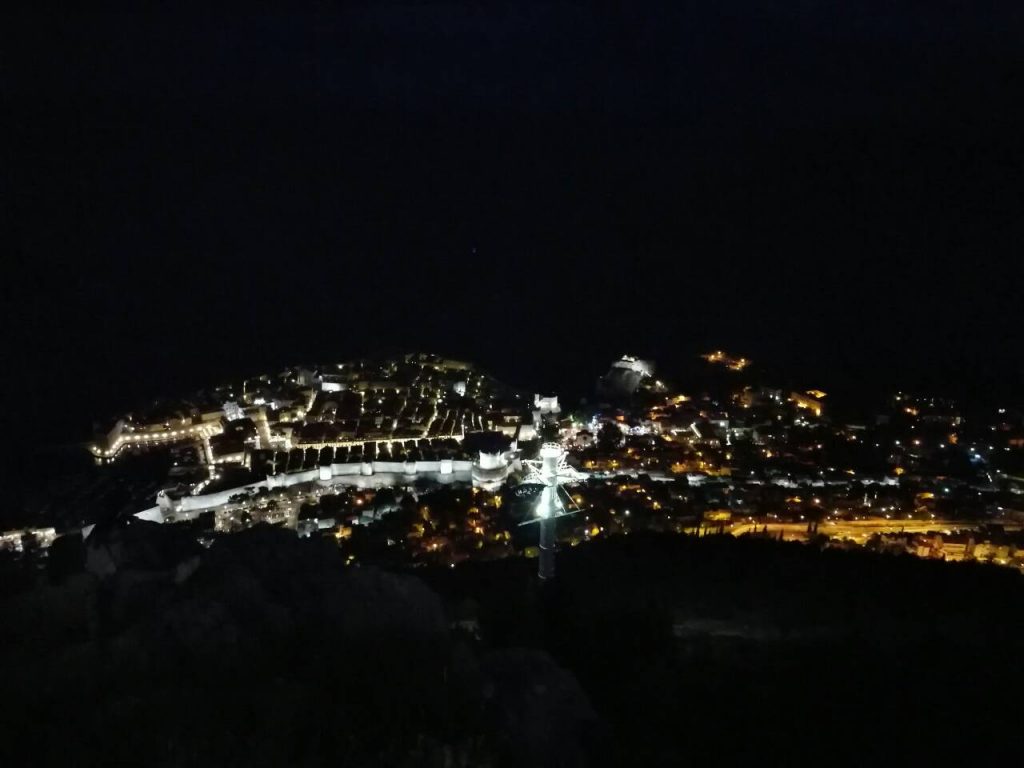 I started this post by saying the prices in Dubrovnik are pretty high. Well, they are definitely high for Eastern Europeans, but for Croatians as well. Ice-cream is double the price compared to other tourist cities in the country and same goes for almost everything.

I assume Americans or Western Europeans would not notice this as much (or maybe not at all). Still, keep in mind that you’ll be leaving fortunes for food and drinks. All my friends complained about the prices after returning from Dubrovnik.

Parking is limited in Dubrovnik, so make sure you book a place to stay with parking available! Otherwise you can spend literally hours to find a spot and even when you do, you’ll probably need to pay a fortune to actually leave your vehicle there. Paid parking options are paid throughout the day and night. In other Dalmatian cities the parking spots on the streets are usually paid between 7:00 AM and 11:00 PM, but not here.

Everybody comes to Dubrovnik in the summer, so the city is overcrowded, which can be annoying. If you are coming in the summer, be sure to start your days in the city as early as possible in order to spend the sunniest parts of the day indoors or somehow protected from the sun. The heat will make you constantly thirsty, tired and grumpy. The temperature goes up to 38/40 °C or around 100°F.

Many locals do not go outside between 12:00 AM and 5:00 PM as a rule, except when returning from work. The standard working hours in lots of Dalmatian cities are from 7:00 AM to 3:00 PM. This is their version of the 9-to-5 working scheme. Don’t worry though as the tourist attractions, cafes and restaurants are open throughout the day.

It is always best to visit avoiding the busiest season. 15 July to 15 August is the heart of the summer and this is when most people visit Dubrovnik. Coming in June or late August/September would save you stumbling upon crowds of tourists, plus the sun won’t be that exhausting. 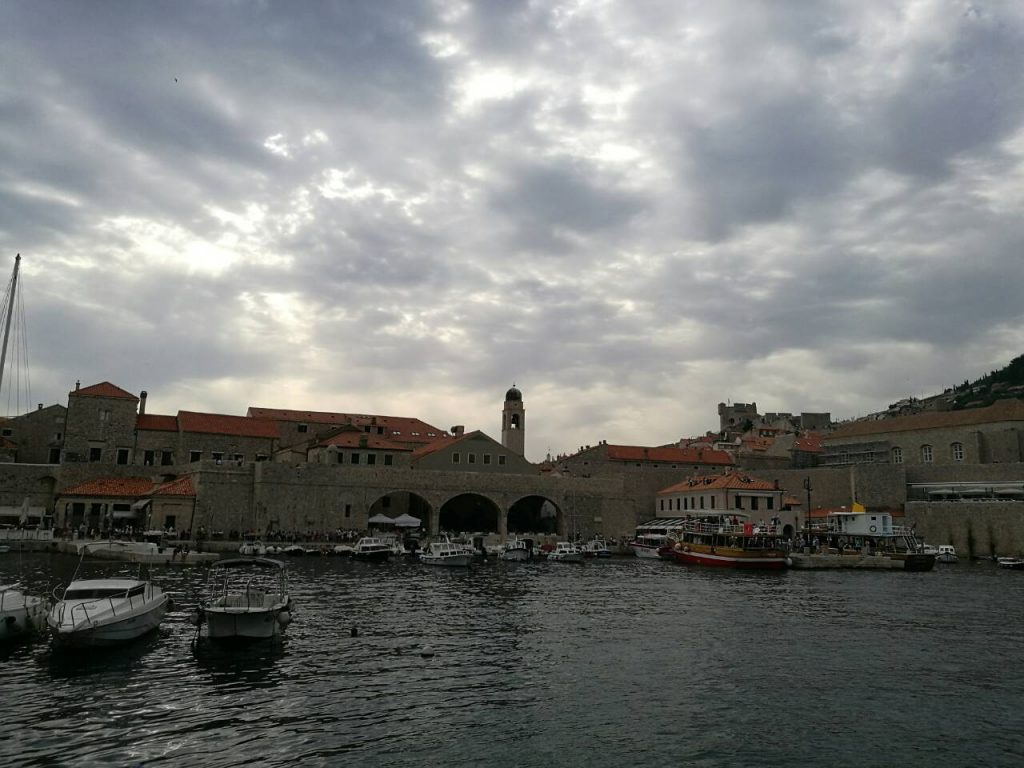 The harbor at the old town of Dubrovnik 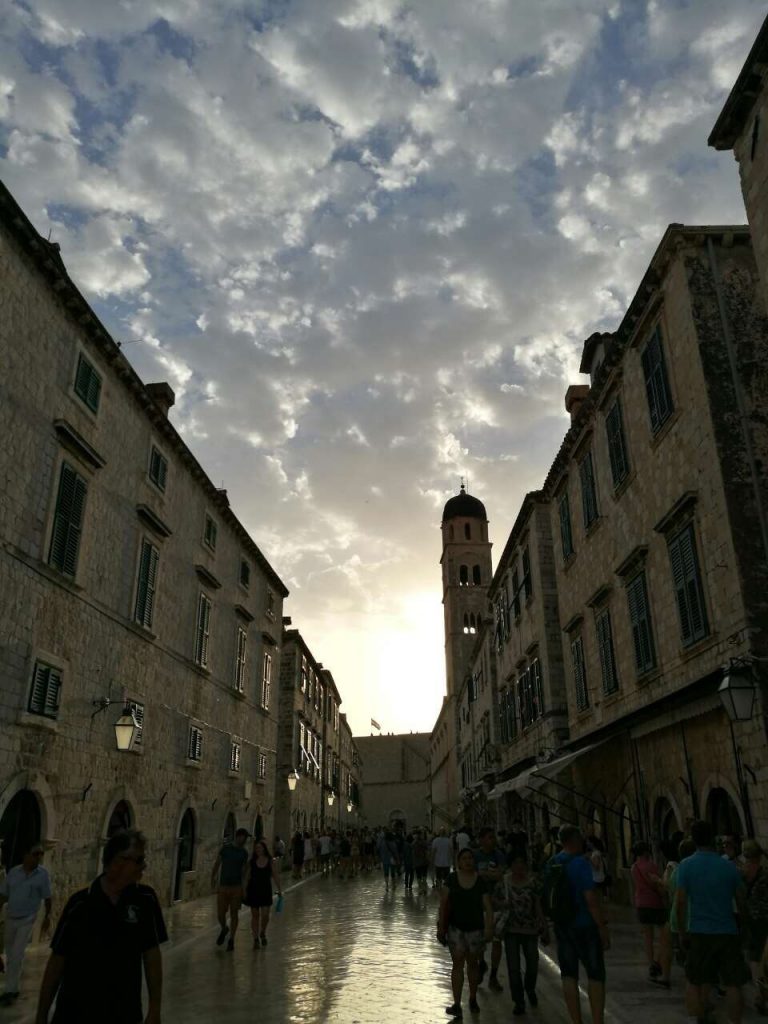 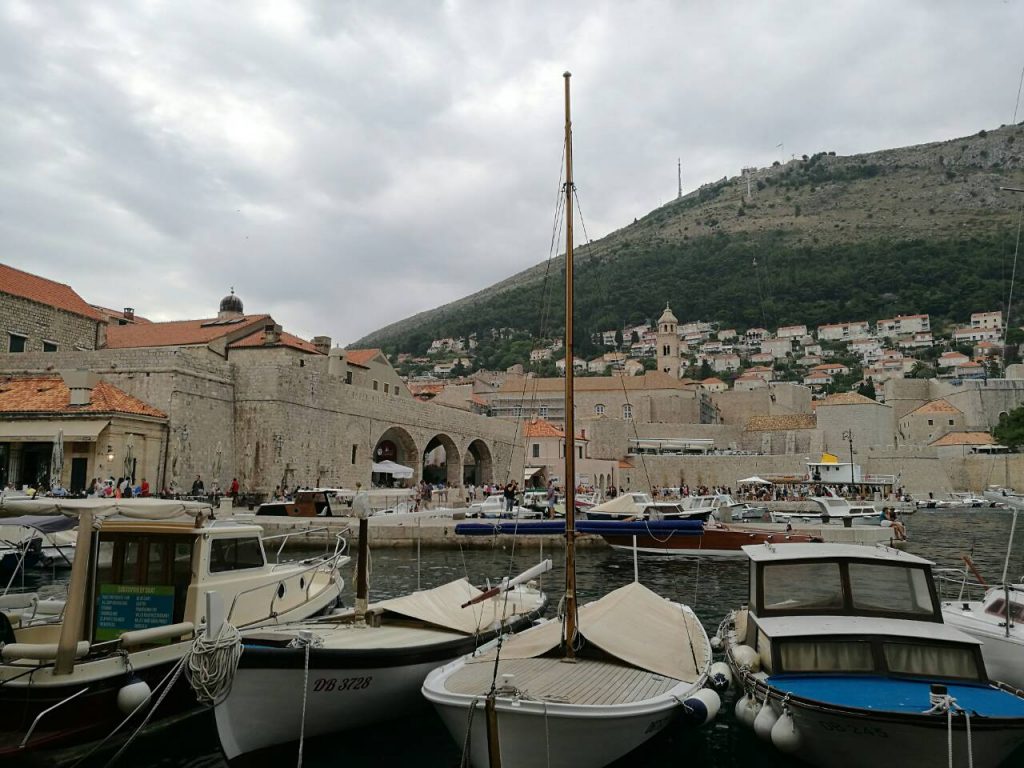 The harbor at the old town of Dubrovnik

How long to stay in Dubrovnik?

One or two days would be enough to explore the city, but if you are really passionate about it – make it a three-day trip. You must consider the summer heat when planning as there is a chance you cannot spent the whole day outdoors.

Dubrovnik is well connected to many European cities by air. Find out more info about the flights to Dubrovnik in 2019 in my separate post about frying to Croatia.

Connections to other cities

Most people plan staying in Dubrovnik for a night or two and then continue their journey to Kotor, Budva and Bar in Montenegro (Crna Gora), Sarajevo in Bosnia and Hercegovina (Bosna i Hercegovina) or up north in Croatia, going to Makarska, Brac (Brač), Hvar, Split, etc. Another trip that is not so popular, but I am sure it is a great idea, is taking the ferry to Bari in Italy. I will most probably do this one when going to Dubrovnik the next time.

Travelling pregnant or with kids

Considering the climate conditions in the summer and the walking in the old town and the city walls, Dubrovnik is not the best choice for visiting when pregnant. I decided to do so, because my husband and I postponed going there for several years and because I knew I am not traveling for some time after I give birth taking in mind how far away it is from where we usually reside in both Bulgaria and Croatia.

Dubrovnik is not the best choice for visiting when pregnant, because of the heat in the summer.

If you visit with kids, you should balance the sightseeing with time on the beach or more child-friendly activities. A family brought their two kids on the city walls and at some point their three-four-year-old daughter refused to walk anymore, so the dad had to beg her to continue. Their son didn’t look happy either. Still, this can happen anytime at any location – home or abroad, so be sure you plan a balanced trip that satisfies both you and your little ones. 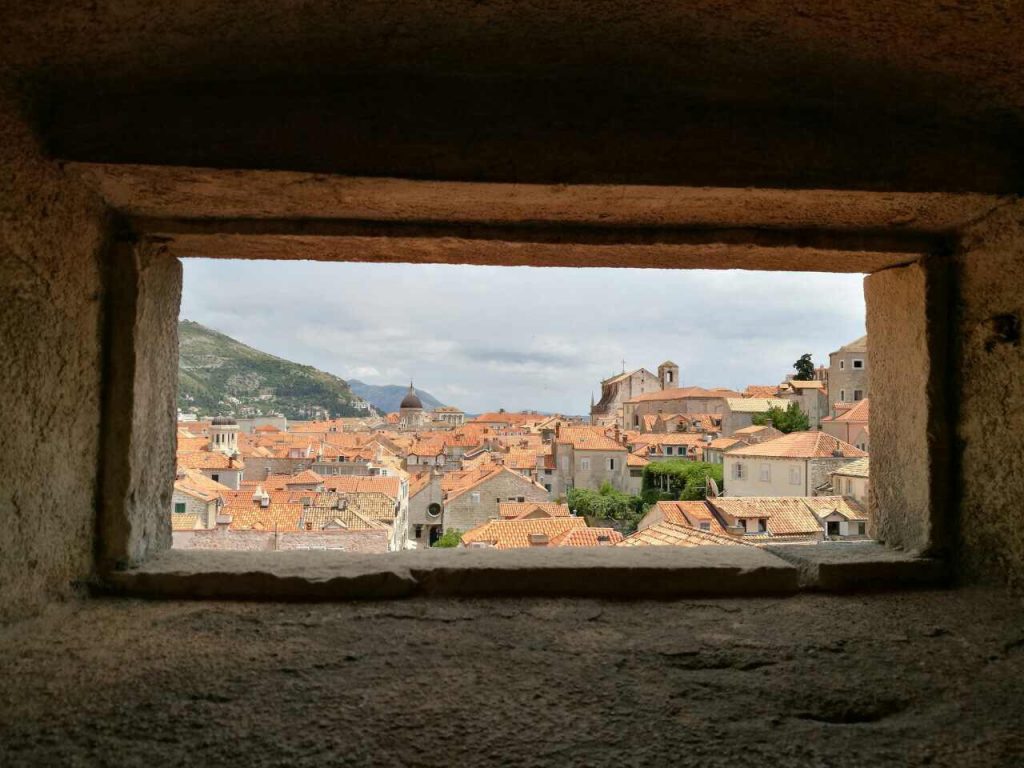 A view from the city walls of Dubrovnik

The paintings of Romana Milutin Fabris

One of the things that impressed me a lot were the paintings of Romana Milutin Fabris. She is an artist born in Dubrovnik, whose main subject of art is the city itself. Her gallery is at one of the narrow streets in the old town, Marojice Kaboge №5, where you can enjoy some of her works and make a purchase if this is what you’re looking for.

It seemed that Romana herself is rarely at the gallery, but the lady that works there was really kind and told us the whole story of Romana – how she became Miss Yugoslavia as a young woman, how she learnt from fellow colleague Kokoschka as a beginning artist and how she became a famous painter. For those of you who love art – make sure you check out the gallery.

Even though the gallery is supposed to be open at certain hours, the woman that works there has her own agenda and is not always available. She even leaves some paintings outside when she closes the gallery for a while. We saw the gallery and wanted in, but had to return a couple of times to catch it opened. When we told the woman what happened she explained that she needed a walk the first time and a pancake – the second time (!).

Being the pearl on the Mediterranean, Dubrovnik has its advantages and disadvantages, but it is all part of the experience this beautiful historic city provides. Dubrovnik is definitely a place to put on your list! 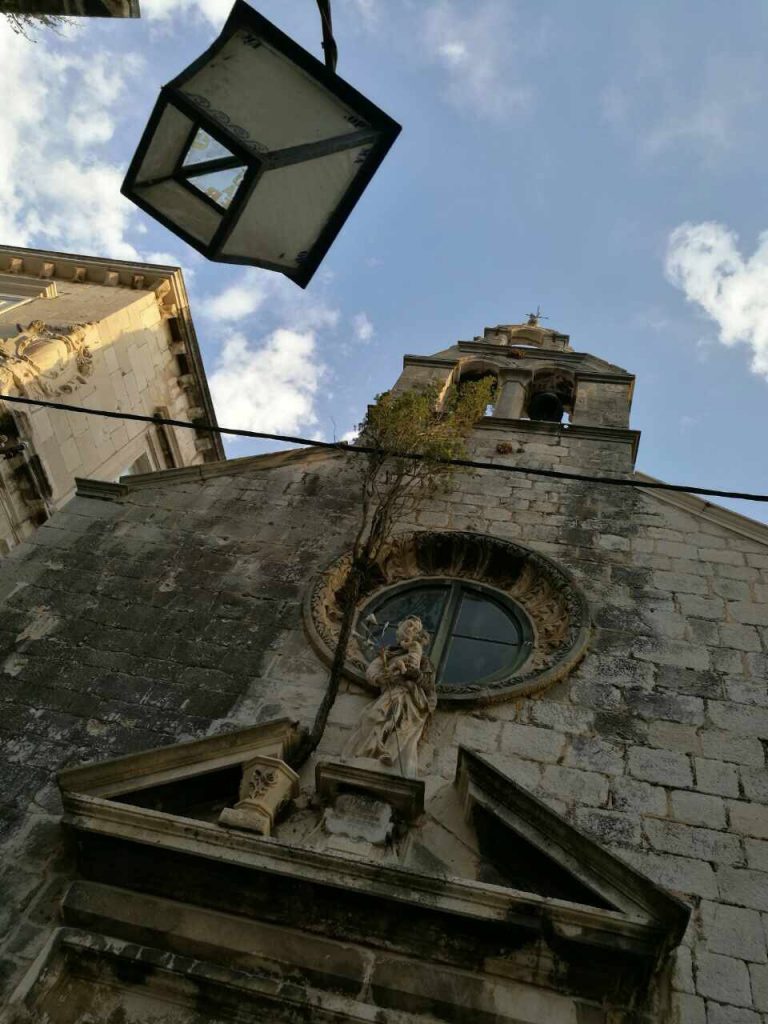 On the streets of Dubrovnik

Check out my tips to survive Dubrovnik!