Bologna in Italy – old, but young at heart 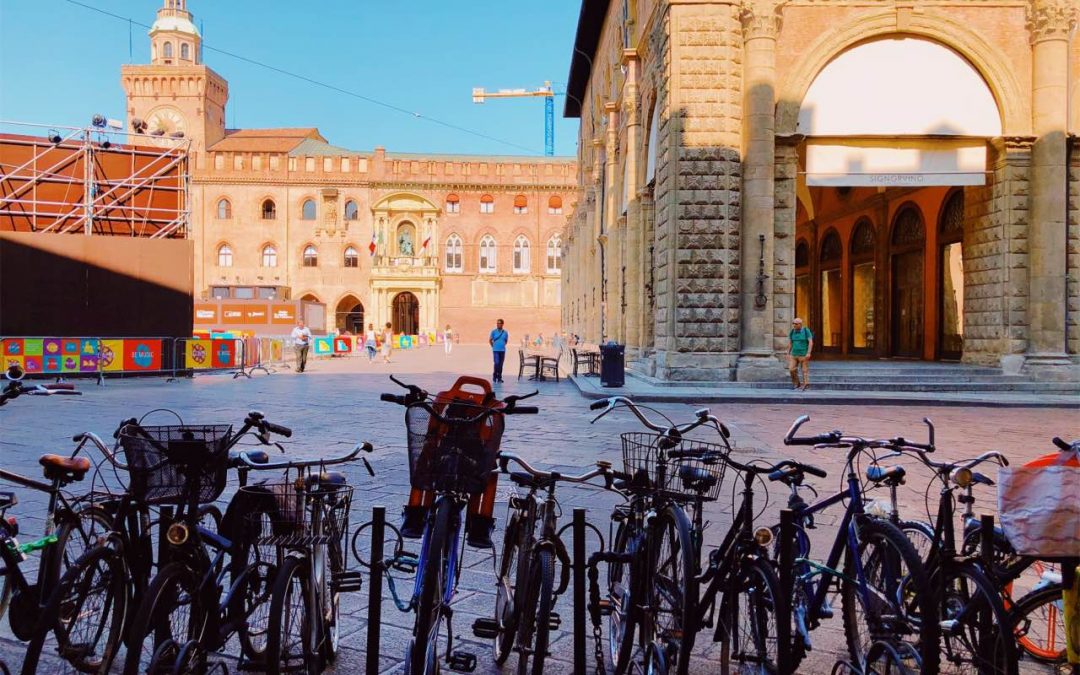 Bologna is the place that impressed me the most during our family trip in Italy in July 2018, which also included Florence and Pisa. I had my eye on Bologna for some time now as WizzAir offers great prices on their tickets from Sofia, Bulgaria, to Bologna for at least several years now. At the end I didn’t fly there. Nevertheless, that got my attention on that amazing destination that I highly recommend to all of you!

For some unknown reason, Bologna is not that popular with tourists as other Italian cities. In my opinion it is because Florence is nearby and it attracts the tourist flow having some features such as the famous Uffizi gallery, Ponte Vecchio and Michelangelo’s David among others.

Bologna comes to me as far more charming compared to Florence because of the less tourists that spare the time to visit the city. The huge amount of people everywhere in Florence was annoying after being in Bologna for three days, enjoying the atmosphere, the cuisine and the amazing old buildings.

The whole city sends out a warm and welcoming vibration. Many buildings are decorated and painted in yellow, orange and red, which adds to the nice warmish feeling one experiences when in Bologna.

Being a student city makes the life in Bologna vibrant, colorful and full of events. The oldest university in Europe is actually located at this very city and was founded in 1088! It strikes me how developed and evolved this city was so many years ago!

In July 2018 there was a cinema festival while we were in Bologna. Many events take place in Bologna all over the year.

Many consider the food in Bologna the best in the country. One of the city’s nicknames is la grassa or the fat one. We took advantage of being in this culinary heaven and drank coffee and ate lunches and dinners like there’s no tomorrow. I had to put together a separate post on the food in Bologna as this one would have gotten pretty long. 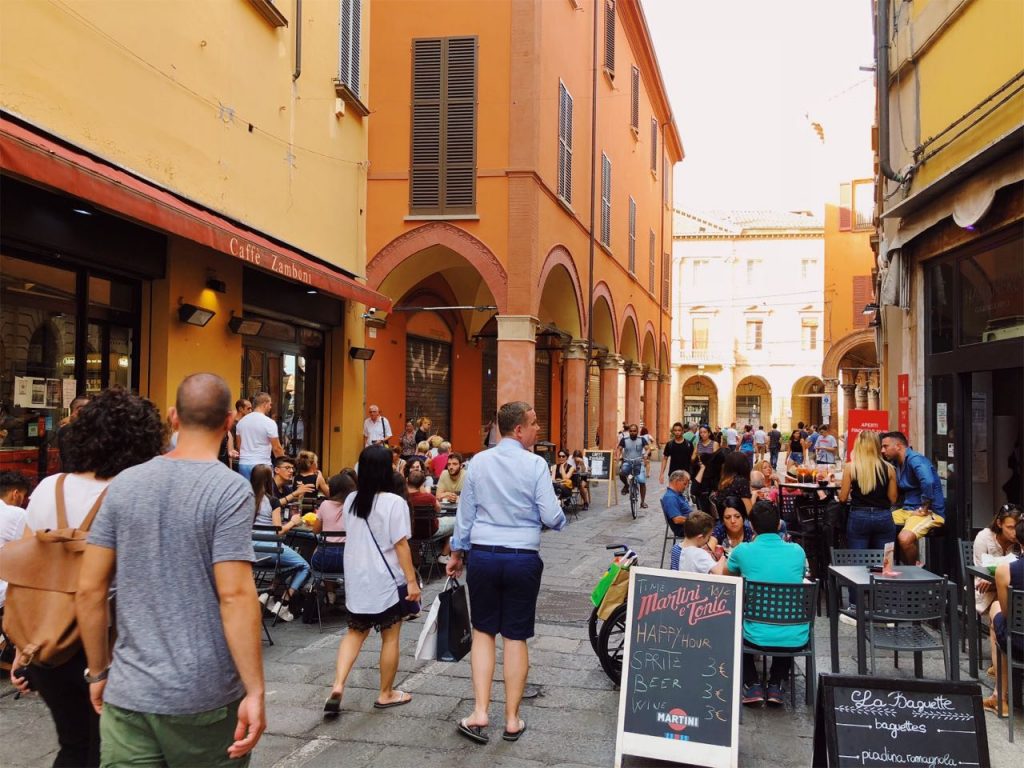 Bologna is full of restaurants

Beautiful historic center – what to see?

Once you are in the city center of Bologna you don’t need to use public transport to see all its attractions. They come one after another and you just have to walk around to find them all.

Bologna is proud of having one of the biggest and well preserved historic centers in Italy. Every building there is around eight centuries old! When you find yourself on Piazza Maggiore you’ll be surrounded by Medieval buildings that stand still and await to be explored.

The famous Fontana di Nettuno or Fountain of Neptune was built back in 1563. It is a big lavish fountain that locals call il gigante or the giant because of its size. Palazzo Comunale or the Town Hall, as well as Palazzo del Podestà or Podestà Hall, are also located on Piazza Maggiore. These date from 13th and 12th centuries respectively. 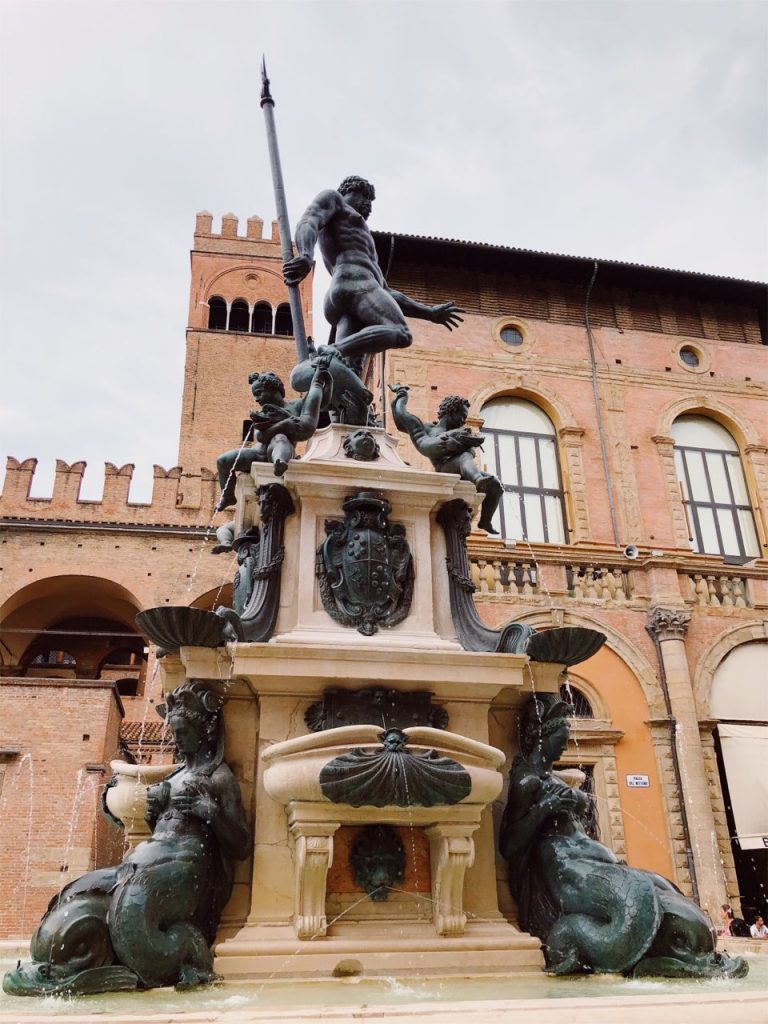 The Fountain of Neptune on Piazza Maggiore in Bologna

The most impressive building on the square is definitely the Basilica of San Petronio. Also known as the Duomo of Bologna, this is the 10th biggest church in the world. The plan was to build it twice as big and all in marble, as the entrance. However, the money was never enough, thus only part of the front is decorated that way. In my opinion this makes it much more interesting.

The magnificent Basilica of San Petronio on Piazza Maggiore in Bologna

The Medieval Museum, the Archeological Museum and the Archiginnasio are located nearby Piazza Maggiore. We managed to visit the Archiginnasio and really liked the Anatomical Theater inside. It’s a beautifully decorated wooden hall that was an educational medical center where dissections took place. There’s nothing morbid or scary about it. It is suitable for all ages, so you can definitely take your kids. 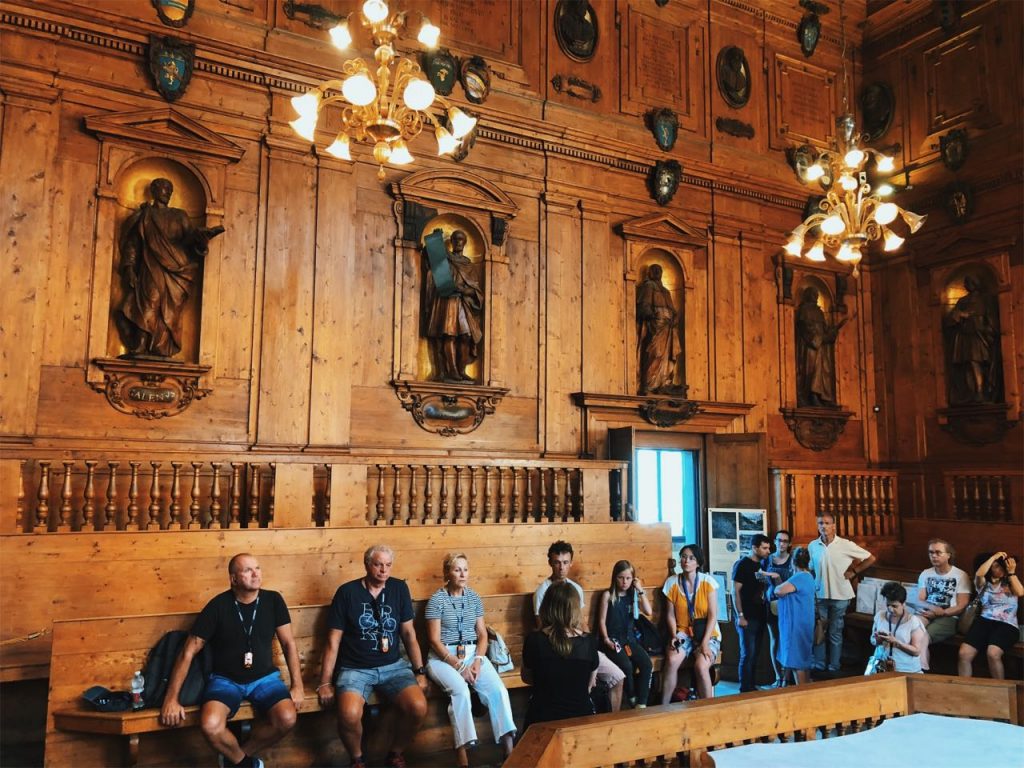 At the Anatomical theater in Bologna 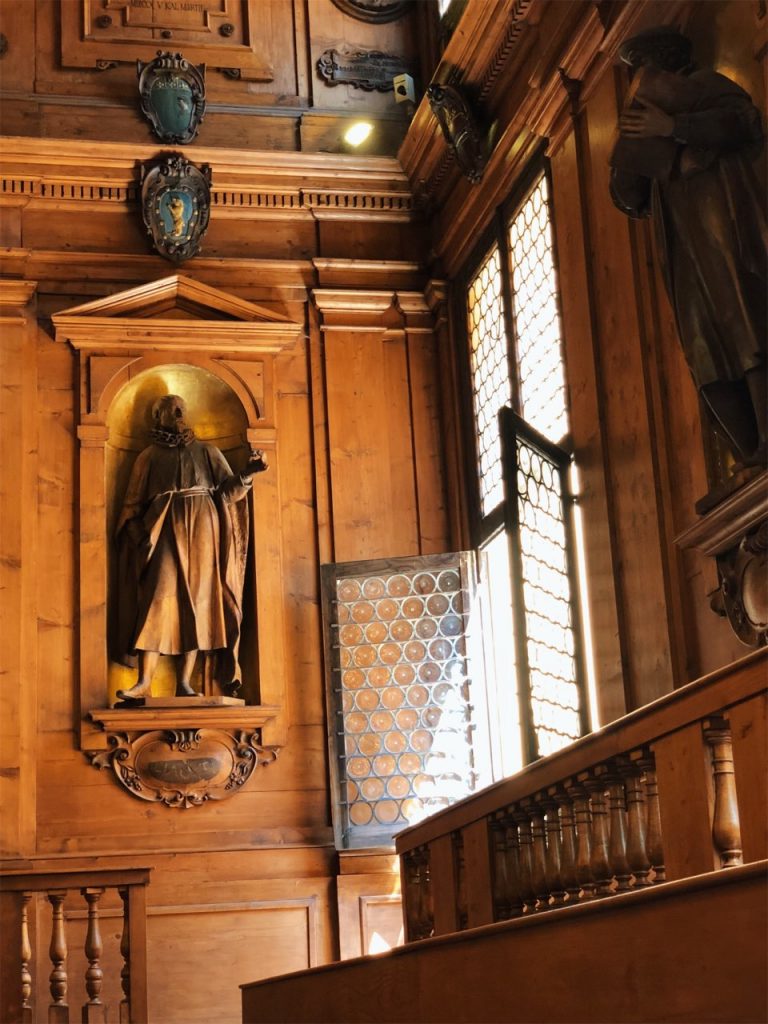 A fragment of the Anatomical theater

The two leaning towers of Bologna

Right next to Piazza Maggiore are two of the landmarks of the city – the two leaning towers of Bologna. Asinelli tower is the taller and Garisenda tower is the shorter one and they were built between 1109 and 1119. At first I was not sure whether just the tallest tower is leaning or the two of them are. Turned out the smaller tower is more leaning.

Visitors are able to climb up the 498 steps up to the top of the Asinelli tower and see Bologna from 97.2 meters’ height. Well, since we were traveling with baby Anna, we passed this one. I am sure the view up there is worth the effort of climbing. 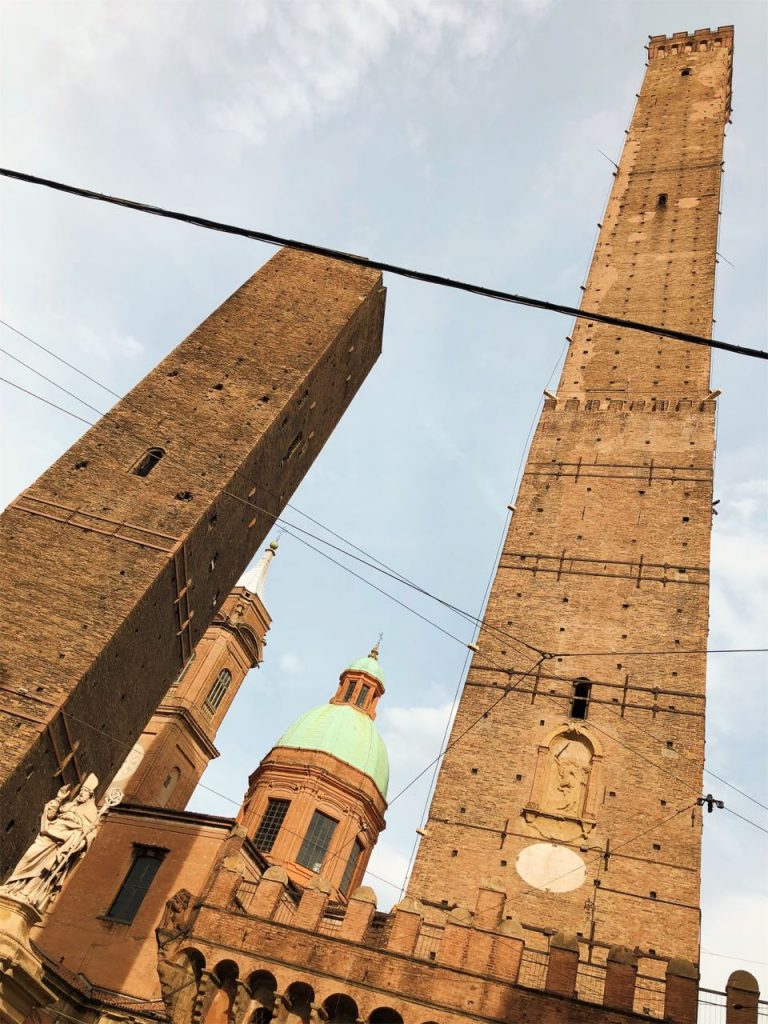 In the 12th century, it was a trend for rich families in Bologna to build towers to show their power and significance. At the time there were around 180 towers in the city. However, only about 20 survived and are visible today due to the fires, lightning strikes and wars over the years.

A place that I liked a lot, because of its tranquility and spiritual energy, is the San Stefano complex. It consists of seven churches. One of them, Santi Vitale e Agricola, is the oldest church in the city and dates back to the 5th century. There were almost no other visitors, which made our experience there even more pleasant. It was like if we reserved the place for ourselves. 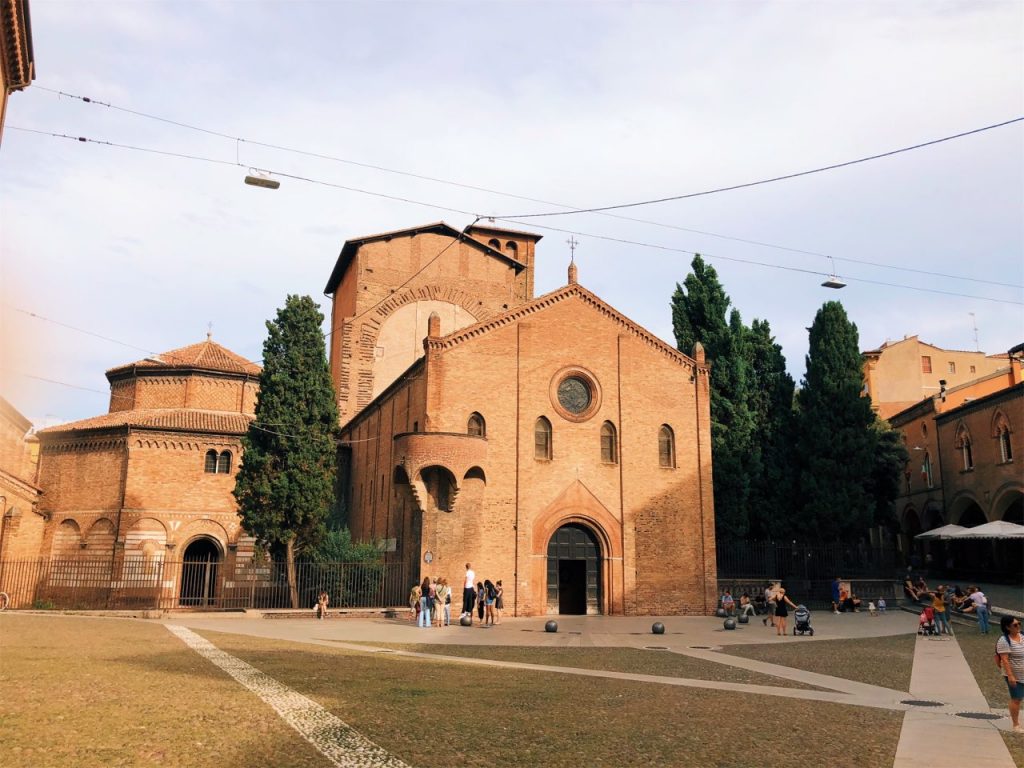 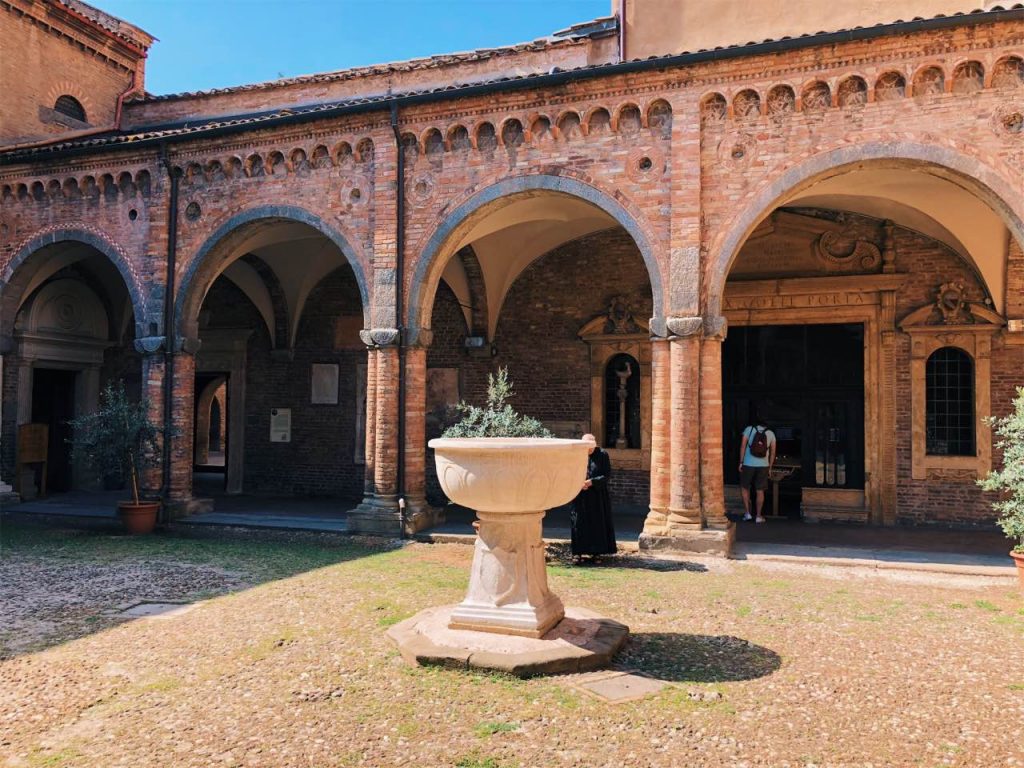 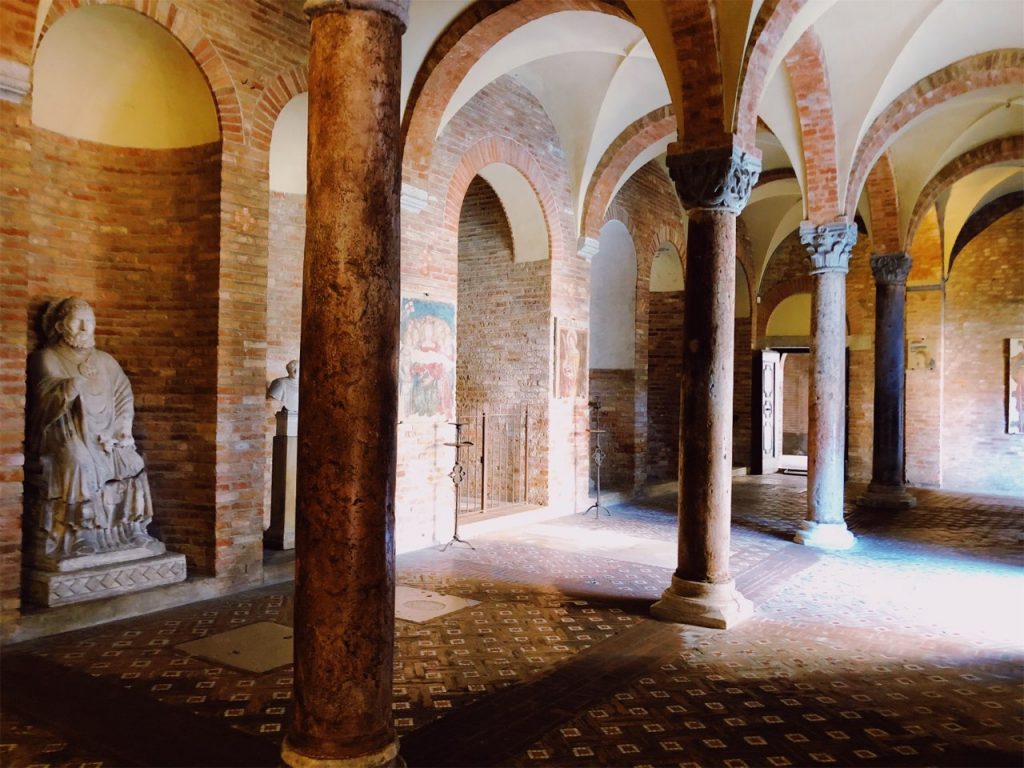 At the religious complex San Stefano

Bologna with babies and kids

Unlike many European cities, Bologna is almost flat and it is easy to push a baby stroller around. Riding a bike is also easy to do. Climbing stairs is not that fun with a stroller. You’ll have to decide whether to climb the stairs of some of the exciting places in Bologna if you rely only on the stroller. The Asinelli tower is the most challenging to climb in Bologna, but if you use a sling, you’ll be fine.

There are some small park areas in Bologna, which are suitable for breaks with your children. Also, the city offers a lot of spacious squares where kids run around and play. 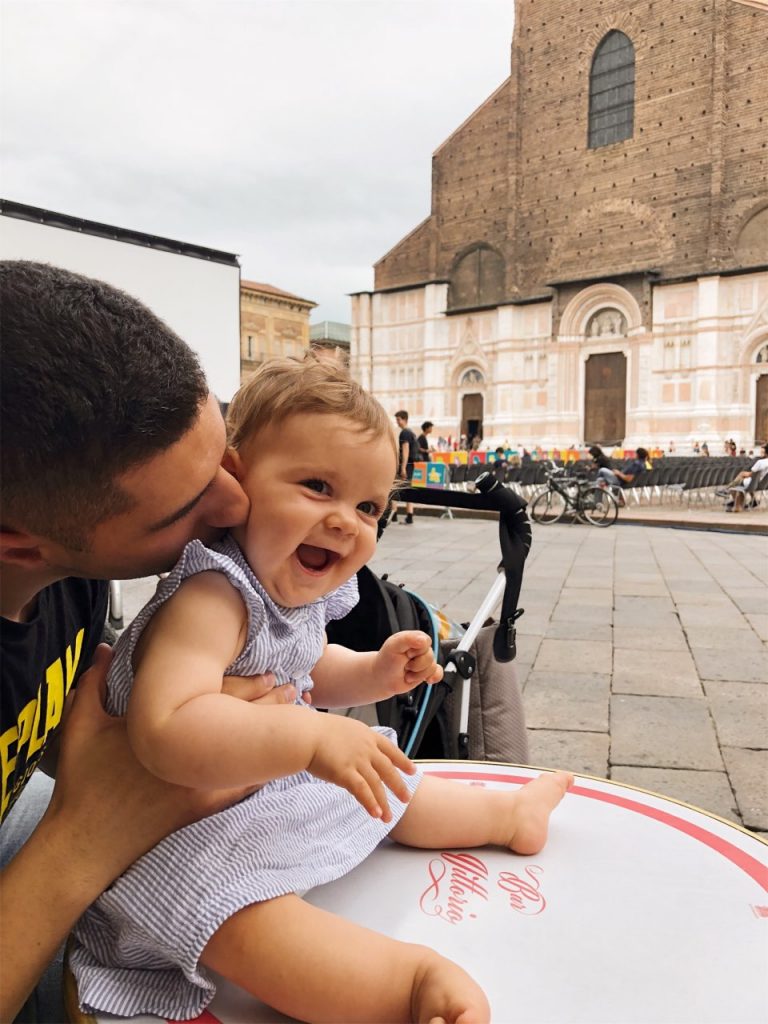 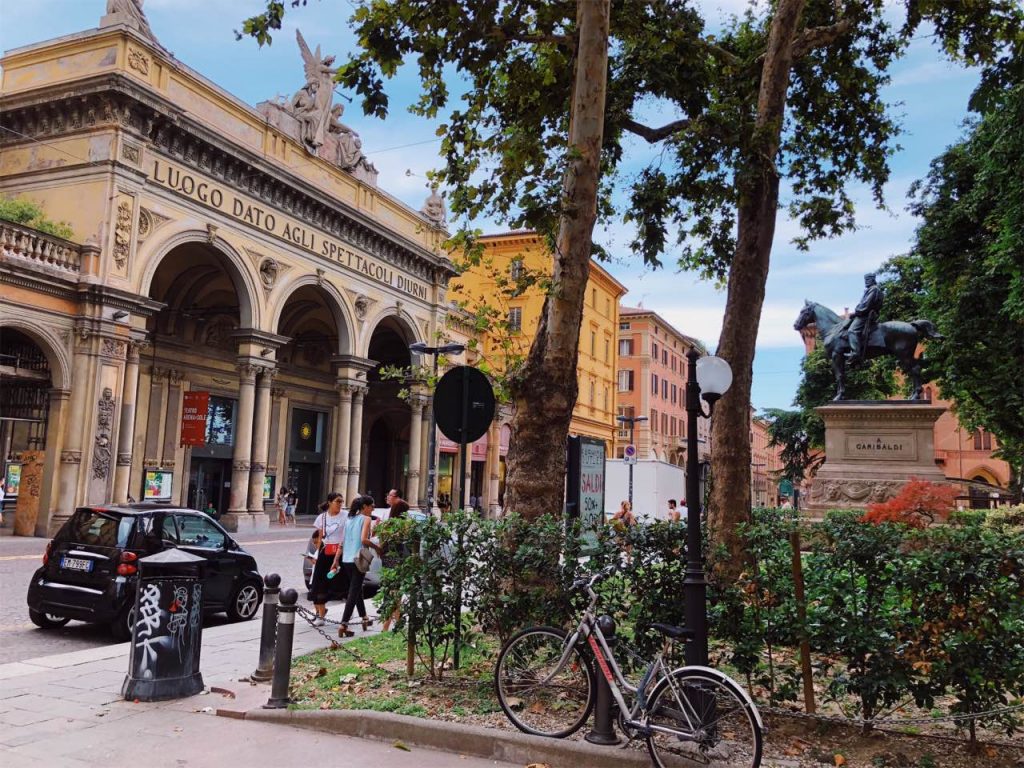 Small green areas can be found in many places in Bologna

How long to stay in Bologna?

My family spent three days in this amazing city that enchanted us for life. I consider this time enough to get a good impression of the place and visit many of its attractions. We are already talking about visiting again since we liked it that much! Two or three days is good enough to explore for the first time and decide for yourselves. Organized excursions rarely include Bologna in their programs in Italy, or pass through it for a day, on the way to Florence. I don’t think a day is enough at all, but it is still better than nothing. 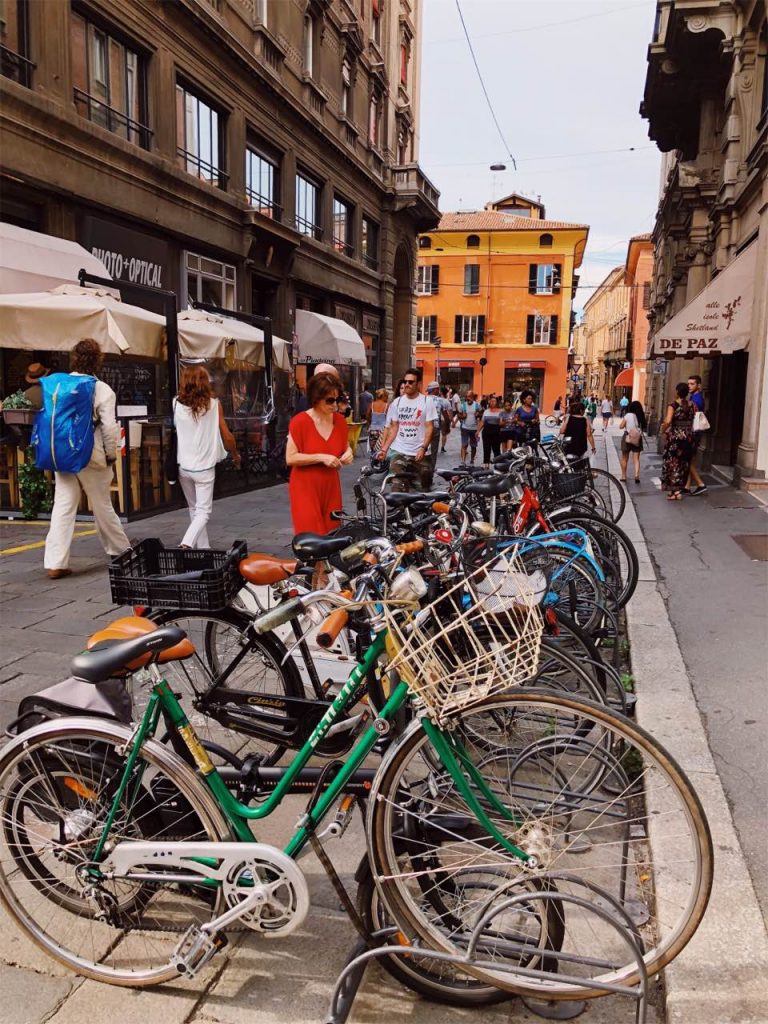 Bologna is flat and bike-friendly

If you want to get a real feeling of Italy without the crowds that are inevitable in cities such as Venice, Florence or Rome, try out Bologna! This city will charm you and you would think when to visit again 🙂