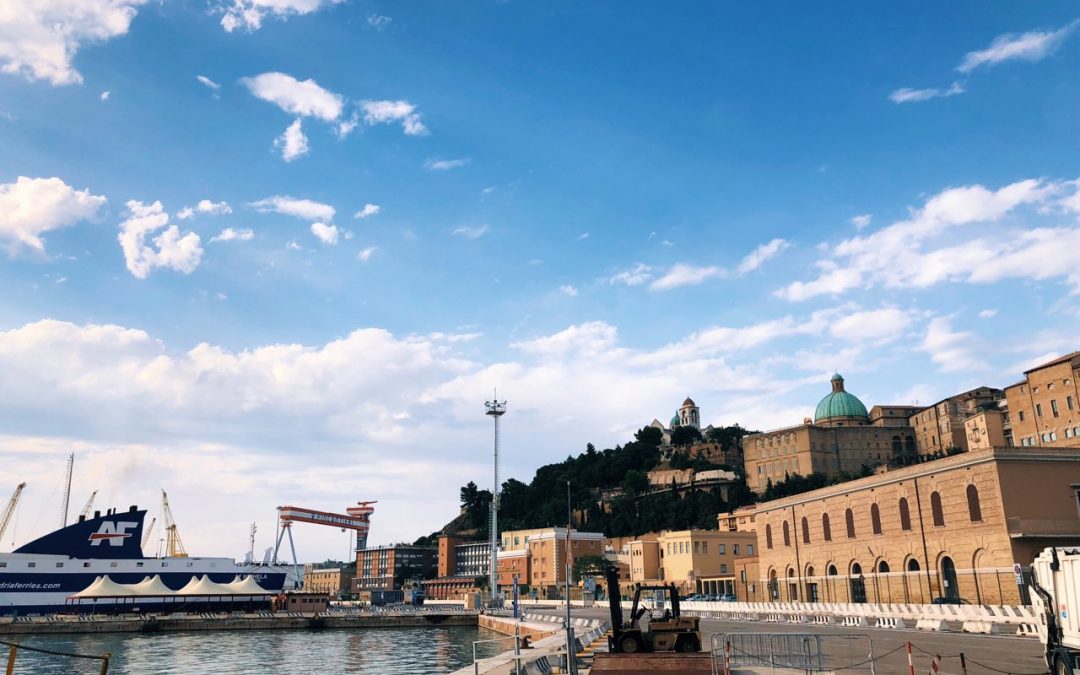 Ancona is the capital of the province of Ancona and the Marche region in Italy and has a population of over 100 000 inhabitants (as of 2015). This surprised me as I never thought it was a city that big in terms of people living there.

Ancona is also one of the biggest ports at this side of Italy and this is actually what brought my family here. Traveling from Croatia and not willing to fly, we crossed the Adriatic Sea with a Jadrolinija ferry from Zadar, Croatia, to Ancona, in order to reach Bologna, Florence and Pisa afterwards. 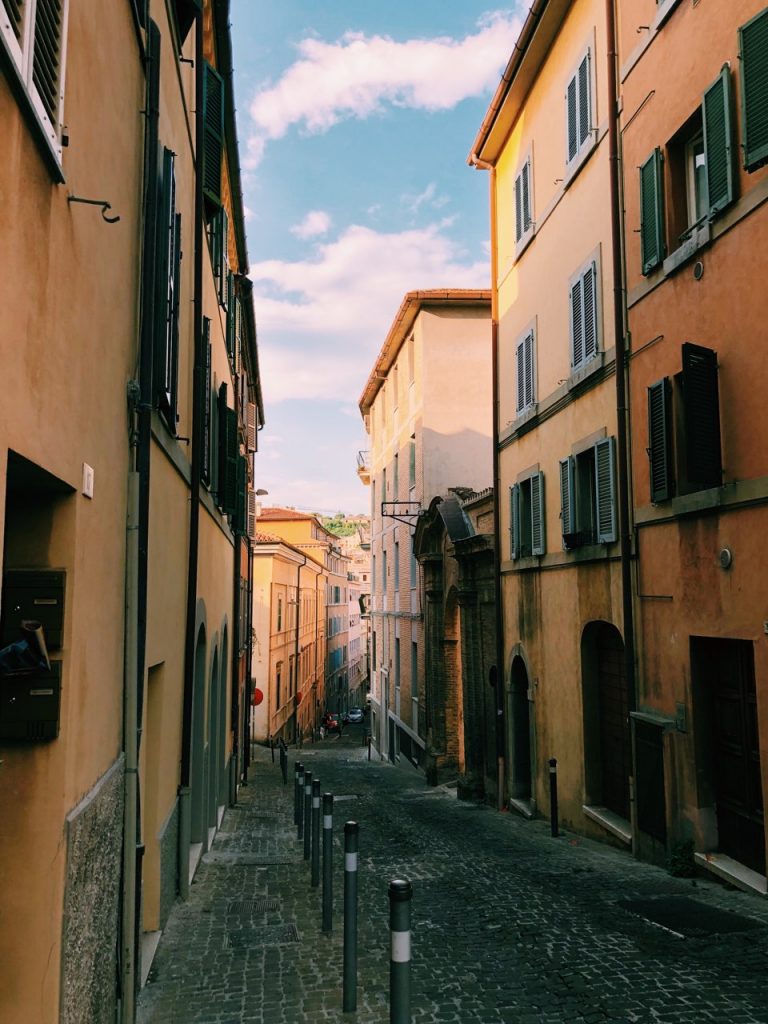 Wandering on the streets of Ancona

We were just passing through Ancona, sleeping there for a night when we arrived in Italy and then for another night before we were going back to Croatia. We had no time for sightseeing. Still, going from the harbor to the hotel and the train station and searching for restaurants secured us seeing some parts of the city. 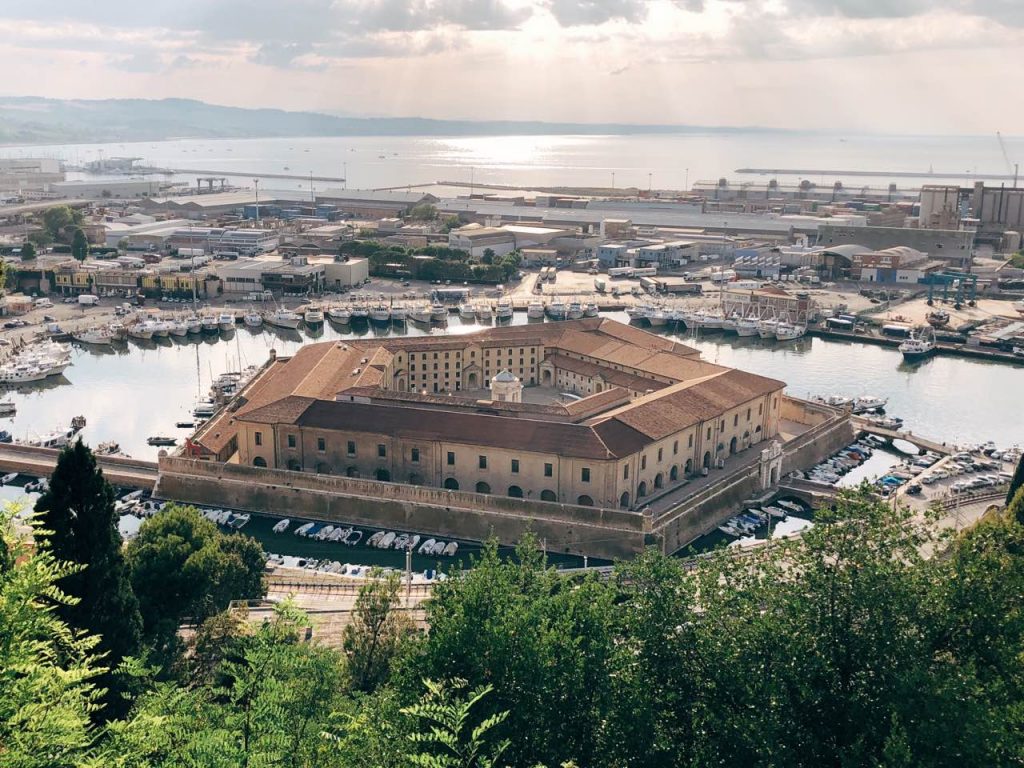 We stumbled upon this great view after taking a wrong turn

The typical Mediterranean architecture and the wooden window blinds are present in Ancona. Being on the sea, the city goes uphill, which makes it charming and provides nice views.

There are a few famous and probably pretty nice beaches around from what I read before going to Ancona. I had a look at the seaside while being on the train to Bologna. Also, there are several historic and beautiful buildings in the city worth visiting such as the Ancona cathedral.

However, the city was not at all included as a place to visit in my print edition of National Geographic guide to Italy despite it has information on so many places. It’s just that there are so many Italian cities that offer a lot more. Most of the tourists seem to stay in Ancona for a night or two, passing through like we did. 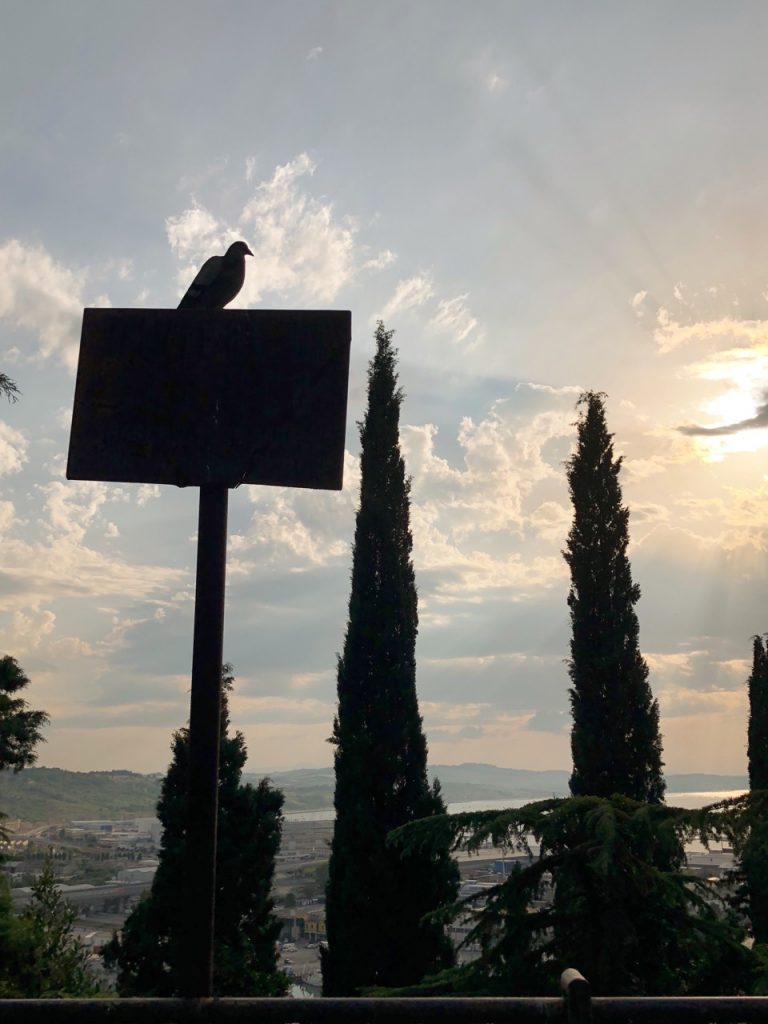 We stayed at hotel Ankon – a decent and appropriate for our budget hotel, but the location was not very good – looking at a parking lot. The receptionist was a nice guy, but the property’s policy on baby beds was not clear, as it turned out.

The first night we paid what we expected. The second night (10 days after) they wanted to charge us an additional EUR 15 for the baby bed and explained that they forgot to do it the first time. I said that I booked hotels that do not charge more for children under the age of two and I am surprised that now they want to charge us. The receptionist then said it is alright and they will not take the extra EUR 15, but the whole situation was a bit uncomfortable. 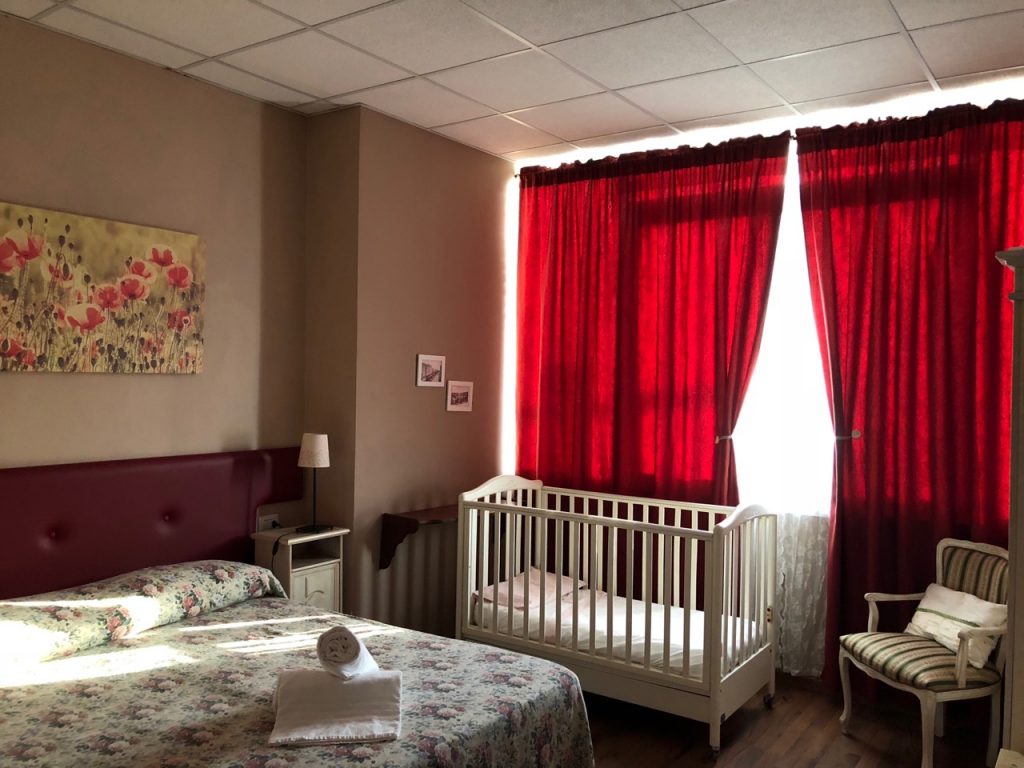 Our room at the hotel 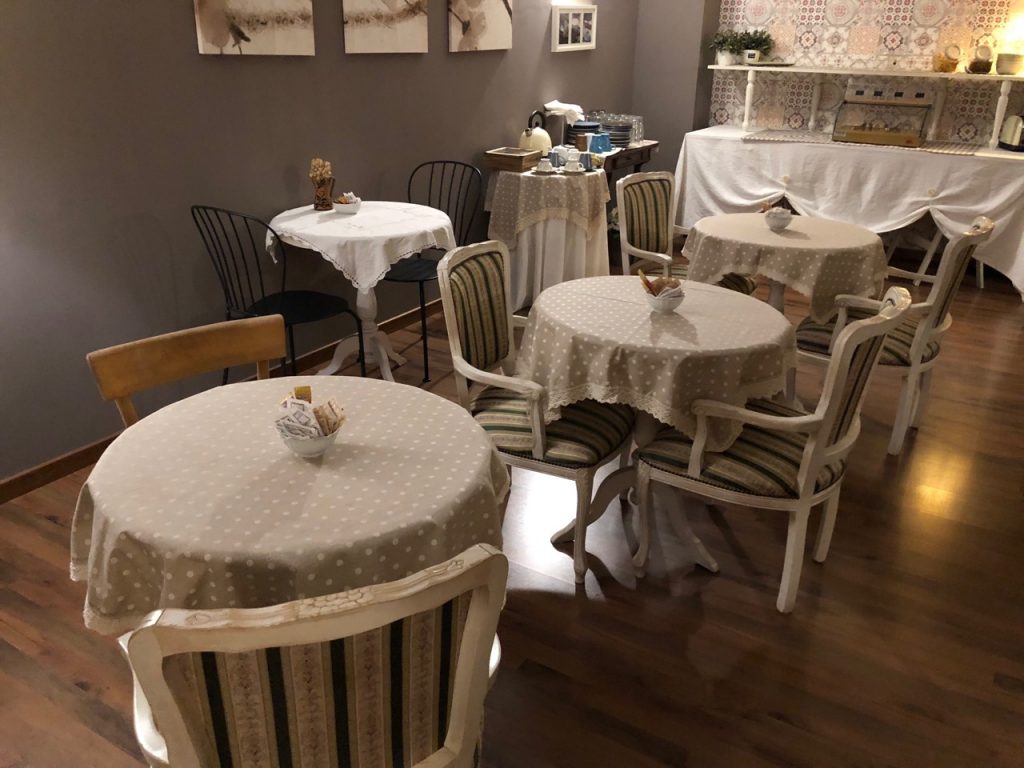 Restaurants open at 8:00 PM. This was a bit late for us because baby Anna goes to bed at around 8/8:30, so we prefer to be at home by that time. The first night my husband went to a nearby restaurant and brought the food to our room. The second time around we had dinner outside at some pizza fast food place, which was alright. The restaurants at the other cities that we visited usually had a break between 3:00 and 7:00 PM.

Be aware of the busy trains in the region

We took the train from Ancona to Bologna (approximately 2.5 / up to 3 hours trip) on a Sunday at around 11:00 AM and it was a train full of passengers. Maybe this happened because it was Sunday. Maybe these trains are always busy, I don’t know. All in all, it was a difficult trip for us and Anna.

We bought class 2 tickets, but were not able to reserve any seats on the train. There was no such option, thus we needed to find empty seats and go for it. We did that, but a couple of stations after some people with reserved tickets made us leave our seats. At this point the train was flooded with people. One could not go to the corridor as people were stuck there. Two guys from our compartment insisted we use their reserved tickets as we were with a baby and so we did. Later on, I let a pregnant woman use my seat. 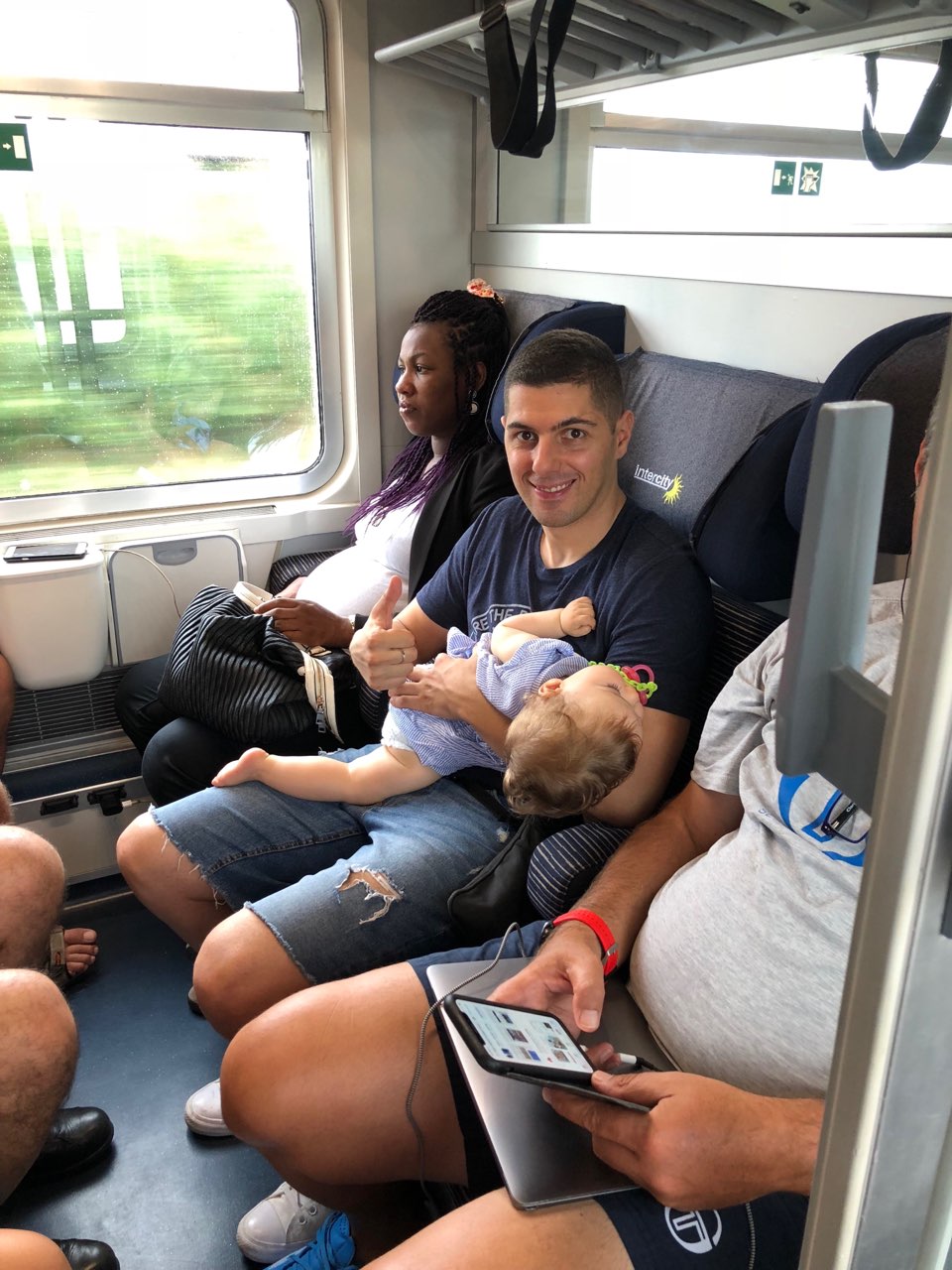 Baby Anna sleeping on the train from Ancona to Bologna

We wanted to reserve seats at first place, but the ticket machine said there was no such option. There are no humans selling tickets at most of the train stations we were at (same situation in Bologna and Florence). We never got to know why we cannot make a seat reservation.

At smaller train stations such as Faenza, one gets one’s ticket from a person, but not here. After the trip form Ancona to Bologna we wanted to reserve seats for every train trip that followed, but again we were not able to. 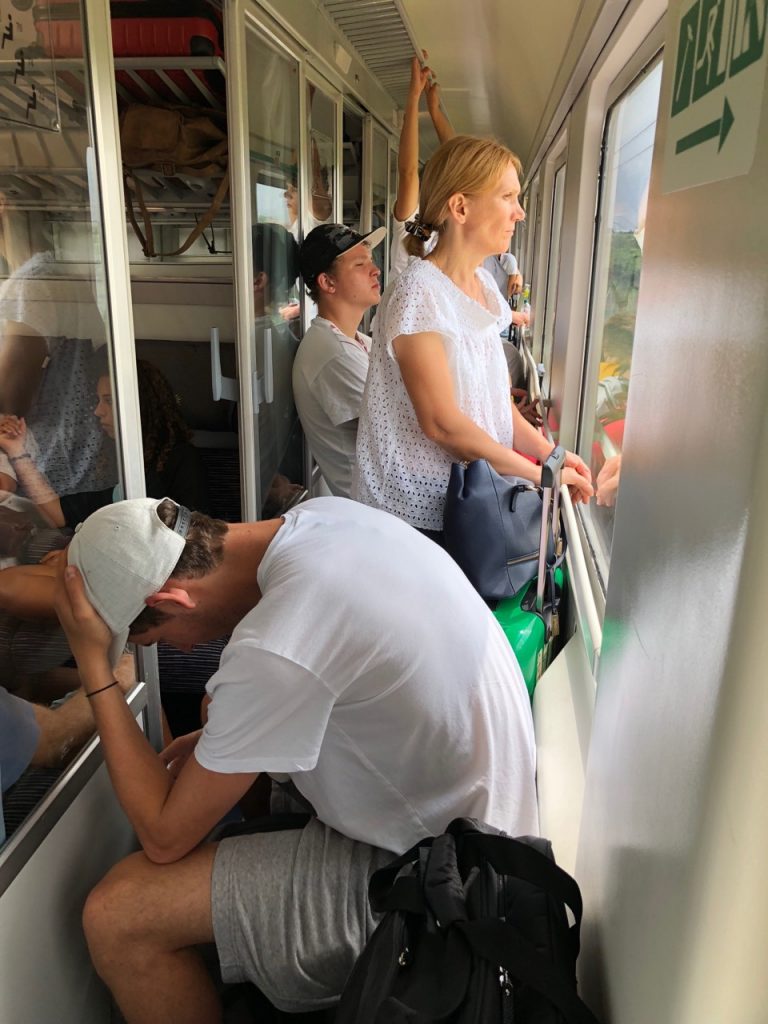 The train from Ancona to Bologna was full of passengers

Finally, we got to Bologna and the real adventure began!